**What you were expecting to happen, and what actually happened

Enemy had 3 troops left, top troop was dead. I cast Vash Dagon on my bottom troop and enemy orbweaver class summoned a replacement troop in the first slot of the enemy. Immediatley the game froze and I could not continue. The screen is of the frozen game.

How often does this happen? When did it begin happening?
Always against orbweaver

There may possibly be more to this. The enemy Arachnean Weaver also seems to be trying to do something, like summoning a Webspinner that wouldn’t fit in. Might need testing if the issue happens if there is only an Orbweaver hero, no Arachnean Weaver.

It is a Webspinner that is summoned, you can tell from the 16 mana cost. Giant spider is only 13(?)

This has been happening for years, literally since the day Vash was released. There’s many threads about it already and devs have investigated but have difficulty reproducing it for some reason

Edit: here’s when I first reported it. There are other threads too [Reported/Investigating] Vash + A. Weaver summon freezes game?

Clear! Issue then relates to two troops bring summoned at same time with only one spot to.piece them in

Not necessarily true. Not saying it’s not a possible variable in this case, but most of the original bug reports are freezes on a single summon. (Edit: also we don’t see a trait animation on the hero in the screenshot, as we do on weaver, so it may be the hero summon isn’t triggered here at all. Also as mentioned the summoned troop isn’t a giant spider)

One theory was that if Vash did enough dmg to kill the summoning troop (in this case weaver), and it still tried to summon from “beyond the grave” due to order of operations of how spell/death/traits are resolved

Bumping up the report… 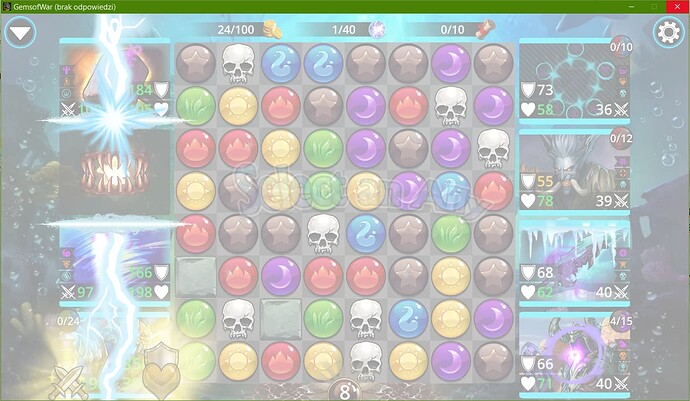 As far as I remember, enemy team was full, I cast Vash on my second troop, and as can be seen from the screenshot, game froze mid-devour.

The screenshot is white-ish, because I thought first that it just froze after switching internet connections for a totally game-unrelated reason, and I clicked on the window, thinking it would go back to normal in a second, as it usually does. But then the window only turned white and became even more unresponsive than before, by going white-ish. I had to force-close it from Task Manager. It is particularly painful as it was during FA, so I lost a sigil 2 rooms into the floor

As far as I remember, enemy team was full, I cast Vash on my second troop, and as can be seen from the screenshot, game froze mid-devour.

But on whose team? I didn’t have Keeper of Souls or AW in my team. Weapon, daemon devoured (I don’t remember what that was, but none of the two, as they are not daemons), Mistralus, and Vash. Class - Assassin, and I don’t have talents selected that would summon.

EDITED: Ah, I see Keeper on the enemy side. That still shouldn’t be happening…