Will you be having the gold sink or the gem sink tonight?

Personally, I’d rather use potions that will speed up the event than use gold to invest in something unbalanced and designed to waste my gold. #hoard💯4life

I’ll have a little bit of both next Friday, thanks

Some people prefer to spend gems over gold. shrug

Iirc ASE has been confirmed at hoard 100 doable by several here on the forums.

Yeah but its a giant pain to do and involves silly amounts of luck. See also: every single faction.

They’ve made it impossible to get all the pets to Mythic. As a completionist, I’m cool with that because that saves me from spending another $50-$100 on the game just for a pet or 2. I’m knocking on VIP 12’s door though so we’ll see how long before I cave.

I feel the same way.

This confirms something we were briefly discussing a while back, that they didn’t really plan on repeating cosmetic pets. This removes me from competing on the pet leaderboard because I have not spent any gems in these pet events. Had we known prior to this, maybe things would be different but I’m finding it hard to care right now.

At least we will be able to get (most) kingdoms to max level now. That’s really what’s important.

It’s been confirmed a man can wrestle a bear and kill it with his bear hands.

Would you line up to try?

This confirms something we were briefly discussing a while back, that they didn’t really plan on repeating cosmetic pets. This removes me from competing on the pet leaderboard because I have not spent any gems in these pet events. Had we known prior to this, maybe things would be different but I’m finding it hard to care right now.

It already got confirmed back in November 2018 by Saltypatra:

That sounds weird. Are you saying that if the birthday were in February, you could give out a greater number of gifts throughout the year? What’s keeping you from moving the celebration to that month? That sounds even weirder. The other special event pets won’t ever repeat, so there won’t be celebrations like Independence Day next year? Sad news.

I’m not sure if it’s been requested before, but couldn’t we earn the Mythic faction pet with 2000 faction points instead of 2500?

It’s been suggested before – and I do like the logic, since Pure Faction Delve is the only time the bonus will ever be used. But I don’t know if there’s been any official response. I suspect it’s unlikely to change.

I’ll be curious to see what they come up with for faction vs faction change
They’ve been making better decisions more recently than before, but this change will require some thought and a major change to be effective
I’m hoping they will ask for some feedback before fully implementing, as these battles have a 99.9% chance of losing, gotta at least knock it down to 90% to be worthwhile

They’ve been making better decisions more recently than before,

I have nothing left to accomplish in this game, no changes could be made to benefit me, but here I am... Still chewing out the developers and publisher who SHOULD know a lot better than me.

This was originally a comment in reply to me having a bunch of keys. But it quickly evolved into a rant. At this point if you continue reading this thread. You simply cannot complain about me complaining. Because you are now choosing to read something that is loaded with opinion based complaints. So if you don’t like to read or hear others complain then practice some self control and move on. For those over 30, you could call this as “A letter to the editor”. (The photo was meant to be a smart…

Gotcha, thank you for the clarification!

We will be rolling this change out within the next 48 hours. Thank you for your feedback regarding this issue!

In-game, I see that the faction pets are now part of the Kingdom, but the Kingdom hasn’t acknowledged them in calculating Kingdom Power. One of my other guildmates had it apply properly. What am I missing here? 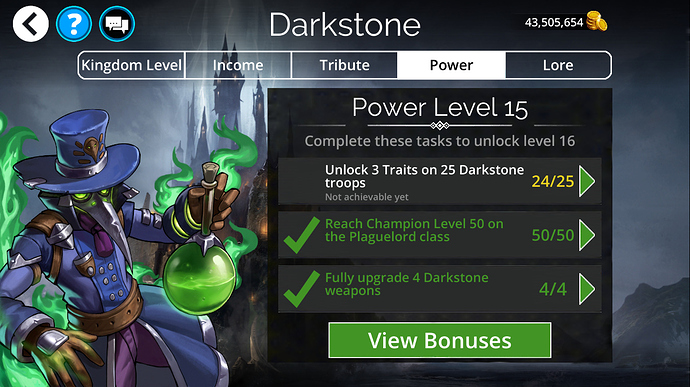 Pointless change if this is intended.

550 LT without a Mythic this week looks to be in our future. Good to know.

PS just doing a rescue did nothing for me.
Did you upgrade a pet or get any pet copies that would tell the broken change to not only apply to certain players who accidentally jumped through half ass worked caused hoops?

lol, figures. Thanks! at least its a vault weekend.

You have to get 1 pet copy to force the change to kingdom stars. Of course I didn’t get a single copy until my 8th battle for a pet that I don’t need.

I have 24 troops listed in my account. Do you own all the Darkstone troops?

Yep. All fully maxed out
Might be some glitch or something