Does tribute reward accumalate in time?

I mean - do I get the tribute only from the hour when I log in, or from all the time which elapsed since previous login?

As far as I can tell it doesn’t accumulate. You get the same chance, even if you wait for days, so always collect as early and often as possible.

Your income gold does accumulate up to 24 hours. However no matter how long you wait kingdoms will always keep the same % chance to give you their individual tributes, % doesn’t increase if you don’t collect every hour. Your best option is to collect every hour so you get the most of tributes.

Well, that’s pain in the neck - it forces players to log in each every hour…
And why individual tribute does not accumulate when gold does?

But whatever - I’ll have to try to login more often

If you play on a smart-phone…the “pain in the neck” takes all of a few seconds per hour to switch to the app (left on in background), then tap the screen where the coins flash. Voila.

The app sucks a lot of power. (and my mobile at least is getting very hot) So you won’t be happy with that…

It really does. I don’t understand why, but good grief.

), but “sacrificing” a minut of your time to get free gems/souls/glory/gold keys, well no one is forcing player to do that. .

Playing the game on mobile definitely uses a lot of battery but having the app in the background works fine for me (‘current’ android).
I do agree that tributes are terrible though - especially since their value has increased so much over the last updates.
I mean I allready dont like increasing daily login bonuses but when even the highest daily bonus possible gets dwarfed by the hourly ‘tribute’…

I understand that it is an important “feature” to keep the players engaged over the day and increase the apparant userbase/the visibility of the app in the different stores, but as a player it is just too invasive (imo).

Well, technically it does and doesn’t accumulate in time. It doesn’t in the aspect that waiting 1 hour or 24 hours would still give the same reward. It does “accumulate” over time by the fact that kingdom levels and stars are likely to be leveled over time, such as things like this from all kingdoms at 20% tribute chance: 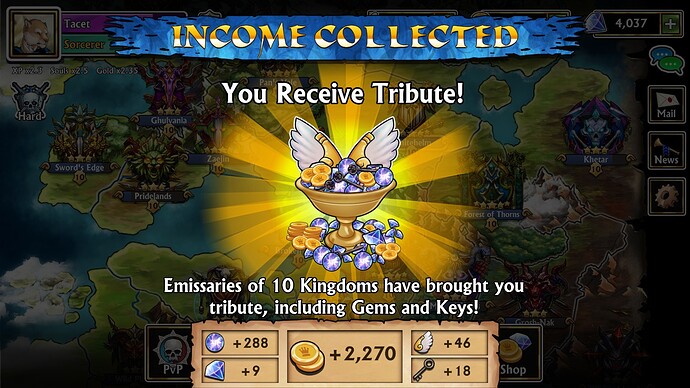 Yes, but I didn’t mean the fact that probability of reward is increased when you’re levelling kingdoms.

It would be nice if the game chcecked the tribute once per hour ang gave it to players regardless they log in or not.

Well, who knows - maybe devs will think about that in the future

What if they already mauled it over and decided that players would abuse it by simply not playing. It would be like saying you got our game but now it is a clicker game that plays itself.

You know how it works…“I’ve logged in to collect tribute, so maybe I’ll play only one little game…or one more…and a tiny treasure hunt…oh, also Arena!” - and You spent another unexpected hour playing the game!

And that’s great! Because then it is time to collect tributes again!!

Your tribute gold does accumulate up to 24 hours.

It may have been poorly choice of words, but you ignored the rest of the answer, which clarified everything.

It clarified the Tribute discussion sure, but you never corrected that it’s Income you get every hour because you don’t always get Tribute, but you always get Income. Two very different things that, without clarification, will confuse the lesser experience players who read these Forums.

Point taken, and correction made.

Well, that’s pain in the neck - it forces players to log in each every hour…

Well yes that’s the whole idea, players should be rewarded for doing something, even as little as logging in - then you may see a Revenge battle flashing, or do something else in the game…

You shouldn’t be rewarded for installing it and doing nothing for a week… gold income accumulates but that’s minor… you want tributes, then work for them! (not that it’s much work… I click into the app every few hours at convenient breaks, like when i make coffee, or go for to the, er, do some, er, important errands…)