Each time we get a treasure map snot-event, i find myself pondering the game mode. And i got an idea that would make it, i think, more compelling.
What is the goal of following a treasure map was to find the treasure?

Right now, we mostly just want to do turns to get snot or extra runestones.

What if…
Most rewards were lowered a bit… but the last one, the unmovable vault type secured-box (let’s call it the bank-safe) had super nice loot in it?
Then, we would not just match stuff for turns, we’d actually, strategically, try to create a Bank-safe.
This goal really makes the mode more fun, more challenging.

Try it now. Go do 5 maps with the specific intent to create a Bank-Safe (instead of just doing extra turns).
Myself i have a 35% success rate. But that includes many success in a row, and many fails in a row too.
It is not that easy, and you actually need to pay attention an look at the board, Bank-Safes are almost never “randomly created”.

So, you do a map, and find the treasure (a bank-safe)! Now you collect awesome loot, and here is the motivation: you get 5 items from a huge list of possible drop. From gold, common troops, Souls and iron keys, to very very very rare stuff like high-level ingots, Mythic troops, Orbs, Vault keys, and everything in between.

I’m pretty sure that everyone would welcome a Treasure Hunt rework, with buffed rewards/payouts.

I suggested in another thread how matching vaults (three or more) could/would/should create a vault key, and how the matched vaults could/would/should then explode (or disappear from) the board, allowing for the cascading of new pieces from the top.

But, read the OP in this thread.

It shows what one person can do in Gems of War simply by playing one game mode.

In general vaults and red chests should contain better loot. Amounts or contents should be upgraded. It’s stupid that this game mode rewards you best for speed and avoiding to create red chests. If vaults had a 1% chance of dropping a vault key, even that would be a huge improvement.

Tried again 5 runs today, only made one Bank-Safe.
It’s quite challenging and I think a more fun way to tackle this mini game.

Please devs, make the treasure worth finding when using a treasure map.

So, most players find that the time spent in Treasure Hunt is not worth the rewards.

And, I won’t argue that point, as the RNG involved in determining a player’s ultimate payout after a Treasure Hunt is kinda bunk.

That being said, my F2P account (see my initial post) was built entirely on Treasure Hunt and shows what consistently multi-vaulting in maps can actually net.

This isn’t me disagreeing with you. I mean, don’t get me started on how souls should not be awarded for creating red chests.

Just saying that the Treasure Hunt mini game can be rewarding. It’s just not worth the time and effort for some.

I know.
It’s just that it’s not that fun, just doing matches for extra turns. It lacks the strategy and fun of a regular game.

That’s why I think that actively trying to create a big chest, instead of just getting extra turns, would had some challenge to the game-mode, and a feeling of success when you do get the treasure

It’s just that it’s not that fun, just doing matches for extra turns. It lacks the strategy and fun of a regular game.

Right, but shouldn’t that happen organically while pursuing vault creation?

I mean, when I play, I take what extra turns (5-matches) are on the board and go from there. The extra turns are acquired and accrued as part of the process of vault creation. The goal/priority is always to upgrade chests to an eventual vault, being mindful to place it in a decent location on bottom.

I never go for the most moves in Treasure Hunt. Rather, I go for the most vaults I can create. For me, this nets the best results in terms of desired resource accumulation ('cause I only play one game mode [a.k.a. “playing the game without really playing”

@TheDragonSeoul you are kind of an outlier among players. You can’t get Zuul’Goth with your playing style. Just for an example. It’s just that your style is not trying to complete Gems of War (as most of the players who dedicate a lot of time to this game) but trying to complete everything that is able to be completed with treasure hunt. I appreciate it, but it has nothing to do with treasure hunt reward gain compared to other game modes.

The value question lies within the math behind different chest types. When you combine 3 green chests to a red one, you lose 3 * 0,25 * 1 = 0,75 gems and gain 1 * 0,25 * 2 = 0,5 gems. It makes no sense even if you theoretically can fill the board with 30 red chests, since this game is mainly about time. If dev’s nerf something it’s usually related to how fast one can progress in game. And us who play other modes also than treasure hunt and are in a guild get glory keys and gem keys cheaper / time from guild tasks than treasure hunt, so the main resource worth playing treasure hunt is gems, and the main chest that we should create is green. That makes this game mode stupid in comparison to other modes.

And I believe even a lower level player with a guild and playing all modes should mainly focus on maximizing gems from maps if the happen to play maps.

This game mode needs updating. It’s still in year 2015 when the rest of the game has evolved a lot in that time. The core mechanics are great and treasure hunt is my favourite game mode. The best feeling this game gives is when you listen to music, relax in your chair and click some 200+ moves matches in treasure hunt. Always a pleasure. 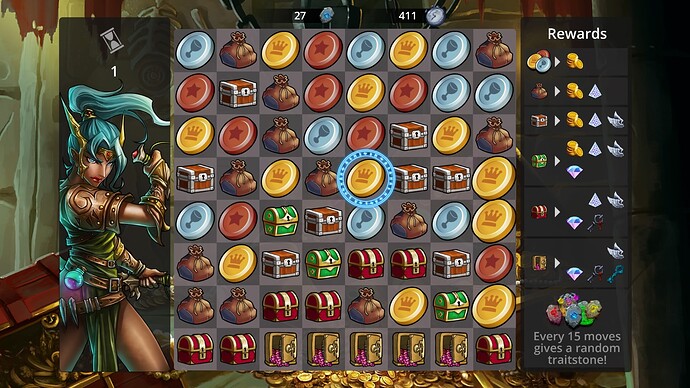 I approach GoW like I do most RPGs. I do what I can, as early on as I am able, with the goal of being OP early in the game.

And, tbh, I will realistically never actually play other game modes. Failing health is one reason, but really, none of the other modes interest me.

Indeed, it does, especially with all the other resources that are required to do things in the game.

And, mitigating some of that RNG when it comes to chest and vault rewards/payouts. But, I’m pretty sure that won’t be a thing unless certain resources are removed as payouts and others added.

you are kind of an outlier among players

I’d be the only one who doesn’t really play this game.

… it has nothing to do with treasure hunt reward gain compared to other game modes.

It kinda does, as it shows just what an account can look like with the rewards earned/awarded from solely one game mode, as well as demonstrates what can’t be accomplished by a solo, low-level player reliant on that game mode for resources.