There's something needs to be changed in Guild Wars brackets

This is a continuation of the topic “Same Thing With a GW Bracket Assignment” that did not draw any attention to game developers at all and it starts getting on nerves. Here’s the story:

My guild, Crazy Russian Gems, was formed on January 2020, within 4 months we’ve reached top 150 place on the trophies ranking, previous GW we were in top 300: 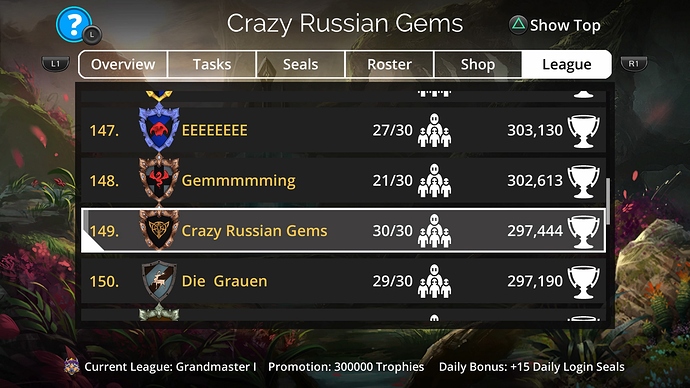 After 132nd bracket in previous GW this time we climbed to 111th, but the picture did not change at all - among all other guilds we are sharing bracket with, only our guild takes ~240k points per day. PER DAY, Carl!

Apart from that, only 3 other guilds are more or less active, the others make 0 points: 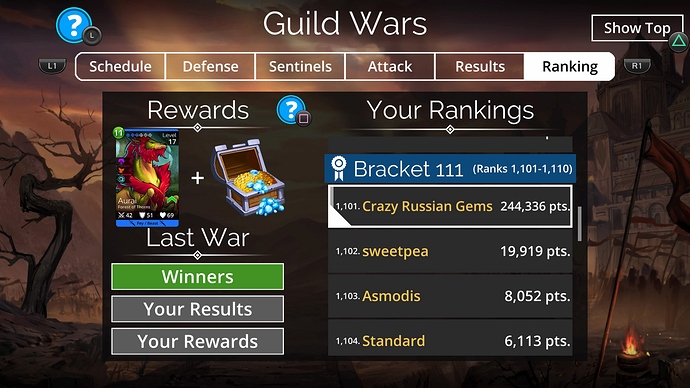 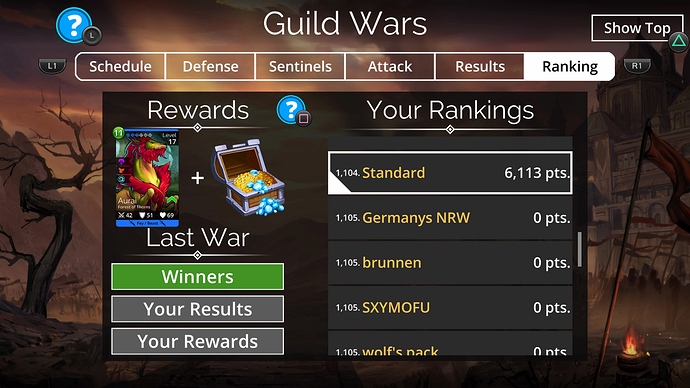 Also, they are making 10 times lesser amount of points than CRG.

In addition to that, the higher bracket’s picture of GW looks even more pathetic (no offence, guys, but it is) 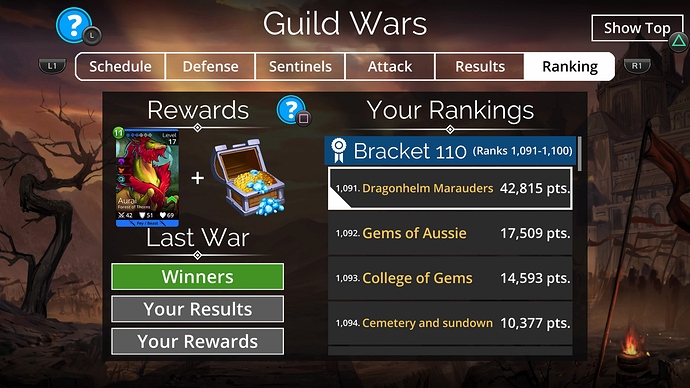 Just to have the complete picture, check out the activity in the 3rd bracket: 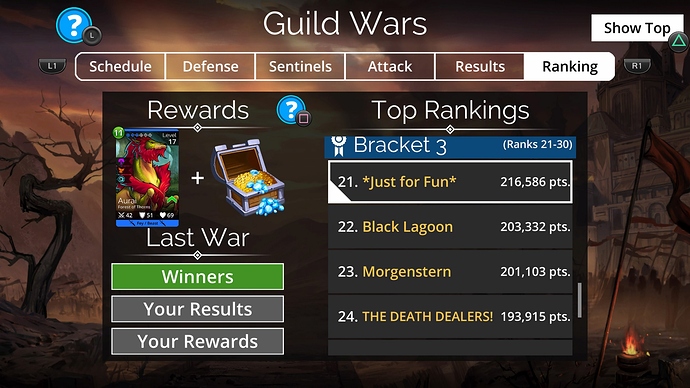 I totally understand that it is much harder to get on the higher brackets, but at least they have somebody to compete with!

Please do something with that algorithm of Brackets assignment to make it more fair, otherwise it does not make sense to even keep this Guild Wars as event in this game.

I hope this message finally reaches developers and next update will include something that improves GW, not only monetization stuff.

GWs are the oldest event in GoW and need a total revamp.
There are many guilds in lower brackets that could bring a huge competition to elder guilds, but unluckily for them it will take months/ages to get to high brackets.

There are many guilds in lower brackets that could bring a huge competition to elder guilds, but unluckily for them it will take months/ages to get to high brackets.

This is the design. It’d be bad for business if the older guilds had to face people who could challenge them. Why do you think they obsess so hard over fighting any change to the brackets as, “You need to learn how to play the game”?

As is, the fastest way to the top is to quit your small guild and join the old guard.

An easy change would be to have a required minimum number of guild members (15? 18?) to be able to register for GW.
It’s called “Guild Wars”, not “Single players opening a guild Guild Wars”

A player limit sounds great. I could get on board with that.

Not the only parameter, unfortunately, but sounds sane. Another factor as i was suggesting previously was the Trophy place. And one more - that was suggested by one of the user here is the previous GW activity.

I’ve always felt the best bar would be a tangible cost for registration, not player minimums.

Every time minimums are brought up, a lot of people complain their guild is just a bunch of friends or family members and they think it’d be dumb if they were excluded from a game mode due to that. They have a point. The rewards for “just being in a bracket at all” aren’t much worse than the rewards for “winning your bracket” for 99% of players.

So I think GW as we know it is a good mode for some game that’s not Gems of War. It only works as-is if every participating guild is competitive. It’d be better if a World Event ran in conjunction with GW. I think if they did that and removed rewards for being low in your bracket, it’d discourage most casual guilds from bothering. More so if a cost was attached to registration, say a 5m gold entry fee per guild. That’s not a lot at all for a competitive 30-member guild, but a 6-person family guild won’t see the benefit. But they wouldn’t feel like they were “losing rewards” if there was a concurrent event running and GW was known as “only worth it if you’re competitive”.

That’s an outstanding idea! And also a good encouragement for ones who actually want to compete. I’d rather spend some in-game money to pay this fee. Also, as a good reminder apart from statue tasks it would be great to have GW entrance cumulative “bucket” that would appear after the guild is registered for the next GW.

That won’t hit the budget if every week guild members would pile up their bucks to this event in a timely fashion, so by the end of the 4th week if this bucket is not filled, guild is not participating.

I can’t see GW ever changing much since there is no real gem sink involved in participating in it unlike all subsequent events released since.

I can understand it might be somewhat frustrating you are in a bracket with several guilds that do nothing, I’ve been there too with my guild.
However it’s as with everything else in life, no good thing comes without effort. In this case the effort is to hang in there and fight your way to the top as all the top guilds did.
As for changing it … sorry pall it has been here since the beginning and I love it the way it is. And trust me, I’m not a newbie to the game.
However I do agree something should be done about non-active guilds in GW.
The way I see it it would be a good thing that a guild who was inactive in two GW’s would be removed from the list.

I think they should use the average of the last 3 guild wars for each guild. Highest 10 overall averages are in bracket 1. Next 10 go into bracket 2 and so on. Naturally for an active new guild it will take 3-4 months to get to about where they should be, but I think that will be a lot quicker than moving up a few brackets each time as is done now.

The guild I’m has been pretty stable between bracket 21 and bracket 28 for a year or so now. There’s usually a couple guilds that are obviously on the way up and really shouldn’t be in our bracket. There may be 1 that’s heading down.

The good thing about the state of guild wars now that is so fundamentally flawed that just about any change to it would be an improvement. Here’s an idea.

To participate in guild wars you must have at least 27 members.

Next there is a 1500 gem entry fee. This can be paid by any or all of the members, exactly like completing a guild task. This creates the prize pool.

Each guild fights a random guild every day.

Bonus points are awarded if your defense teams win.

If your guild wins that day, you get their guild leader’s head on a pike as a special collectible you can show off in global chat.

Prizes are awarded based on score with the higher scoring guilds winning the gem prize pool. There will be a leaderboard for the top 100 guilds. Everyone who completes all their battles will receive chaos orbs and other goodies.

Got idea for algorithm for bracket assignment:
1. Count points for each guild

3. Rebalance brackets
if above assignment leaves brackets with 5-20 guilds, move them to different(lower,higher brackets)

This kind of algorithm should be executed after each guild wars finished or maybe once per 3 months?

There are some ideas here, some questions, possible configurations. What do you think?

I don’t see why small/casual guilds should be excluded from Guild Wars by hefty entry fees.

That said I understand that its no fun fighting the same guy five times because he is the only member, or if there is a problem because the last player left the guild before the end of the week.

Maybe there should instead be a requirement that at least say five members of a guild would have to sign up for the guild to be entered into GW.

What do you think? @Rosenkreuz1979 @madking @Redi1

It is interesting but I am not sure players would like it. They have a pretty easy and direct way to confirm moving up and down the brackets now. Having something like this would require some real calculations to see where you end up. Regardless thanks for putting the time in on it. It is interesting for sure.

I think it would be nearly impossible to put an exact point value on the difficulty of each GW bracket. A player who scores 55k points in bracket 2 could find themselves scoring 45k in bracket 1 that same week. The gap only gets more broad as the brackets decrease.

I honestly try not to make braggodish posts anymore. Once upon a time it was necessary to get my guild name on the map. And that kind of behavior is no longer necessary.
That being said…

There isn’t any other guild on PC/Mobile that has moved up more brackets in Guild Wars than my own. I understand the process isn’t perfect. But if a guild is good enough then eventually they will make it to bracket 1.
I get that the system may feel frustrating. That folks feel like bad asses when they are on easy mode. And it’s very possible that they are bad asses when it comes to guild wars.
But unless they have a guild of vets who have all been in GW bracket 1 before. Then they have no business in bracket 1 at this time. That could change next month or 2 months from now as they advance in brackets and gain more experience though. I’m not saying they don’t deserve a shot eventually. I’m saying the advancement in brackets is a necessary learning experience one.

My guild was created in December 2016, was maybe in the top 1k (this was before 4x and trophies everywhere) by March of 2017 when guild wars started and the originally the brackets were 100% based on the Guilds Rank on the LB. It took us 7 months of getting 1st or 2nd in every bracket before we made it to bracket 1. Guild wars was every week back then so now it would take us 28 months now
I totally get that it sucks. But that has to do with the frequency of GW. In 2017 in took us 28 GW sessions and in 2020 it would take us 28 sessions.
So outside of GW being more frequent. There really isn’t a more plausible solution to have new guilds move up in the system.
You’d have better luck figuring out world peace or getting Trump off Twitter. (Which 98% of both parties believe he tweets way too much so not trying to start a debate here.)

Looks really promising, if only it was PS4 =)

Yeah I think AWR is identifying the problem and this is what stinks:

If you are as good as AWR’s guild, it is going to take you 2 years and 4 months to think about being at the top of GW. That’s basically a big “DO NOT ENTER” sign.

That’s part of why I said GW as it sits is a good mode for a different game. 28 weeks is about 7 months, I don’t view that as an intolerable amount of time to climb an F2P ladder. I don’t know where the line is, but 2 years is longer than I think any reasonable person expects it to take to “be competitive”.

So if GW can’t overlap with the weekly events, I’d rather see it drop off the map. It causes more controversy than any other implemented mode right now.

I have seen a lot of complaints from guilds in low GW bracket - that they need to play a couple of years to move to competitive bracket. No solution is perfect to help them, but maybe we can do something.

How about if this bracket reassignment took place only on lower brackets (below #20 ) ?

If we come to conclusion “its good way to do this”, maybe developers will think similarly.