lol i knew it would be horrible but not that much, bone dragon really suck now, he lost his charm

Was to stop all the bone-courage cheese going on. Lol, I actually have to play with my eyes open now @Rickygervais

2 turn or one turn

i see 2 turn on death text 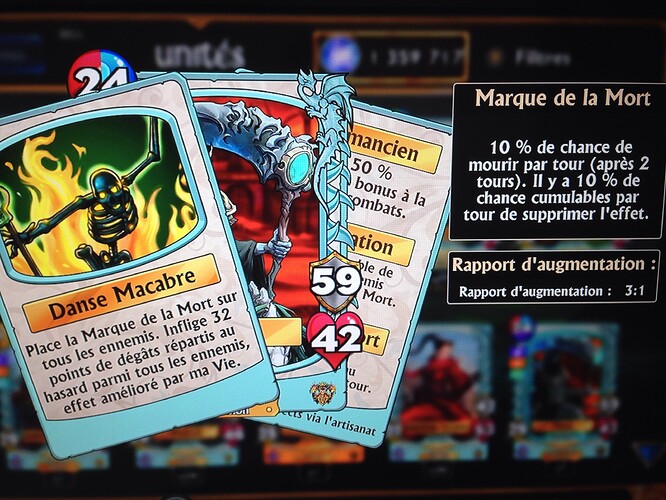 Should be one turn

Hey guys, this is a translation error regarding death mark. The team are working on a fix for that now. It’s still 0 turns and will be made one turn in the next update.

@Saltypatra do you know if we gonna get pharos ra this friday or next week?

@Stan
Do you know what Troops are going to be added into the Chest drop table this Monday from 4 weeks ago?

It’s in the OP. Obsidian Golem and Lady Ironbeard.

He was released this morning

Let me doubt about it, i don’t see any official news

Edit: nevermind i found it

Originally published at: CONSOLE: A New Mythic Approaches – Pharos-Ra – Gems of War Meet the Ancient God of Khetar. New Mythic Troop: Pharos-Ra [image] Before the wars ruined Khetar, before the Keeper of Souls made his home there, before even the Settites, Anubites, and Bastites had built their first temples… Pharos-Ra walked the lands , raising life from the dust. While few cults remain to worship him today, they all fervently believe that he was the source of all living beings in Krystar…

Original post updated for 3.0 update and release of Pharos-ra. Even though the Guild Wars troops are unobtainable until Guild Wars actually starts, I am counting them as released since they are in the troop list (PC/Mobile players don’t have them all yet, either). With that, we are nearly caught up on troops (only 18 behind).

In @Shiratori’s honour, I am abandoning my “no predictions” policy and taking one last stab at how I think things will unfold over the next few weeks:

Nim has already announced that we’ll get Nyx this coming week (plus Dark Troll and Void Portal) for glory. The following week will presumably be Suncrest, with maybe a Friday release (just after Pharos-Ra ends his exclusive week). They might slip a bonus troop or two into that week (Necrezza and/or Bone Naga?). An Adana event after that and one or two more events with bonus troops to catch up on the last couple weeks of PC/Mobile releases and we’re done with non-mythic troops. I think they’ll run mythic-exclusive weeks every two or three weeks until we’re caught up, but that will still take 6-9 weeks. Even at 9 weeks, we’re still on track for a simultaneous release of the next PC/Mobile mythic in July.

Edit: when I wrote the last couple sentences, I was thinking the release schedule was a mythic on PC/Mobile every 2 months for some reason, when the actual schedule is 1 per month (Kingdoms are 1 every 2 months). With that in mind, they really need to release 2 mythics per month (or one every 2 weeks) on console to make any meaningful progress catching up. I hope/suspect that’s what they’ll actually do.

Although not strictly applicable to this fantastic record of unreleased troops I think it would be great to also keep account of the exclusive weeks for Apocalypse Mythic troops. They will throw a spanner in the works.

Hopes of an increased Mythic drop rate during this intensive catch up period have dwindled.

I think it would be great to also keep account of the exclusive weeks for Apocalypse Mythic troops.

I’m not sure exactly what you mean by that - can you explain?

There was a request to have a exclusive week for apocalypse troops to drop. My understanding is the devs we’re looking into it but no guarantees could be done, just that they would look into it.