The Tower in Vault?

Can anyone confirm it is added to the vault drops?

We have stopped the hunt. It’s most likely not yet available in the vault

Is “the tower” card been released?
if not, on what date will it be released?
Simple questions for clear answers.

@Jeto @Kafka can you confirm if tower is in the vault?
Xenith released already (without notification), is tower available too? I spend over 200 VK in the last week or two!!

440 keys haven’t found yet. But also I didn’t get the world either.

already found 2 copies of the world, so I can confirm

How about The Tower?

How about The Tower

is the Tower available in the vault yet?

At this point, our best hope may be to start a petition for Hawx to become our new mod, in the hopes to get concise answers (or answers at all, instead of the periodic selective radio silence).

Hopefully mod apologists will eventually realize that so many of the issues over the years arise/snowball at this level, and could therefore be avoided/mitigated by getting mods with a different level of dedication and soft-skills.

I can’t confirm if it is in vault drops, but I acquired it in the campaigns after I upgraded. Can’t remember the week.

Hey, it’s not in The Vault yet, when it is we’ll include that info in the weekly blog.

Well at least strength is avaliable. 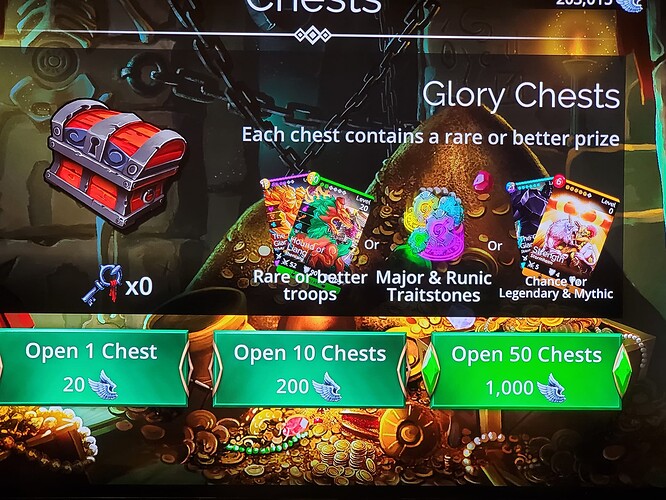 Or perhaps just another great example of quality control.

Also, editing as the legendary/mythic pull is showing the same for gem chests as well

Did anyone pull Strenght?

I’m not sure, i imagine it’s a visual bug, but who knows.

Honestly, i don’t think the Onxy giant is even available either.