Stoned in the Spire

Originally published at: Stoned in the Spire – Gems of War
Last night we rocked!

What is it with mages, shamans, and sorcerers always wanting to make Golems out of the most dramatic, expensive, and indestructible materials available?
Here is our list of the top 10 things we wish some trailblazing wizard would construct a Golem from:

Number 10: The Cake Golem - With the added bonus of having multiple flavors
Number 9: The Whipped Cream Golem - Might go well with the Cake Golem too
Number 8: The Kitten Golem - Thousands of kittens stuck together, controlled by a hive mind!
Number 7: The Weed Golem - 420 Life Points but susceptible to burning.
Number 6: The Lint Golem - Belly button lint will finally have a use
Number 5: The Underwear Golem - Might finally explain where the missing socks and boxers go
Number 4: The Golem Golem - Very meta - a golem made up of smaller golems.
Number 3: The Chuck Norris Golem - Okay, it’s not a Golem, just Chuck Norris with a funny hat.
Number 2: The Beer Golem - Very handy for the post-battle celebration.
Number 1: The Bacon Golem - Bacon > Everything. Defeat him and eat him!

Thrown out of Ettin society at a young age for being too stupid to remember which one was which, Gog and Gud grew up in an idyllic setting on the terrifyingly-dangerous slopes of the Broken Spire. They spent their childhood pranking each other by smashing large rocks on each others’ foreheads; this was easy, as neither of them ever seemed to pay attention to anything that wasn’t shiny. As they grew a little older, they progressed to playing Goose-the-Rhynax, but upon reaching adulthood decided the whole rocks-and-foreheads thing had actually been pretty good fun, so they took that back up again.

Gog and Gud are living proof that if you can survive 3-4 cases of major head trauma every day, you turn out to be mostly indestructible.

@Sirrian the third picture on Obsidian Golem is a repeat, can we see the traits please?

Yeah looks like it, fitting in with the rest of the Giants.

top 10 things we wish some trailblazing wizard would construct a Golem from:

My favorite all time Golem comes from Kingdom of Loathing: The Bread Golem.

“He tempts you with his tasty bread, but you remind him that you don’t live by him alone.”

It doesn’t specify, is the legendary a “event key only” troop, or a buy for glory troop?

It’ll be the former, but yeah it should specify…

Bacon golem makes me sad, since I know most Australians have never had the vastly superior American dry smoked pork belly bacon.

You forgot The Egg Golem.

Australian undercooked plain bacon is the way of the future.

Gog and Gud will be available with event keys, you are correct.

Under cooked as in not even crispy? The horrors…
You and the pomies wet cure your bacon, that’s what americans do to their ham, mostly. A dry smoked cure is reserved for the delicacy known as bacon. Real bacon.
And when Sirrian was in LA last year, you know he was hogging (lol) that awesome American bacon at the hotel breakfast buffet. Once he figured out americans had no idea what vegemite was.

Care to comment on the event specs? Which get the +25% bonus, what triggers event stones, what setup yields extra rewards?

Bacon abuse is no laughing matter. I better go tweet Trump that exporting American bacon to the ignorant rest of the world will help make America great again. Gunboat diplomacy is passè, hello bacon diplomacy. Or smoked turkey for our muslim and Jewish friends lol.

Events will be available shortly after changeover at http://ashtender.com/gems/#events.

Events will be available shortly after changeover at http://ashtender.com/gems/#events. 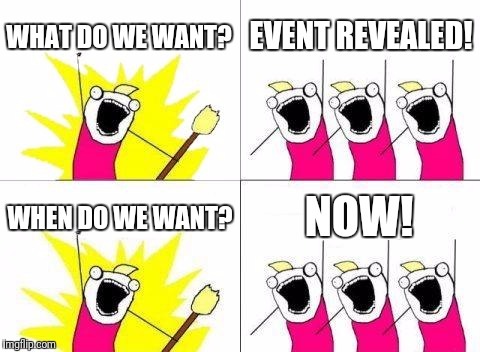