I only mention this because it specifically relates to arcane purchasing strategies, but keep a close eye on your Runic stones as well. You get virtually none (of any useful color) of these a week if you primarily play PvP. Even if you are constantly actively opening your glory and gem keys, the small amount of runics cannot keep up by the time you start buying approximately 16+ arcanes a week from glory packs and you are going to be bottlenecked anyways. This applies even more if you primarily use your gems on VIP chests, where you get zero runics, and still have a lot of stuff left to trait. What I thought was a massive stockpile has severely dwindled since the guild patch.

Even if you can get the mono-blue arcanes next week, it is likely to severely hit your supply of blue Runics, especially if they are already dwindling since recently we have seen several blue arcane types. Also keep in mind that mono color arcanes are essentially useless after you have traited their respective commons, guardian (some of them being not desirable to begin with when looking at costs), and class (and Imp, if you really really like them). Plan accordingly!

Decided to put the data in a different format: 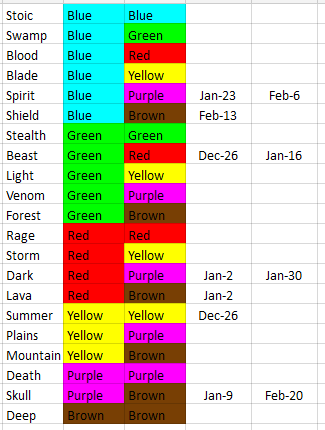 I’ve simply come to the conclusion that a certain amount of Explores a week will be necessary, no matter what. I need the Runics worse than Arcanes most of the time.

You forgot one Red/Brown though

You have that stash because of the weapon bundle I believe. And we also got the same stone next week for 400 price so it was still a value deal.

Except that Legendaries are never available in Glory Bundles and thus aren’t a source of Arcane traitstones.

They are, from time to time, coming in a 500 glory bundle.
When they are not in those bundles, they tend to come as a third new card through the week.

I doubt we will see new legendary troops for 500 glory bundles.

Keep in mind as well this is over a month away and highly subject to change and clarification as we get closer.

That is most likely, but it has always been when we had 2 standard troops as well and each of these come with just 1 non-legendary troop. Also, Spooky Imp was 500 glory for troop + 2 arcanes

That’s because it was imp, imps are not in event chests. . I want to be wrong, but I doubt it.

little bit out of topic, but what about xbox/ps4? Will be really nice too know little our future. Like this, we can save (or spend) glory point for the following week…

Feel free to join us over here:

As the console versions of GOW are now caught up with the PC/Mobile version, I will no longer be updating this post after today. I will leave the chronological list of all troops released on console since the 1.085 update up, with the last troops being those released on December 4, 2017. Please see the GOW events spreadsheet for current information and ongoing history: https://community.gemsofwar.com/t/gow-events-spreadsheet/29260?u=stan Last update: December 4, 2017 Current Console Version:…

As the console version gets closer and closer to synchronizing with the PC/Mobile version, you can see the ever shortening list of troops that will be released on console in the near future. They haven’t said much about how the next phase will unfold, but we have a clear list of troops to expect.

There seems to be a lag before new troops show up in gold chests. I believe it was shorter for cards in a new city. Seems like about a month, but just wanted to see if there was a convention on it.

I ask because I have almost all the common/rare troops in gold chests and plan to stockpile gold keys and then spam gold chests once a month or two to get the new cards.

when a card is added through event and has its event glory bundles then it waits (i think 2 weeks?) till it is added to regular chests.
so you either buy it off the event glory bundle (or open event chests for it depending on rarity) or wait 2 weeks.

It’s 4 weeks actually. Otherwise it’s exactly as you wrote, although in case of Commons and Rares the only options are to buy the packs or wait, they can’t be obtained from Event chests.

You can check Updated "Not in chests" list to see what troops aren’t in chests and when they are slated to be added. 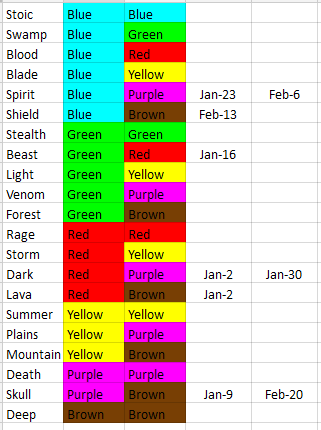 Removed today’s Yellow/Yellow and Green/Red from the graphic. If you can’t afford all the Green/Red you need this week, you’ll get another chance on the 16th.

Monday we get a Red/Purple and a Red/Brown. Wonder if either will use red minors… We haven’t had one in ages while they try to balance usage.

Neither is red minor.