I’ve decided that it would be best to update the previous thread in a brand new thread, so here is the next few weeks according to the information I have.

Legendaries listed are almost certainly in Event keys, not glory packs, but are included for assistance in arcane and event key planning.

As promised by Sirrian, it appears there will almost always be only one troop a week for the foreseeable future.

As always, all of this is subject to change at any time by the devs and updates/corrections from those with better knowledge are welcome.

I believe its primary color is blue since he use Arcane Blood and Blade according to this post (!) Spoiler Alert (!) -- [Any Details Provided are Subject to Change] (Part 1) - #1949 by Lyya

You are the man

Graphical format for quick look up by color 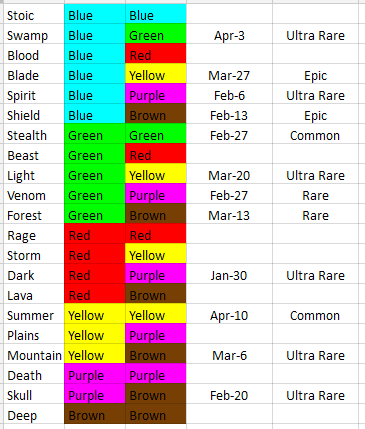 Showing first appearance only. Blue/Yellow and Blue/Purple are set to be available twice.

Took me a while to notice

Surprised Blackhawk only get 1 troop, leaving them at 9 so unable to reach 7*

Also surprised that the next Kingdom doesn’t have an event in March since it means either they break with the normal 2 month window or break with the pattern of new kingdom event the week after it is released.

None of the kingdoms will reach over 13 yet either, so 7* will remain the cap.

edit: Thanks @MakoSipper for correction, Dragon’s Claw will hit 7*

Thanks for the heads up @actreal, i’m better start farming Arcane Venom traitstones because it’ll be a while to get the pack with those.

I believe it was pushed back, and 03/27 is scheduled to be the event Epic of the next kingdom (Blue/Yellow).

Which also answers these:

ANOTHER Blue/Purple Epic at the end of March?

Mythic from Wild Plains (Red/Green/Brown) -> Is it a gnoll

As I understand it, the purpose of this thread is to discuss future arcanes/events only, without getting into details about the nature of the troops. There is room for these discussions in the other general-spoilers thread.

I thought it wouldn’t hurt to ask, but thanks anyway.

Exactly. Meanwhile some other colors haven’t been available for weeks.

Save now, if they follow the same pattern you won’t see an arcane spirt for almost the entire summer and fall months.

Thanks all. Updated and corrected for all posts above.

Is it necessary to save up Blue tunics along with majors and minors for the new mythic. Along with the arcanes?

As promised by Sirrian, it appears there will almost always be only one troop a week for the foreseeable future.
[…]
02/27 Mist of Scales: Green/Purple Rare and Green Common

So it seems not exactly, just mostly ;). Thanks for all the info

It’s exactly one non-common troop every week. They probably assumed many people don’t need mono-color arcanes, so commons always appear alongside another rarity, this way there’s one dual-color arcane every week.