The Soulforge changes are live, apparently brought to us by Mortlach Stoutbeard. The “old event weapon” is War & Peace, which can be readily obtained by completing the Khaziel quest line. If you are fairly new to this game, don’t craft, you’ll be wasting a huge amount of resources on a free reward. If you already did, open a support ticket for a refund, Salty and Kafka promised in global they’d look for a solution if anybody really fell into that trap.

I’d like to use this opportunity to thank the devs for their creativity. After viewing the Q&A stream I would not possibly have imagined that “making old event weapons available again” could be twisted into such an utterly useless result.

Either this was intentional, or purely coincidental, but I don’t believe in coincidences.

You have failed us, completely and utterly!

Nothing new there then.

You’d think if they rushed to do this they’d take care to get it right the first time.

So what are the requirements? If they’re different from what gowdb says, why?

The Khaziel and Adana quest lines are interlocked. Khaziel gets put on hold part way through until you’ve completed Adana, then Sparkgrinder shows up in Khaziel to continue the quest.

Gowdb says “events and bundles only”.

There wasn’t any appropriate tag for it within the game (like “quest reward”), so they attached “events and bundles only” as a workaround.

I’d say it was a mistake in the code, that chose wrong weapon, as War and Peace is not even an EVENT weapon, it’s as a regular weapon as Mountain Crusher for example.

I’d say it was a mistake in the code, that chose wrong weapon, as War and Peace is not even an EVENT weapon, it’s as a regular weapon as Mountain Crusher for example.

No, I asked Kafka about it on global, the reply was that Sirrian personally reviewed the choice and confirmed it to be valid.

Then I’m at a total loss.

I can’t see how it can be justified that it’s an old event weapon, as it’s neither an event weapon, nor old (even players that started tommorow can obtain it from the questlines).

It all, as usual falls into one specific category; inadequate or non existent pre release testing. We were graced with pre faction release streaming in which the actual faction map did not exist. The very same faction was released (temporarily) on time with the same inherent fault. Testing? Zero. Quality control? Zero. They pulled it because they were embarrassed most probably. Every player who spent anything is now potentially a ticket maker. QA is zero.

The Khaziel and Adana quest lines are interlocked. Khaziel gets put on hold part way through until you’ve completed Adana, then Sparkgrinder shows up in Khaziel to continue the quest.

Just expanding on this:

War and Peace Event (the Return)

There’s no level requirement but it does require you to have completed the Khaziel storyline and first the quest in Adana.

Any cities I should complete immediately for weapons or heroes?

Khaziel’s quest line for War and Peace (weapon), though it requires you to have done the first quest or so in Adana before you can do the last few quests in Khaziel (they require you to have met Sparkgrinder).

I think the other part to consider is that the Devs may decide to stop giving War and Peace as a quest reward, which would make it eligible for the Soulforge.

On the whole, it did seem a little bit like, “Ah, let’s just get the Soulforge change out there and we’ll iron out the kinks as we go/deal with problems when we get there” – which to me is absolutely fine – as long as a post is made about it to say,

“Hey, we thought we’d just get these changes out to you as soon as possible

(Yayyy)! There are a couple of issues to be aware of – [names issues]. We plan to address these over [rough time period]. In the meantime, however, we don’t think they will cause too many problems, and we’ll be more than happy to help you out should they occur.”

I really think that’s all it would take to mitigate a lot of the uncertainty, discussions, criticism, etc.!

I do appreciate the generosity and good will of putting the Event Weapons solution forward as soon as possible, now that they’ve figured out how to implement it(!!!) – it does seem strange, though, not to have the jump on the communications side of it (streaming and player dissemination not only didn’t cover this, but shouldn’t really be relied on to convey important details).

There wasn’t any appropriate tag for it within the game (like “quest reward”), so they attached “events and bundles only” as a workaround.

I could see how the weapon would be overlooked if it was tagged like that internally. Shame they reviewed it and still considered it valid.

I could see how the weapon would be overlooked if it was tagged like that internally. Shame they reviewed it and still considered it valid.

Here’s Jago trying to point out that it’s at best a newbie trap, to which the response was that they don’t expect anybody to craft it: 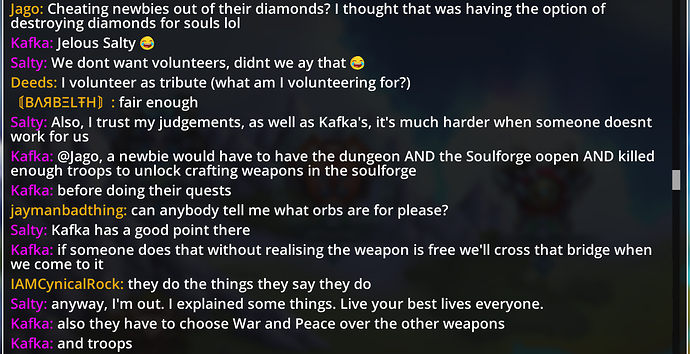 No screenshots of the other parts of the discussion, it essentially boiled down to “you wanted event weapons, you got event weapons, it’s working exactly as intended, we may remove War & Peace as a quest reward to make you happier”.

That’s hilarious. It’s like they intentionally sat down and thought out the most trollish and infuriating way to implement it.

Once again, I had hoped for a much better solution.

Still, it’s better than nothing, but that’s just a bad justification for such implementation.
Inclusion is fine, the problem is its execution.
If we let it slip more and more, we’ll no longer be able to stand up any longer.

I would have done it a bit differently. A bit off-topic here, but it’s worth mentioning:
In the weapons section or category, there would be an icon to craft any unowned weapons. Also, the info there would tell you at least 3 months in advance when certain weapon is scheduled to be in the Store for $5. Still, you could decide what’s more important for you, or just craft it immediately if you have enough resources.

I’ll have more to say later (after my stream), but just jumping in to clarify a few points. No other quest weapons or mastery weapons will be in the Soulforge. War & Peace is an odd one, and though it is obtainable via quest, is still considered in our system as an event weapon.

I hate “newbie traps”, but I feel better about this explanation. Basically, it is “working as intended” (the system is automated, War & Peace is flagged as an event weapon, therefore it can be in soulforge) rather than working as actually intended (which would be you can’t get any quest weapons or mastery weapons from the soulforge). Probably entangled in a way that would take too much development resources to fix.

This combined with the “you kind of have to go out of your way to fall into this trap” global chat interaction makes me feel much better than having the latter stated independently, which comes off as “your concerns aren’t valid.”

(Diamonds > Souls, however, is an intentional newbie trap and I still feel bad about that existing every time it comes up.)

Weapons that can be obtained through mastery or completing a quest line will not be included in the Soul Forge. However, there is one such weapon available this week, War & Peace, that is available. This is because we will be removing War & Peace from its quest line due to some changes we will be making to said quest line. It is an exception to this rule, and should be seen as such.

Actually here is the official explanation.

An easy fix that would’ve saved you guys all this trouble would’ve been to let the weapon say where it was from so ppl click on it and it says For example War and Peace (From Khaziel quest line) Also it’d be good to have that so ppl know where that weapon was obtained from in the past. For people who like to remember the past

This is not good enough.

The explanation is irrelevant. War and Peace continues to be a “newbie trap”. Since the company is now aware of it but has done nothing, it becomes a DELIBERATE trap. And most newbies have no idea of the existence of the forums or the “official” news.

Regardless of how difficult it might be to do so (and I doubt it is), War and Peace MUST immediately be removed from the Soulforge. Anyone who has crafted War and Peace (how many or how few is also irrelevant), must be automatically refunded, and issued a formal apology and mea culpa.

Infinity Plus Two and its staff are not behaving ethically in this instance, and I am hugely disappointed. Even more so by the inappropriately casual attitude towards such a serious issue. I am flabbergasted.

I am glad, but please, make sure to add another label/tag to the game - P2W in combination with F2P.

Why?
It’s quite obvious that if this current system will stay in place, you will be foced to invest money if you’ll want to proceed further, because of Kingdom Stars - weapon-related collection requirements.

While the game is still F2P, however, it limits the ability to gain or craft weapon by just playing the game (in-game time spent only) to obtain certain rewards.

Deathknight’s Armor is not an issue here, don’t get me wrong! That’s the progression boost only.
However, paying around €5 for myself, just because I missed some weapon, it’s a bit too far and it’s not friendly and competitive in the eyes of other players. They have very valid points and arguments.

The best solution would be: Make those weapons craftable, and at the same time, make them available for money. So, you have a choice: you can either craft them, or decide to invest some money to get them. That way no one will get discriminated and the majority of people will be satisfied.