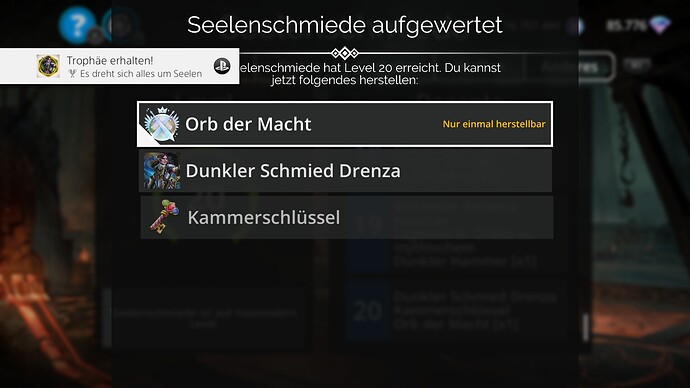 What you were expecting to happen, and what actually happened:
Upgraded the Soulforge to 20, a trophy popup was on the upper left, but is not earned in the trophy list.

How often does this happen? When did it begin happening?
Other users (german, english) had this problem also. Dont know anybody who has the trophy in the list.

Steps to make it happen again
Cant repeat the upgrade, so how can i now get the Trophy /make it visible in the list?

This is also happening for me, and probably everyone. It usually takes a day or two to sync to the servers, but this appears to be a different issue - it isn’t showing as earned locally (offline).

The PS4 seems to know that something is wrong, though, because it tries to sync every time I open the trophies menu, and also tries to sync when I click through the notification.

Update: The trophy list is showing offline and on websites, but the game thinks I haven’t earned this trophy, despite the link sitting in my Notifications menu saying it’s unlocked.

Is there any way to get the game to recheck that the unlock condition has been satisfied and award it again?

I got credit by unlocking one level in the soul forge.

I have exactly the same problem.
Definitely, it’s a custom at 505. As soon as an Update comes out, a lot of bug appears! lol

Any updates on this before reset? I’m going to accidentally unlock the 10 curse gnomes trophy soon, and it would be good to know if it’s bugged.

Reports from global are that both new trophies are bugged. You get the popup notification but they don’t unlock, either locally or on the server.

I’ve never seen this behavior in any game, so there must be something really weird about how they’re configured.

Just jumping in to let everyone know I’ve shared this with the dev’s and they are hoping to get a fix for this Trophy issue out with the next client update.

EDIT: Following this up further, this may not be a client update issue. Awaiting some more information.

Looks like this has been fixed, at least for the soulforge trophy - I haven’t met the conditions for the other one yet. Thanks!