While grinding out the daily Boss Dungeon, I made a normal match that set off a combo including a Lycanthropy Gem and an Extra Turn, then immediately cast Banshee’s “Scream” against the sole remaining opponent (a King Mimic). During this process the Lycanthopy Gem was still floating its way across the board, and it seemed to disable King Mimic as a valid target, softlocking the game with no responsive UI elements at all (even the Menu icon in the corner is disabled).

Screenshot (I also have a video capture, if needed) 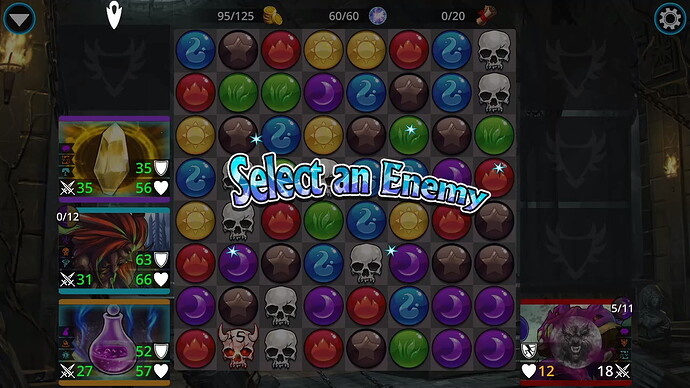 I can also confirm King Mimic WAS shown (very briefly) as a valid target before the Lycanthropy icon appeared on its card.

I had no recourse but to switch (no pun intended) to my Home screen and close the software manually. I typically play this game in handheld mode, using touchscreen controls.

This looks like something that could theoretically happen in any game mode assuming it can be replicated (my particular case involved a combo with new-gem RNG, but any 4- or 5- gem match involving a Lycanthropy Gem would make for an easier testcase).

I’m on Android and experienced this bug for the first time during the Tuesday delve event. I selected King Blood wood’s spell but it wouldn’t let me target and enemy. It greyed out the board and my allies like it would normally, but when I clicked any enemies, it’d only show their details. It wouldn’t cast the spell nor do anything else. I was stuck and had to retreat, losing that sigil… [Screenshot_20191105-215458] [Screenshot_20191105-215605] To clarify the screen shots, after you cast a …

Platform, device version and operating system: Steam GoW 4.9.5 Cast RoG [image] after selecting cast on Reflection of good, cannot select anything on the board, any enemy, settings menu, or chat. [image] [image] if i click on any of my own troops, like the weapon is intended for it only shows the troop info, but no other action occurs. [image] Game is stuck in this locked state, have to force quit

How often does this happen? When did it begin happening? first time ive s…

Platform, device version and operating system: PC, Steam Screenshot or image: [grafik] What you were expecting to happen, and what actually happened: I was expecting to be able to kill the last opponent with Zuul. Spell has been cast, the game just doesn’t allow me to select anything, no troops, no gems, nothing. It’s a soft lock, the game is still running animations. How often does this happen? When did it begin happening? Update 6.2. Steps to make it happen again Play fast enough? Thi…

It might be related to that last one because that also involves a combination of:

Notably, in my case King Mimic WAS highlighted as a valid target when I initiated the spellcasting, but became disabled upon contact with the Lycanthropy Gem, creating the softlock. Which all happened during an interval of about 0.2 seconds so it’s very good I caught it on video: