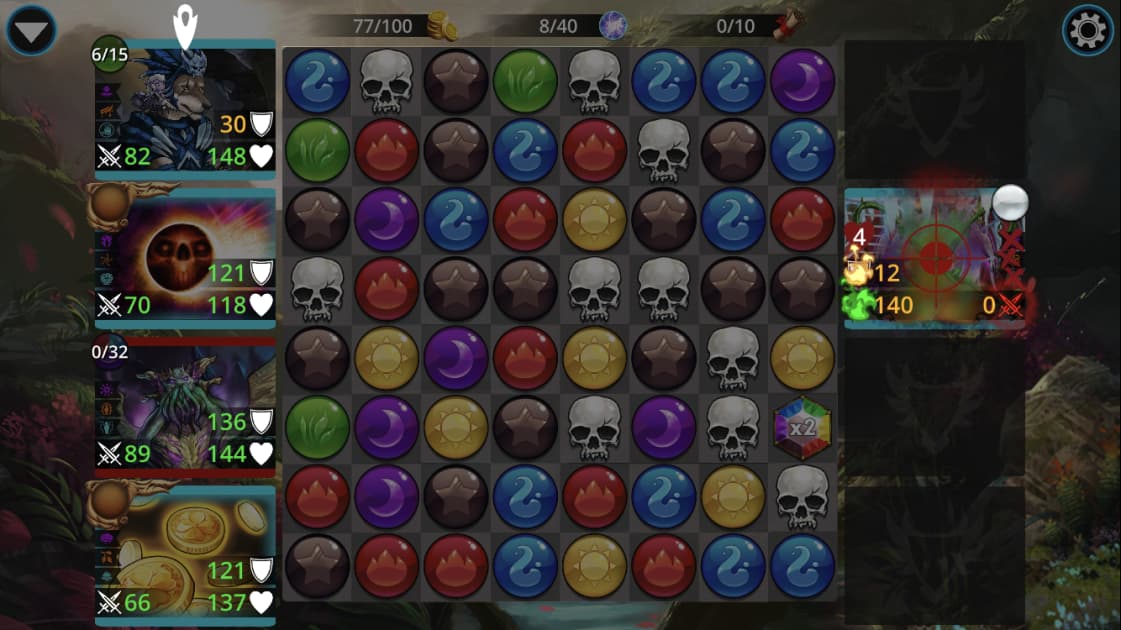 What you were expecting to happen, and what actually happened:
Explore 12 Mythic battle, one enemy troop left. My Zuul was charged, and I expected the last enemy to die in a most horrible manner. What actually happened: The enemy somehow made itself untargetable/stealthy for Zuul, making the game “stuck”, because there were no other enemy left to target instead. Still animation movement, but nothing I could Zuul (or get out of Zuuling-mode), so had to restart.

How often does this happen? When did it begin happening?
Never seen it before, first time here a few minutes ago.

Steps to make it happen again
No clue, never seen it before. Rather not want to see it again.

Very weird, even if it has stealthy trait, is stunned and last enemy. which troop it was?

Were there any special gems (Lycanthropy, Curse, etc.) on the board and did one of them start triggering right as you attempted to have Zuul spellcast?

There is a bug where gems that “float” across the board when triggered can softlock the game if you attempt to cast a manual-target spell at the same time, regardless of whether alternative targets are available.

Compare these prior topics:

I can’t remember, but I was raiding Bright Forest, so a troop from that Kingdom.

I am 99% sure there were only basic gems and the Wildcard ones Centuragon creates - but maybe the EoE weapon has a similar effect? I’m pretty sure I cast EoE on that troop earlier in the match.

Edit: Ah, I see what you mean with the floating Lycan-head (from your screenshots with the Mimic); nope, did not have that. It was my turn, I did nothing but pick Zuul. Was playing on max speed though, but had no other actions going on.

I’ve grabbed this one and the links to the other threads we may have missed recently & updated the report for this issue!

If anyone else happens to catch this on a video that would be amazing, so we can share a recent instance of this occurring but there are some good screenshots about that I have added to my report in the meantime.

I had a similar hang-on bug recentiuwith some other targetable ability, but it wasnt about the hiding at all - enemy cards were unclickable right away, with no ‘stealthy’ effect. I Didn’t pay attention too much.

I play on Switch which doesn’t have access to “wildcard” gems yet (but video capture is SUPER easy), how do they work (visually)?

I suppose like regular gems, just of any color? I don’t think there’s much extra animation - they glow up a little when matched, but that’s it.