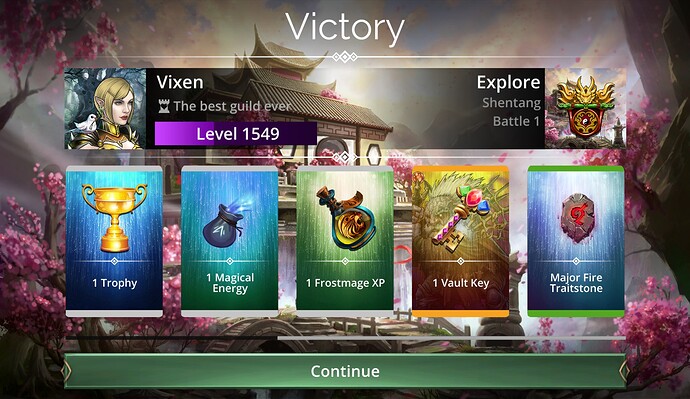 What you were expecting to happen, and what actually happened:
I used a cursed gnome bait, expecting to get an encounter and receive cursed runes, but got a vault key instead.

How often does this happen? When did it begin happening?
20 minutes ago. Only had 1 bait.

Steps to make it happen again
Repeat process. Explore 1 in Shentang.
Did submit a ticket, so we’ll see what they say.

This was supposedly fixed not too long after Cursed Gnomes were released and was fine for multiple Vault Events. Looks like this is another case of a fix being broken again after a later update. I swear there seems to be no version control going on when hotfixes/patches are done. It’s like they go into some different dimension and are totally forgotten the next time a major update or similar event rolls around.

Think about what you are saying. During vault event weekends. You are saying it is the intention of your coworkers to have a rare resource like cursed runes be less obtainable the more often the cursed gnome can be found. And are okay with frustrating players with a

instead of the runes they thought they would be getting?

Who is sabotaging this game with these kind of ideas? Honestly.

What you were expecting to happen, and what actually happened:
I used a cursed gnome bait, expecting to get an encounter and receive cursed runes, but got a vault key instead.

If you purchased the bait then you have grounds for a refund or a lawsuit since you paid something and was given a vault key worth a $1 according to the devs.

I purchased it with gems in the legends reborn (did it for the pet/cursed gnome bait and pet). We were previously told that they would no longer drop vault keys. I feel ripped off.

When did this change from not being able to drop vault keys ever? I wouldn’t have purchased it if I knew it changed (or would have used it before the event).

@Kafka I remember this was fixed a while back. Now they can drop keys again?

We are putting in a change so prevent this from applying to the Cursed Gnome in future Vault Events.

Oof, I am following up on this thank you @noob

This most certainly is a bug, following the quote @noob has kindly provided.

If things truly were changed (making this not an attempt to brush the team messing up under not-a-bug-carpet), it raises two questions:

Why were Cursed gnomes changed given their extreme rarity even with vault event active? (For example, I encountered a grand total of 0 Cursed gnomes over the course of 1216 non-palooza games this weekend.)
Why did nobody bother to inform players about such an important change?

I’ve brought up the fact we said we’d be making a change to effect Cursed Gnomes specifically which requires a bit of a rework of the Vault event.

I’ll post here when I have more information. It may not be today as we’re prioritising the asset downloads, red map flash and missing buttons when playing in 4:3 ratios and on tablets issues first.

With the GaP Gnomes I’m assuming they were made to be excluded for that reward table during Vault events too - but I’m checking with the team.

Because we did fix it for the Cursed Gnome, and for whatever reason the fix was reverted unintentionally. Not sure how that happened yet as it’s only been an hour since I reported it to the team.

Just why is it so often the same pattern?
Quickshot answer (just to show some form of “activity”?) without seemingly really checking up on things and instead just denying everything at first, then write some false infos down trying to discard the (most likely existing) bug like “nonono, nothing wrong”.

This is so disrespectful. And sure, it is always possible to say “Sorry my bad” afterwards but this eventually loses its entire weight through time if you seemingly don’t care and it’s just used inflationary. How dare players then also find some old comments which were written/announced otherwise in the past by the same (official) person…

I’m not trying to kill anyone’s mood here. Just maybe think about it whenever someone posts a “bug report”. Why would someone go through the trouble of posting something in the forum, maybe having to create an account even, about possibly a few cursed runes? Do you think it is worth the trouble to lie about something like this and eventually get exposed?
If there’s clearly nothing wrong or some brainlag occured the players itself most likely would be quick enough to correct / educate each other. There’s plenty helpful people around here. Do devs think players just purely imagine things or lie?

I asked the people who designed these features, they know the game overall better than anyone and that was the answer I received. The fact is we are all only human, there are a lot of minute details to this game and we can’t keep it all in our heads all the time, sometimes, something is going to slip someone’s mind. When that happens and we realise we will correct what we said and own our mistake.

As a group the community DO know the game better than the designers of the game, because 2 heads are better than one (and there’s more people participating here in the forum than actually work on the game. So if I ask 1 person 50 questions a day and they misremember one detail - that’s life. I don’t feel good about responding incorrectly, they don’t feel good, but it happens. I’m sure everyone here has at some point told someone the wrong answer about something that person thought they knew more about.

I was pretty happy with the sincerity and promptness of the acknowledgement of error and follow up information, actually, even if the initial response was incorrect.

The only thing I can think of to potentially smooth out the initial response would be something like, “Could you point me to where this was fixed/stated so that I can follow up?” and maybe removing the uppercase emphasis for “CAN”.

Ideally if not sure about something one would add, “I believe…” or “To my understanding…”, but that then falls into unknown-unknowns that can’t be expected to be considered if you think you have the right information but are in fact mistaken. ¯⁠\⁠_⁠(⁠ツ⁠)⁠_⁠/⁠¯

Maybe I’m just feeling relaxed about it all since I’ve dropped down to a very low requirement guild though, too