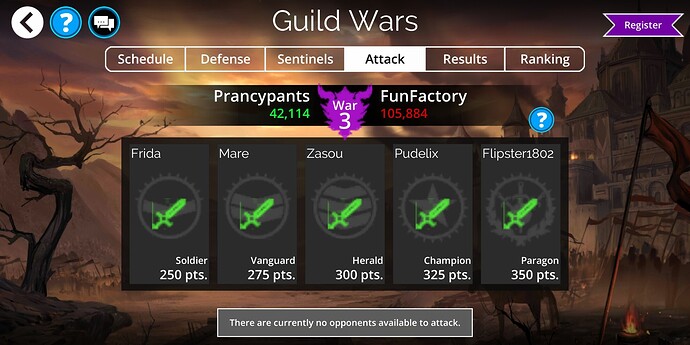 What you were expecting to happen, and what actually happened:
The green sword is blurry. That sword inage also has a green border to its left and top.

How often does this happen? When did it begin happening?
Good question. I just noticed today. I have recorded some past GW fights so I went back to look. Dec 20 GW day was fine. Yesterday, Jan 13, was not.

Steps to make it happen again
Win at least one GW fight. Go to the Attack screen. Broken sword icon will show.

I also tried restarting thr game but no change.

Confirming that this is also happening for me on Android.

Are you able to adjust the image quality under settings?

Aren’t you supposed to see the avatars of your opponents in those grey boxes?

Edit: looked up some youtube videos, the avatar shows only for the next opponent in line, so that’s ok. I can also confirm that AWR’s suggestion works, adjusting the Graphics Quality to Medium/High “fixes” the green sword.

Thsnks! Graphics quality was set to low. Putting it to medium fixes this glitch.

Pretty sure it was always low though and this used to work. This game kills my battery (yay mobile) so I kept the graphics down. Other than this glitch, I actually dont see any difference between the graphics settings. I assume its more obvious on a big screen when playing PC or console.

Has anyone on other platforms experienced this? We’ve had a run of graphic issues on Android so it wouldn’t surprise me if it’s just there.

Eh. Just because there is a bug report doesn’t mean it needs to be addressed. However this may be just one side effect of a larger issue, so it is still useful to know.

It looks just like that on iOS. Graphical artifact on “Low” setting, but no such border on “Medium”. Has done for years—I feel like I brought it up a while ago, but since it is purely cosmetic I get that it’s never been a priority.

@Saltypatra, checked with my guild and this is also affecting someone on iPad. Will edit my post to include that.

@Saltypatra It looks like graphic quality does not affect the pictures on PC, grabbed this on low quality, blur off.