and dissuade existing players from investing anymore money into the game.

Nicely said this is exactly me

But now since it’s a P2W maybe we will see the gems prices drops?

Do we know if the troops accompanying Zuul’Goth will be Karakoth troops every event? Or will they rotate? I wouldn’t mind not seeing Tzathoth for a while.

I’m really not sure. It sort-of makes sense that the minions bursting through the portal would be the same every time (just to be consistent lore-wise), but it will make a mode that felt stale after 3 days even more of a drudge-fest.

I wonder if rewards will be the same then raid boss and invasion, not sure if there is a leaderboard or if it’s only individual milestone rewards

I see it as being the about same. Only difference is it’s solo not guild. Just a guess based on previous 2 events. I think this one is any team you want to use. Still will have gem sink p2w mechanics.

Yup unless the rewards are so awesome, im only going to buy tier 2 for the troop then do what i can do with what i got.

It should be a lot easier to decide what this event is worth to us, since we won’t have to balance guild contributions against personal rewards. I’m curious to see how this is going to work - hopefully the preview thread pops up soon…

If this event is special enough to only be 3 days a month, then I’m hoping the personal rewards aren’t disappointing. Basically, already setting myself up for disappointment.

Edit: Because, I can’t imagine a week where Raid or Invasion AND Bounty mode is going to end well if Bounty is underwhelming.

Look interesting but the need of sigils really distubing me. I know they don’t like to use the term P2W but we now got 6 modes and 3 of them are P2W, this is 50% of the content, i am really worried about the future of the game…

Is there certainty around sigils for Bounty or is that still just speculation?

The 3.3 patch notes certainly made it sound like it would work the same way as Invasions and Raids which, in my mind, would equal sigils. I can’t remember if there were distinct sigils for raids and invasions, though - in weeks where there is a bounty on top of a Raid, things could get confusing.

Actually, now that I re-read the patch notes, I’m not sure about the sigil mechanic. It might be more like the kingdom challenges where you can play the battles in increasing difficulty with significant rewards when you complete each level for the first time, but other levels replayable (probably for lesser rewards) if you want. You get scored for performance somehow.

The Valraven functions much like a Gnome, but only has a chance to appear in Raid Boss, Invasion, and Bounty events

@Alpheon Would you mind specifying the damage needed to close each portal of the Raid Boss event. There’s little information about that on any guide. Number of portals keep changing too. I remember @Kafka’s guide on this says 20 portals and since hasn’t been updated.

Hi @jpraveensn, the damage required to close each portal is displayed in the Rewards tab of the event.

Well…this makes my question incomplete. We have finished the event, and now there’s no way to go back and check it. Is there?

Anyway, here’s a table showing points needed to close Raid Boss event. Damage to be inflicted to Zuul to close all 10 (as of now) portals: 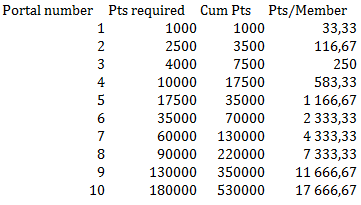 Shown in the fourth column is the average damage to be inflicted by each player in a 30-player guild to close the event. Third column is the cumulative one.

Oh sorry, I see. The points required and cumulative points you have there look about right.