PVP system is perfect and heres why

Just kidding, it’s horrible. Just like everyone has already mentioned before the PVP system is broken. The scoring is ridiculous but now I’m seeing another problem. Since the update I can end up play the same 1 or 2 teams almost 5 or 6 times in 20 or 30 matches. With the thousands of players playing I find it crazy that I’d be playing the same teams over and over again at that rate. This has occured in multiple sessions over multiple days. I dont expect this to get fixed since the devs are just ignoring all the posts about PVP, but I figured I’d add to the outrage machine.

Oh and seriously, can we get 4x speed when in the pause menu or when you click the troop before the opponents turn is over? How has this not been fixed since 4x speed became a thing, and also how is no one else complaining about that this lol?

I also did notice I get the same battles over and over again. This started to occur after they "fixed’ it so we wouldn’t see 4x Fire Bomb teams.

I wish they would revert it back to how it was so I can get the PVP part done quickly on Mondays.

It’s actually on par with what they’re trying to do. Time = you’re better, gems = more times, and gems = money.

If they take the time out of pvp, then what do they do with everything else? Skill base it?

You don’t get better rewards for any warlord 4 fight for anything in the game. It’s a terrible loop started with terrible game design that can only lead to more terriblesness.

It’s unfortunate but it’s where we’re at.

I honestly like pvp the way it is. I still get to tire 1 easy. Also they are reworking PVP in a future update

I’m guessing you are not an endgame who is consistently getting 35-45 pvp points per battle.

Thats hard to believe. Most end gamers i know are lucky to get 50pts on a 3 trophy battle. My alt account is level 650 and hes not even getting the 70 points per battle anymore. More like 55-60

I’ll do a battle real quick then give a ss 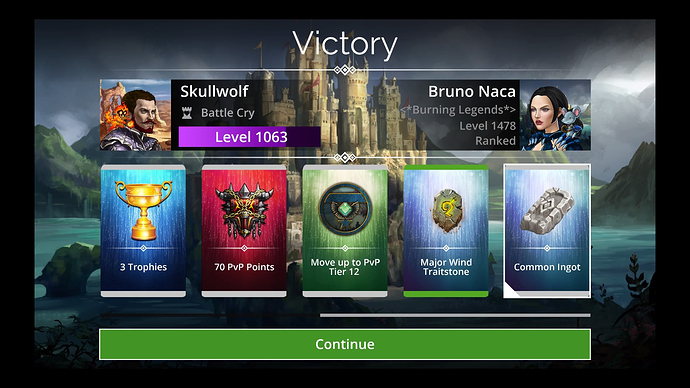 That kind of proves everyones complaint then. Things should be equal. One person getting 70, and another 35 to 40 on average seems like something is not right in the game.

yes it direct!y has to do with statues and if your guild does all tasks each week

yes it direct!y has to do with statues and if your guild does all tasks each week

This is partially correct but it also takes the level difference between you and your opponent. My guild has all tasks completed

That screenshot actually proves you are not at the true endgame level yet. I assume you don’t have any kingdoms to power lvl 10(or all to 5 for that matter) and no delve skill points. You also dont have the 3 or 4 extra skill points from being 1400k lvl plus. So my suggestion to you is don’t lvl your kingdoms any further if you wish you keep those pvp points.

It was never to be able to play more diversity teams, it’s just what they said to hide the fact they were limiting high level players & penalizing them for points & gold. That’s the skinny of it right there.

I have all kingdoms to level 10 and delve points