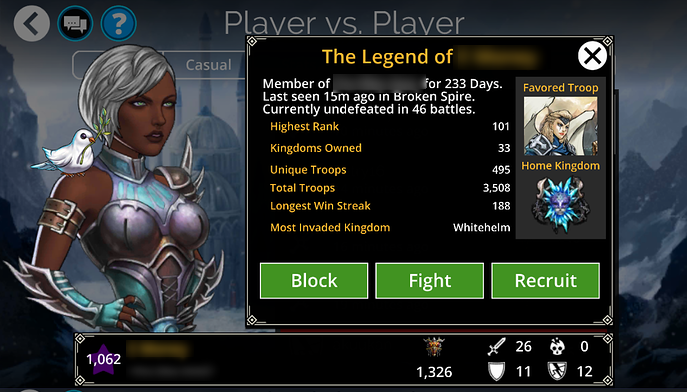 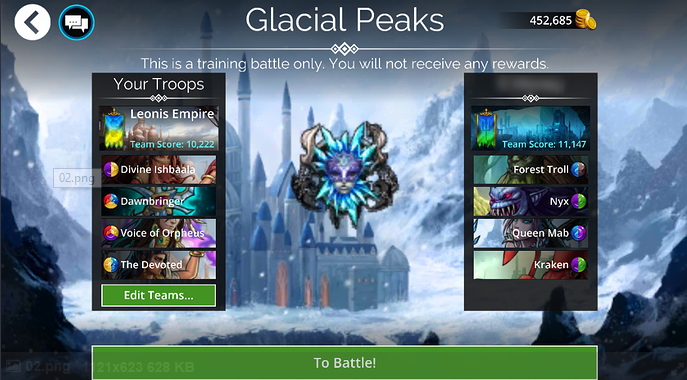 Explain how a lower level person has more power than me plus I have all mythic troops.
1158 is my level there level was 1062.

I’m not sure if this counts as a call out, so you might want to tread lightly…

What do you mean as a call out. I’m just trying to understand the game.

“Call out” is exposing a player to be “named and shamed”, something that is not interesting specially if you SUSPECT the said player is a cheater. So it’s advised that you should censor the name of other players when you post, even if you are no accusing anyone of anything. And when you find something SUSPICIOUS you should report it to the Game Support page, not simply post it here on the forums.

Anyway, while your thread is not about naming and shaming anyone i believe you’ll be fine, as in not receive any warning or other punishment for it, but as i said i think you should edit/censor/cover the nickname of the other player.

On the strange power level i think it might be a bug, maybe just a visual one, or something else. No one is sure about it so far i believe.

You get redirect to forum because there is no support for the game. So if you can’t support this is the next best thing.

I don’t know how to delete the post yet but when I get it I will remove it.

I believe @Lyya or @Ozball could edit your images without the need to delete your thread. I wasn’t aware, or forgot, they have no support site anymore. But i found this:

While the team does keep a close eye on our Support forum, sometimes your question might have already been answered on our official support site. If you can’t find an answer for your issue here, on our official support site, or you problem is directly related to your Gems of War account, send us a support request and we’ll get back to you ASAP! Please make sure you fill out the support request form to the best of your knowledge, as the more information we have, the quicker we can resolve your …

I can make this edit, but to be clear, speaking for myself, I don’t feel there was malicious intent here and I wouldn’t consider this a callout.

I agree, but always playing on the safe side of the rules.

Thanks everyone. I know for the future how to post. I didn’t think it was going to turn into this. But everyone starts somewhere. I have never done forums. So this is all new to me.

It appears that the defense team score calc was altered starting this patch. Before, it incorrectly used the old Adobe formula for defense team score calculation instead of Unity (usually giving the defense team about 1000 less points at endgame). Now it uses… I’m not sure what formula. Its not Unity, and its not Adobe. If I had to guess, its an aggregate of both - it now gives points for both having five star kingdoms and for having the guild bonuses. The difference would be 980 points between defense teams and the teams everywhere else (160 points for every completed task for unlocked skill bonuses but red, which gives 180). Sure enough: 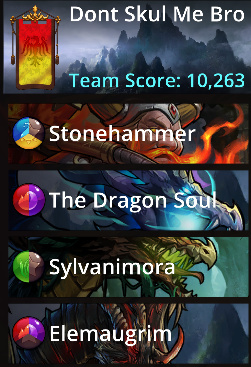 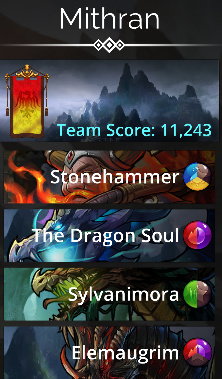 Remember that the gold you get is based on your opponents score compared to your global score modifier, and team scores affect where they’ll appear in your matchmaking. I’m seeing a significant increase in the average gold per battle and way more appropriate matchmaking (much fewer teams that I can sunbird/firebomb) post patch.

Don’t worry, if anything always ask and someone will probably help in the best way they can.

So why is there a big difference in the power when it’s the same team?

Team power is based on level and stats, which are affected by a lot of things. Most importantly, team power’s algorithm is not documented, which means it’s impossible to know what “correct” looks like.

Since it’s stat-based, they may even have a different score with the same team and player level. Why? Well, stats can be affected by:

You can’t see those things, but you can see their troop stats. If their troop stats are higher than your equivalent troop’s stats, there you go. Since it’s stat-based, I really think you have to compare the teams to each other to see what’s going on.

I repeat though, it’s a black box. It could be working as designed, or it could be completely broken. As players, we don’t have the tools to know. All we can do is post a screenshot of every player’s teams and ask the devs to manually check each one for us.

So why is there a big difference in the power when it’s the same team?

Your screenshot is not comparing the same teams.

I was asking about your post you just posted showing the same team but different powers. So meaning I’m going to have to trait more troops up to get more power it seems.

As for the “why did they do it like this?”, I’m not really sure, but its probably a mistake. The score calcs used on defense now are the “correct” formula that have been “incorrect” for years, and the one on invade is still “incorrect”. But the end result is better gold spreads and less instances of matchmaking versus completely trivial teams (which some might see as bad, but IMO is a better long-term experience). If they “fix” our invade team scores to be correct like they did defense, we will likely go back to a state where we have semi-broken gold calcs and matchmaking at endgame, so I’m not exactly clamoring for this to be “fixed”.

Team power is based on level and stats

It is a common misconception that stats affect kingdom power. Some things that add stats also happen to add kingdom power - and thats it. Pet bonuses, team bonuses in general, and weekly event bonuses affect stats but not team power. Leveling kingdoms to 10 affect score, five star kingdoms do (now) and completed guild tasks do (now). One instance I personally tested when I was parsing out how scores work post Unity was having a five star kingdom at not level 10. This five star kingdom would add 40 points to your team scores, but not raise your skill bonus at all.

Another common misconception is that masteries contribute - they don’t. Hero level does, and guild statues do (up to exactly 500 points total) but any other mastery source does not.

I did a bigger post on this somewhere, but basically every single point for a team’s score can be accounted for. It is more difficult when looking an enemy team, since you have to extrapolate for missing variables, but it still usually can be done. Hero level is the only score modifier that isn’t completely linear, you get less points per level as you have more levels, but that also means that post-1000, the score differences from hero level are relatively minor. Because only a few things actually affect the scores, when defense and invade teams use the same formula, most endgame players are going to very similar scores with only a few point divergences. It just hasn’t been this way for a while because its been broken for a long, long time.

Your screenshot is not comparing the same teams.

Mine was, heres the whole thing to make it clearer: 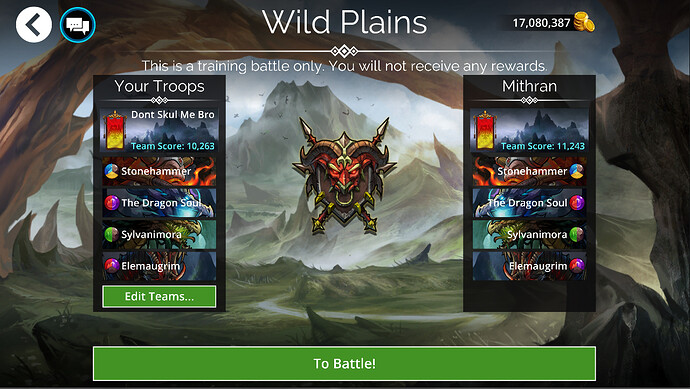 The exactly 980 point divergence is explained by the invade team not getting credit for Guild Task completion (and they havent since we’ve been playing on Unity) while the defense team does (prior to this patch they did get the guild task bonuses didn’t consider five star kingdoms for score calc, which is 1320 points at endgame, which is why the huge sudden jump in what we are used to).

Oh. Got it! It’d still be nice if I could like, look up the team score calculation information in an FAQ instead of having to post a bad explanation on the forums and wait for someone to correct me.

The reasons given about kingdoms, pets, guild etc are not true as all mine is pretty much maxed (guild Intrim).

I agree with you something must be fishy with it. I have went through all my kingdoms and traited all the troops that I could and still my numbers have not increased.

There have been for a long time now, but they changed defense formulas again last patch and they still aren’t in sync. (see my above posts)