Please make traitstones random for PVP instead of kingdom based

So until the most recent patch on the consoles, traitstones earned through pvp were completely random.

Since the patch, traitstones appear to be coming from whatever your opponents home kingdom is (which i believe matches the mobile)

Unfortunately for the vast majority of PVPers, this means their home kingdom is Whitehelm. That means pvp battles are going to be worth a wind traitstone 90% of the time and that’s painful.

I would MUCH rather have it be completely random (as the console was), than 90% one particular trait stone. That or tie it to YOUR home kingdom as opposed to an opponents home kingdom, that would at least allow players to target certain ones at the cost of glory.

@Sirrian
I don’t suppose there is any chance you guys have considered the console versions traitstone system which is just a random grab bag, as opposed to home kingdom based?

id like it on the pc/mobile as well. or make it opponents team banner/flag based instead, anything else/more variety then the home kingdom

Yeah this was a cry for help for the console players and a change that I assume most mobile players would prefer.

Please make this happen for PC!!!

So we try try again

Indeed. Given that consoles have now got PC/mobile’s Whitehelm-focus (rather than us getting console’s random one), it’s definitely worth pointing out that now both groups are unhappy.

I don’t suppose there is any chance you guys have considered the console versions traitstone system which is just a random grab bag, as opposed to home kingdom based?

We might consider this. No promises or ETA if we do decide to change it.

(Its because of Whitehelm.)

I’ve stated this many times, but what they really need is to have their home kingdom revenge system back. Pure home kingdom targeting would also work. Random is one step down in terrible from the system they have in place now, because at least you’d see a handful of minors and maybe a couple runics of each type per week, but it does nothing to address arcanes, where they would then be a 1/1050 chance for a specific one, resulting in months of PvP battles for a single arcane of a given type for most people. When the old home kingdom revenge system was in place, you not only had about a one third influence, but trends toward popular troops and stones would automatically correct in the economy as other people set their kingdoms to them, which resulted in better overall coverage of the stuff everyone was missing (eg., minor reds).

Months and months ago there was an enormous thread about increasing variety in Defend teams. Specifically in that thread there was a discussion related to associating the weekly event into some type of bonus if your home kingdom was set to it to encourage some variety (carrot) without forcing players. This was also to help change up the troop defend “meta” week to week by offering a limited time event bonus as well.

I’m certain I had a reply from Sirrian, but now it looks like its too old to locate.

It seems very quite, but 2017 this problem is still reality!

Here is the proof: 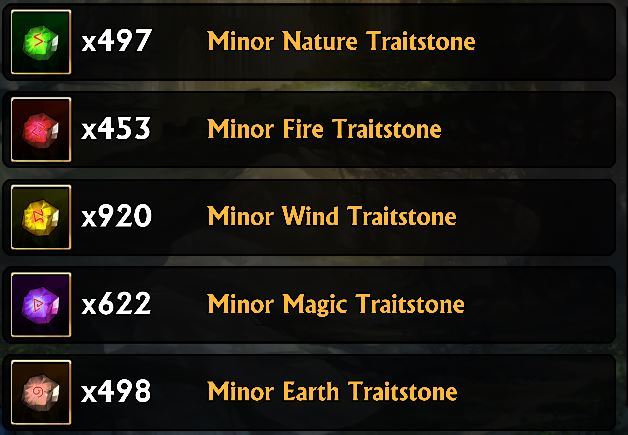 PLEASE make the traitstone reward random - i cant see all the Whitehelm Homies anymore!
I bet all of the high level players have mostly Yellow Minor, Major, Runic and Arcane Traitstones like me…

Um, yeah, 100% still a thing. Plenty of people have come to their senses and moved off Whitehelm but the giant stockpile remains. Not to mention most are still sitting on the same kingdom anyway.

This is primarily not a Whitehelm problem, but a troop problem: too many troops need minor reds and not enough need minor yellows. However, the problem is magnified on PC/Mobile by the fact that you get way too many yellows in PVP.

I just tried to find the post, but there was a time a few months ago where I just counted… and it was something like only 20-30% of Red/Yellow and Blue/Yellow troops were Yellow-primary, as in needing Minor Air.

Yes. I made a concerted effort to use up a bunch of my yellows, and this was the result of that. I only have 200 more minor yellows than any other colour. Silverglade helps to correct that a little bit (2/3 troops that use yellow there are yellow-primary). I haven’t checked any of the unreleased kingdoms to see if that is a fluke or not…

Its both. Yellow is the least needed total, and red is the most needed total. But we also get a lot more yellows than any other color. This total need gap is being slowly closed by troop releases, but it is still there. But the Whitehelm gap is a bit more severe than you may realize.

At present, on PC/Mobile, we need about 3400 red minors to trait everything, and 2800 yellow minors to trait everything from the start. However, looking at my color totals, I currently have 450 more red minors than I need, but I have 2800 yellow minors more than I need. Thats a total of 3800 minor red obtained over the course of the game versus 5600 minor yellow obtained. Quite a bit more. And this is coming from a less than 200 PvP battles per week player, and I get most my minors through gold keys at this point. Not to mention all that is after farming about 100 red/purple arcanes in explore over the course of several months while having never done any extended exploring on a yellow primary kingdom (I believe I needed 6 arcane blades in total).

The Whitehelm problem is very real.

I think my totals are closer at something like 4900 Red vs 6100 Yellow. Point stands though.

The Whitehelm problem is very real.