Outstanding Work at the end of Campaign 3 Devs, I mean really

How many weapons could be selected this week that are involved with the campaign but not option for the world event?
Because I know of at least one.

Others have complained before where the Campaign wanted us to use Goblins but the event was Elementals so this isn’t an isolated occurrence.

It honestly feels like I’m just playing a random seed version of Gems of War. No one can actually be over looking this shit prior to release. And if there is… Then clearly they don’t know what the hell they are doing.

Your game keeps trying to encourage players to be the opposite of efficient. And I feel that’s a personal attack on my values.

That plus the super duper gated silver tasks. Three days then two days. Sheesh. Its like they flipped a whole bunch more coins than usual when randomizing the hell out of how bad this event would be.

I mean really, this is all planned. I hate to sound like a conspiracy theorist, but c’mon man.

I deleted my post in the stream thread, but that is pretty convenient timing that the training battles get glitched, don’t you think? They’re probably all sitting around like a California school board, laughing at all the dumb GoW players that spend money on campaign tasks. “If you gonna come at me chunky, I’m a f u up, I’m sorry, that’s how I roll…o wait, are we live?”

C’mon man. “We can’t fix Doomed Blade and Club because the code is too complex”. How complex was the code to nerf Skeleton Key. But they changed that.

They laughing at us. I know it, and in your heart of hearts (heart of rage, anyone?), you know it too. They efficient in their inefficiency. Real efficiency costs money.

That plus the super duper gated silver tasks. Three days then two days. Sheesh. Its like they flipped a whole bunch more coins than usual when randomizing the hell out of how bad this event would be.

I asked Salty in stream once about the time gated tasks. She admitted it’s a way to encourage daily gameplay.

I mean really, this is all planned.

Basic freakin’ psychology here. We like being offered things on a daily basis for playing daily. We do not like being punished for not playing daily, or being arbitrarily delayed JUST to force us to play daily.

That weapon task surprised me as well. Till now the weapon type was always tied to the class of the week.
Shield for stormcaller WTF?
Silver tasks takes 4 days to complete, what a joke!

Maybe this will finally be the catalyst of why WEAPONS SHOULD NEVER be restricted in ANY event.

It’s seriously the biggest factor in making these events fun or complete drags.

They should try to encourage folks to buy the campaign but when they keep doing the 2-4 days to complete a week it discourages folks from buying it. I know they do it to get folks to spend their gems but gems don’t keep the lights on. People will still spend gems to avoid tasks they hate. If one person says no to the campaign because of the 2-4 day nonsense then it’s a bad business decision. Some folks might buy the campaign at week 9 or 10 if they had a snowballs chance in Hell of completing it.

They should try to encourage folks to buy the campaign

They do, but it’s more by telling you what you’ll miss out on if you don’t and making the free campaign rewards hot garbage. Though, I’m sure the mythic troop is a decision-maker for some, too.

Which is why people buy the pa$$. “$10 mythic” = temporary amnesia regarding legitimate issues with the game because it’s too good a deal to pass up.

If there really is a full team still working on this game I would be embarrassed if I were IP2. The eye and smell test says it was handed over to an unpaid intern team at the release of 4.7

Sadly I totally agree. It shows. Either mind boggling ineptitude, or just nobody there to keep the lights on anymore.

Here to say what @Snooj did. There is a list of possible Campaign tasks, and RNG selects tasks from that list. I have passed the feedback onto the team, and they are looking into it for the future. When I know more I will post again.

Unfortunately RNG doesn’t know that Suncrest doesn’t have any weapons that are Shield types.

So perhaps if your “RNG” is able to pick from any weapon task during World Event weeks. Then perhaps the logical thing would be to allow your players to pick any weapon as well.

Yet it was allowed to pick use a Shield Weapon Gold Task despite Suncrest not having a Shield Weapon.
In my opinion that’s more shameful than the Adventure Board and Dungeon Silver task landing the same week. Because the gold task is just lazy coding.

@Saltypatra but let’s make this blunder into a blessing and just remove weapon restrictions from world events all together.

Ok, so I’m out of the loop. Why is it mandatory for a weapon task to be available in a world event? I don’t see how they have to be connected.

Last time I remember you had words about new crafted weapons not being available for the world event, and I didn’t see how that was mandatory to be connected either…

Ok, so I’m out of the loop. Why is it mandatory for a weapon task to be available in a world event? I don’t see how they have to be connected.

Because the Event should be an extension of the campaign. Or fine. Leave the World Event aspect out of it. And just make it tied to Suncrest like the rest of the tasks were this week. On just a purely narrative sense, you have a task tied to Suncrest as a Chapter, that wants you to use a weapon, that can’t be found in the kingdom of Suncrest.

Last time I remember you had words about new crafted weapons not being available for the world event, and I didn’t see how that was mandatory to be connected either…

You’ll have to remind me about specifics. Because I think the last time I had an issue like this was during Campaign 1 and it had to do with colors. But at least the weapon type was available. Just couldn’t use the preferred weapon. In this present Campaign 3 Week 10 case not a single weapon exists as an option to use to complete the gold task while doing the World Event. That’s bad design imo.

Whether it’s an issue to you or not. My overall point is weapon restrictions shouldn’t exist in World Events. It’s easy for end gamers to brush it off. But for new players and mid gamers it’s a huge hurdle that causes world events to be way more a pain than enjoyment. On top of EVERYTHING they have to do in hopes of catching up with the end game.

And yes… New players probably shouldn’t be doing World events or Campaigns for that matter. But hard to steer them off of it when everything in the game now is pointing them in those directions.

I just used Shield of Urskaya in a delve. Task done in a jiffy.

I just used Shield of Urskaya in a delve. Task done in a jiffy.

3 separate Delves since the task required 22 battles. Regardless of if it took the player a jiffy, a jaffy, or a juffy.

A little effort from the designers of the game, is not too much to ask for from those who financially support the game. And since the “free to play” formula clearly works for GoW. The purely free to play players are entitled to their opinions as well since the game wouldn’t exist without their support as well. Even if that support (in the form of time or word of mouth) comes with an occasional complaint.

@Jeto can you please explain why the campaign bot ignores the kingdoms weapon availability when selecting weapon type? (Ideally these tasks should be able to completed in the World Event, you know, the Silverglade World Event.)
Not selected by RNG decided by the least amount weapon type used in the game the week prior.

It doesn’t make any sense.

And though there are some who like to think that the Event Kingdom doesn’t have to correlate with the Campaign Tasks. I direct you to the top of the SS. And how every other task this week is related to Silverglade. 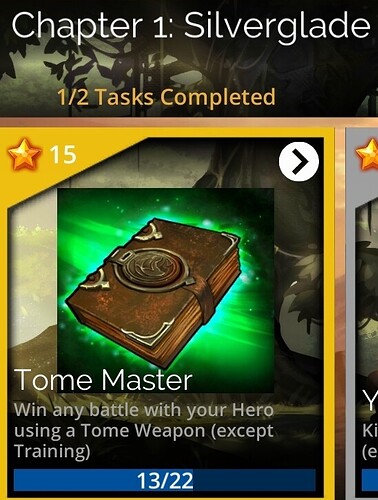 Just reroll as I did and you might get tons of pvp fights as I did, then just pay the 100 gems out of frustration like I did to skip it right before remembering I was saving them for the Weekend FA