[Not a Bug] Missing rewards on purchase of the Tier V 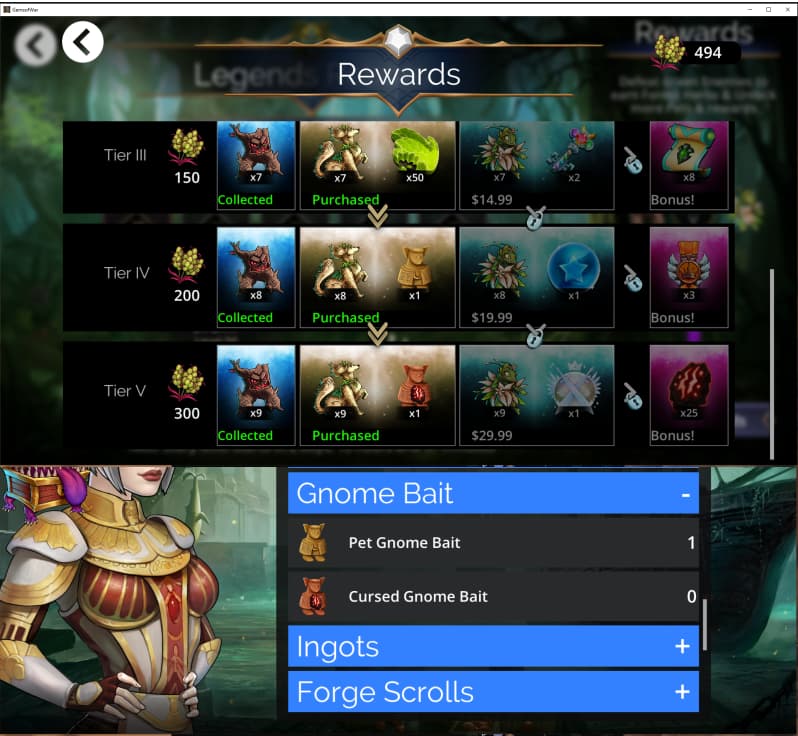 I bought the Tier V gem reward and didn’t get a curse gnome bait for my troubles.

Is there a fix or something thing. Otherwise can I get a refund on that, farming for curse gnomes is a pain and not likely to get enough cursed runes to do anything anytime soon. And no I did not spend it to make this up.

You may have played a pvp match (mybe it would even work in a explore match?) after purchase with a cursed gnome in it automatically triggered.
Else I’m missing the x1 cursed gnome bait, too. But during the day I “found” 1 cursed gnome. If it was triggered due to the reason I wrote above I can’t tell tbh

I avoid pvp like the plauge, it is unlikely I used it.

The description says pvp only, no explorer.

I used mine in explore, it 100% does activate in an explore battle.

I bought the pet bait and gnome bait and both worked.

I checked in your logs and I can see you did receive the Cursed Gnome bait from this purchase, but then it was used in an Explore battle you played shortly after.

Cursed Gnome Bait is consumed in either PvP or Explore, whereas regular Gnome Bait is just PvP.
But I’ve told the team that the description in the Inventory screen is currently the same text as the Pet Gnome Bait. This will be changed in the next update.

In answering another question about pet baits, I was re-reading your explanation. Did you mean that Pet Gnome bait is only consumed in PvP? (I don’t think it’s supposed to be Explore, unless there is there a third Gnome bait I’m unaware of?)

Apologies, I had written Expore for Gnome Bait when I meant PvP!