[NOT A BUG] Delves aren't a training a battle

Campaign Task is misleading since I think pvp glory is the only way to actually unlock it.
With today being a Faction Assault I decided to test earning Glory from delves. Actual glory, not delve glory.
Here’s the task.

Now if this is working as intended and glory has to be earned from an individual battle then please change it to a feature request to allow alternative ways to unlock the glory Campaign tasks. I hate doing ranked PvP anymore and casual PvP is dead to me now.

@awryan I can confirm from last week that the glory earned from delves did not count toward the task, both from individual matches that give the bonus rewards and like what you have here with the chest reward.

Ranked/Casual PvP were the only things that allowed the task to complete. I am not saying this isn’t a bug, but it isn’t a one off either so it very well could be working as programmed. 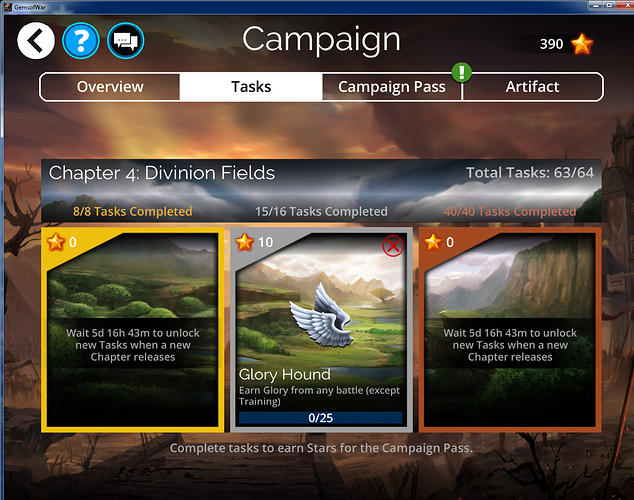 This task needs to be renamed “Earn Glory From PVP” to be accurate.

You need to earn “Glory” in battle. Delve battles don’t apply, they award “Delve Room Glory”. Activities based on collecting rewards (like Delve chests and Arena runs) also don’t apply, “Glory” must be earned from battles. “Glory” dropping from a Battlecrasher or Glory Gnome possibly qualifies.

If Delve battles don’t apply, it should’nt say “any” battle in the description.

If Delve battles don’t apply, it should’nt say “any” battle in the description.

Delve battles apply, if you ever were to get “Glory” from those battles the task would progress. It’s really future-proofing, they might add extra ways to earn Glory in future (e.g. a variant of Merchant’s Blade).

They clearly DON’T apply. Maybe if in the future they change it so it does, then it can say “any” battle.
Until then it’s WRONG. Period.

By collecting your reward from the delve chest you do not do a battle but opening a chest.

They do apply or you couldn’t complete the campaign soul tasks through delve battles. It just counts the normal battle rewards and not the “delve room” rewards.

I agree they should better describe what counts and doesn’t though.

I can’t really see the confusion here. Pvp awards battle glory whereas glory awarded in other game modes is more of a byproduct or added bonus. We get glory from treasure hunts but that can hardly be described as a battle. The only thing I can think of that would cloud this issue is if a glory gnome Battlecrasher turned up in a fight where glory wouldn’t normally be a prescribed dividend. But still that would be an add on as opposed to a prescribed spoil of victory.

I have passed on the feedback in this thread.