New Soulforge Troop: Leonis Tower As Emperor Khorvash gains more Favor from the people of the Leonis Empire, new allies join his banner. The Leonis Tower is now craftable from the Soulforge. It requires The Emperor Tarot card from the current Campaign rewards, as well as Legendary Ingots and Souls to craft. Once the Campaign…

Is the Emperor card consumed when crafting the tower?

It does NOT.
You can craft as many towers as you wish as long as you have soul and gold ingot

Apparently I have done the impossible. 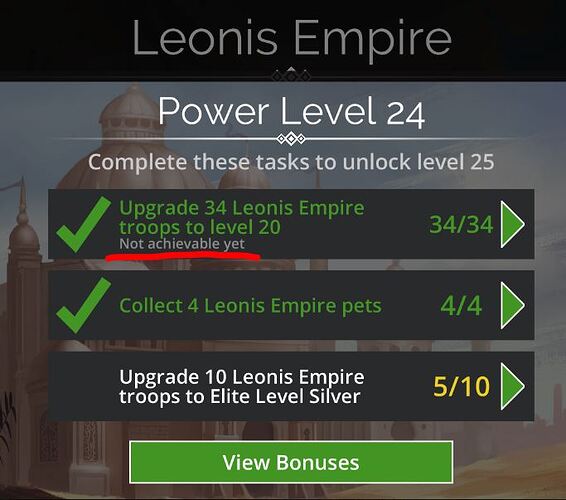 It did not consume the troop card needed to craft . I crafted it and still have the 1 copy of troop in my inventory I started with

Have to say I’m disappointed to see yet another character behind a paywall. Yes I realize it will come to vault in about 4 weeks but the chance of getting those troops from the vault is so extremely slim.

I’ve done well over 150 vault keys and still don’t have the forge or the sun.

I understand that a free to play game needs to make money but this really is becoming pay to win.

It’s pay to get it quicker. You do not need that troop to win. It’s $10 so not a budget buster at all. Some folks spend that on cigarettes daily.

Neither the Tarots, nor the tower is a game changer. You probably wouldn’t use them at all after you get them.

And if we want new content constantly, Dev has to make money.

How is this pay to win? No one will even use these troops.

This troop was a candidate for #stopTHEsteal. Yet once again fact overcomes conspiracy theories.

And yes it’s unfortunate that the devs have to make money. If only companies could make money and then not be expected to anymore. Yet for the cost of going to Applebee’s (plus tip) we just got 2 Mythic troops basically from Campaign 4. So the value is definitely there-ish. And if someone can’t afford $1 a week to play GoW. It’s still a great free to play game for them.

But 505 Games, if you’re going to insist on making Gems of War generate revenue like this. You HAVE to spend money on the game as well. It can’t be a one way street if you have any intention of keeping the game around for more years to come.

) hear that!
But it would be a bad joke if each costs 8 Power Orbs

) hear that!
But it would be a bad joke if each costs 8 Power Orbs

One 8 power Orbs(or just elite pass 1000 stars), 2nd one will be Xatheons type, will eat milion souls to craft and require 3 crappy weapons avaible to craft when respective kingdoms show up (ofc, these weapons will be part of elite pack of next campaign).

It’s pay to get it quicker.

It’s pay to get it at all, as long as you pay during the campaign. Yes, technically you can pull those special troops form the vault. From what is known so far you just eventually need to farm roughly 200 vault keys each week to collect them all.

I wonder how they are going to sell that to all future new players. Probably sucks to start with a collectible game that doesn’t allow you to collect all troops, even if you are willing to pay for them.

You do not need that troop to win.

That’s not how collectible games work.

How do I get Emperor? Dont reply me if this one also get added to the Vault. Just not in mood for it today.

How do I get Emperor?

You either buy the elite pass within the next five days or the account of a retiring player afterwards.

I already spent too much money in this game in the past, currently VIP 11. So I will just go ahead and suffer then.

This troop snuck in well under the radar.

It is not listed in any of the News or Events entries.

This mythic tier troop is valuable for kingdom power levels, if nothing else, and so it’s important to notify players of its existence as they may lack other Leonis Empire mythics.

I first found out about this troop today because a guildie in discord mentioned it, not because the game took a proactive step to say ‘Hi’. @Saltypatra, please consider taking that proactive approach.

People say 10$ is nota budget breaker. Well maybe if you live in a rich country.
We said the same thing when campaigns were introduced and at that time we ha Brazilian member, who it into perspective. He said 10$ is 1/20 of his monthly income, he is a farmer.
I am reasonably well paid software developer in Hungary and 10$ is around 1/100 of my monthly salary. There are places on the world where 10$ is a lot of money.

The release of the tower troop was another dick move! Releasing it on the last week just to sweeten the deal, and blocking it with an extremely rare find of troop fro f2p players. Also the tower is a very OP troop. This is clearly the p2w win category.