I am obviously missing something.

You must finish the run with the same 4 troops as you started. You can have as many deaths as you wish but if you will finish with the exact same 4 troops (the order of them doesn’t matter) it will count as “no casualties”

The problem is that people have reported getting having a run count for “no casualties” when they completed with 4 different troops.

My level 500 faction run also ended with a different team composition than it started, but completely full. I got credit for the no losses.

Do you remember what your starting and final teams were?

If your 1st slot werebear transforms into a torbern, and you last slot torbern turns into a werebear, it still counts as deathless

It’s very clear that delves ate no fun and the devs up the frustration with every release nowadays. Exorbitant numbers of minimum fights to succeed, zero summon and negligible skull protection plus a high chance of blocking your team due to all troops (except turdburn) summoning only one troop which is a potential nightmare to cast unless you are so low on health that you are compelled to take the risk in the hope that you transform and thus maintain a full deck. Awful on so many levels. It makes eyrie look generous.

My initial team composition was what @TheIdleOne suggested somewhere: Werebird, Werebear, Torbern, Werecat. My final composition had no bears, and one duplicate (can’t remember exactly at this point, but maybe the information is in the game logs I can’t see).

P.S.: Thanks, o Idle One, for convincing me to use the bear instead of a second Torbern. The ability to reset the board really did come in handy on the 500 run.

From the sounds of it, if any beast should be swapped for a second Torbern, it’s Werecat (who in theory has a niche, but in practice doesn’t seem to get much use for most players).

This game does have some weird rules as to what counts sometimes. In the past when I did delve runs to get to 500 (non faction), I used Angry Mob as one of my initial troops. Angry Mob has a chance of summoning a copy of itself. So I started with Hero, Angry Mob, and two other troops and ended with a Hero and 3 Angry Mobs (or even 4 Angry Mob sometimes) and it still counted as a no death run.

P.S.: Thanks, o Idle One, for convincing me to use the bear instead of a second Torbern. The ability to reset the board really did come in handy on the 500 run

I don’t know if this is supposed to happen but another advantage is the enrage from the bear’s ability seems to stick around if it transforms to Torbern. That was a big help during the end of my successful 500 faction run where my team only had Werebear left and the opposing team had a Torben. Enrage + Hunter Mark + a lot of skulls pretty much one shotted the enemy Torben and gave me the win.

On the flip side, we no longer have to worry about this room: 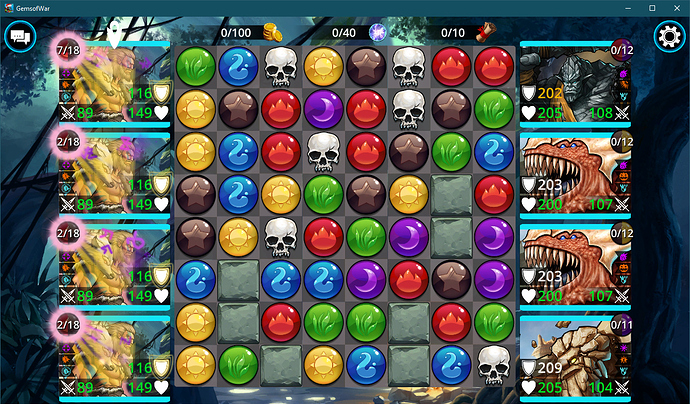 One thing that also could make transform (with this faction) more interesting is if buffs/boosts carried over and/or happened AFTER transforming.
If for example bear transformed and after that enraged you have a fresh and enraged troop, that has some potential.

It’s probably not intended but in the specific case of bear → torb, you do get an enraged torb as the outcome

Does anyone have a team to help complete up to level 500 with the event boost, I am stuck at level 300? Doesn’t have to be the true faction team team?

I still need Champion of Gaard (or any Sword’s Edge mythic) to increase to power level 10.

But I now I have a good idea how to work a team with Shield of Urskaya, I forget about this weapon. More offensive weapon than defensive team, but I guess I will have to get this one thru defensive abilities!

Works for me, probably slower than a Tesla team though