Valkyrie and Tesla are both options. You can certainly build a team around those.

Usually you just focus on boosting damage and this should be no problem with the Shaman. I got most times extraturns after casting with him. And if you have enough damage and a good amount of skulls on the board, then you can also cast with Setauri to finish them off. For me it’s promising…till now

Under good circumstances, the team can win quick and easily. The problem comes in the high probability of backfire, both from Shaman of Set and Setauri. Setauri is very dangerous as one miscast can lead to multiple skull hits being returned on you on the next turn. Setauri’s efficiency decreases from less enemies on the board and impervious troops.

From your screenshot, your first Chief Dargon would already be dead on a higher delve difficulty.

If this was a 3 room faction, it wouldn’t be an issue, but with this being 5 rooms, the chance of the AI landing 2-3 lucky skull cascade bursts is quite high.

I beat it on Faction 100 first try, but its not an ideal faction team for upper floors. 100s are always easy (in my opinion) and most 200s are usually doable.

What are the multiplier and chest upgrade probabilities based on? I see the room percentages from http://gowdb.com/extras/delvetable, but nothing that indicates which rooms can appear for a given delve. Do we know that any of those rooms (minus Dooms and Faction-specific) can appear in any delve containing a room of that difficulty?

If I calculate odds for Fang Moor with the assumption that all rooms are possible, I get a multiplier probabilities of min:3.55, avg:3.96, max:4.5 and a chest upgrade of 4.16, so I’m doing something differently.

As far as I can tell, individual room selection pools are kept server-side and cannot be retrieved from the client through any of the means I use to gather data on gowdb.

Also, I can’t believe the unreadable quests is still a thing. Come on devs, how hard is that to test before release? Multiple times now.

Oof. Shaman of Set and Setauri are absolute garbage. Bummer.

Anyone beat lv200 with faction team yet? What team did you use?

This faction only team can F right off. Worst delve ever. The Warrens is a close 2nd. I’m sure the devs are doing it on purpose because they know the weaker the team the more gems you need to throw at it to buy more attempts. Can’t even beat lv 200 unless you get an insane lucky streak for 5 battles in a row. Forget about lv 500. There is just no way to last 5 battles in a row without RNG killing you, 3 might be possible but not 5. Spells are supposed to be a good thing to cast, not in this team all spells have a 50/50 chance of killing your top troop. No word from devs on why suddenly delves are 5 battles minimum even though they know it’s already insanely hard with only 3.

And deathly silence on when they will make faction team easier like they said they would. My bet is they will never do it. /rant over.

Anyone beat lv200 with faction team yet? What team did you use?

I was going to answer this question 3 hours ago with parts of your rant that came 6 hours later.
But, I felt I had done enough bitching about the RNG this week.
You’re absolutely right though. This new delve team is the worst way to try and win in the game.
Having to rely on RNG with gem/skull spawns or explosions puts you on a fast track to a L.

What concerns me is @Sirrian himself is saying the delves are too difficult. Yet since that public statement the Delves have only been more difficult. Not less.
So if he’s unable to rebalance the game. Who’s really pulling the strings then? Cause if it’s not Sirrian leading the ship. Then the game and the community are most likely headed for an ice berg.
The best days of GoW were when 505 had little influence on the game. I’m hoping one day we can return to that Utopia.

What concerns me is Sirrian himself is saying the delves are too difficult. Yet since that public statement the Delves have only been more difficult. Not less.
So if he’s unable to rebalance the game.

If I remember correctly, his response was that the difficulty was an issue of chaos shards being too rare, resulting in the lack of opportunities to upgrade treasure hoards to the appropriate levels needed for reasonable chances of a clear. I’m still assuming that whatever the rebalance will be, it will appear in 4.3.

It seems apparent that the increasing difficulty of each new delve reflects design intentions that max level delves aren’t supposed to be clearable outside of the raising a hoard to an extreme (300+) level. As players keep showing how level 500 delves are clearable at hoards levels 100-150, the difficulty keeps racheting up on these new delves until these clears are no longer possible. The implications of needing to level each delve’s hoard to those kind of levels is a debate of its own topic.

I’m hoping one day we can return to that Utopia.

You, me, and practically every vet on this forum knows that ship sailed a long time ago. The game is far, far, past the point of no return on that front.

The only way to “win” with delves is give up on trying to get 2500 out of each one. It’s a pipe dream and an obvious trap. I’ve just been happy getting 2200 (hoard lv 100). The amount of gems and gold and time required to get those last few hundred renown is simply not worth it. Better to give the millions upon millions of gold to your guild. Imo the gold sink was the main goal with these delves from their conception.

What concerns me is Sirrian himself is saying the delves are too difficult. Yet since that public statement the Delves have only been more difficult. Not less.
So if he’s unable to rebalance the game.

If I remember correctly, his response was that the difficulty was an issue of chaos shards being too rare, resulting in the lack of opportunities to upgrade treasure hoards to the appropriate levels needed for reasonable chances of a clear. I’m still assuming that whatever the rebalance will be, it will appear in 4.3.

What concerns me is @Sirrian himself is saying the delves are too difficult. Yet since that public statement the Delves have only been more difficult. Not less.

I agree, and it’s been kind of weird - my assumption has been that these are the ones they had planned already and they just haven’t gotten around to whatever fix they had in mind, yet. But…

Just let us use our Hero in faction team. Problem solved.

Please no. A hero would ruin the whole challenge and had nothing to do with faction troops only. You simply could use titan class for barrier and Dragon eye and everything is a cakewalk.

There are currently 2 points which made it hard to play faction troops only: too many rooms to pass and the less amount of treasure troops to upgrade the hoard.

Option would be, that there are more ways to get this treasure troops (for example soul forge) or you add something like a “teleportation orb”, which allows you to skip a special amount of rooms.

Lack of treasure troops is not a limiting factor for me. It is lack of gold. I recognize that gold can be acquired without limit, but I don’t want to spend five hours a day on PVP to be able to use all my treasures—I am already approaching burnout at my current level of activity.

The teleport idea is a good one. Maybe we need a “potion of fireball” added to the list of things to come in future versions. 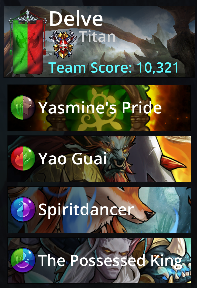 Anyone beat lv200 with faction team yet?

I beat level 100 after 9 tries. Wasted my 3 daily delves and 6 faction event sigils doing it. Was just going to use my daily delves but after I kept failing that I got pissed off and had to do it no matter what.