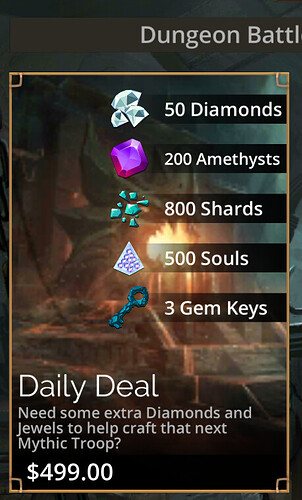 Maybe they also use Dungeon door generator for the Daily Deal offers?

Really though, these broken offers show up way too often, you’d think there are at least some sanity checks in place to prevent the most ridiculous ones. Just being able to offer a single real money purchase for $500 feels wrong.

That’s a missing “,” in there. I had something similar for another offer. But that people even consider this to be a real offer shows how greedy we expect them to be.

Hold up a moment, know that this is not a first time.

Mobile Android phone* ** [Screenshot_20220828-222315] * What you were expecting to happen, and what actually happened: _$499.00 daily deal How often does this happen? When did it begin happening? Just seen it today Steps to make it happen again I clicked on Dungeon in Game Menu → Dungeon Offers

Thanks for finding that. I was sure I had heard of this bug before, but I couldn’t find it on the forums.

This is the first time I’ve seen it, myself.

Since that report was 2 years ago, I guess it was worth repeating.

I’ve always had prices in Euros for Android but now it shows the image above plus there is no weekend flash offer and all cash offers from shop tab are gone.

Can’t look at my PC account until tomorrow to compare.

Edit. All back to normal now less than an hour later.

The account on which this happened – unless I’m remembering incorrectly – got unlinked from its Google Play identity in a really weird way. Google Play currently thinks it’s both logged in and not logged in. Removing the account and reconnecting to it doesn’t seem to help.

The $500 price tag might (or might not) be associated with this. (As I said, I’m only about 90% sure I’ve got the right account for the original screenshot.)

I think I’m right, because the $499 error has occurred again just now.

The third consequence I’d forgotten is that there are no cash offers in the Shop at all, and only the Daily Deals tab in Offers. So the only cash offer shown in the entire game is the $499 Dungeon “Deal”.

To complete the picture, here’s what happens when I click on the Shrine icon (which, annoyingly, still has its “urgent notification” icon): 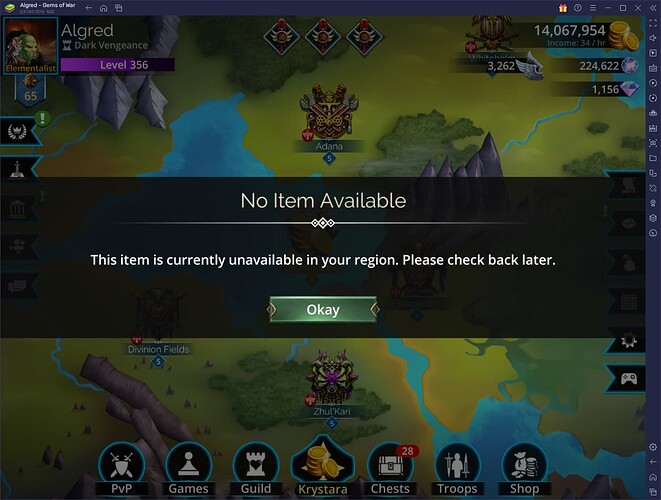 @Starlite is the price still displaying as $499 for you on your android account?

This topic is temporarily closed for at least 4 hours due to a large number of community flags.

This topic was automatically opened after 8 hours.

More like infinite markup, given that the cost is effectively zero.

Because we know that there is a Purchasing Gnome living in the Vault who makes weekly orders for game assets, carefully assigning the retail price based on ACME Wholesale Game Asset’s™ costs, and that sometimes they don’t ship quite enough to keep a lot of each item in stock perpetually.

Btw, I also had a lovely $499 offer in the dungeon a few weeks ago. But I think it only appeared once.