Hi,
I would like to see a medal set selector on the screen when you can push the “To Battle!” button.
It would fit well in the place of the old battle difficulty settings which were removed anyway.
What I would see is my current medal set and two little arrows to cycle through my preconfigured sets.
Bonus if the medal set selected on a battle screen do not changes the global medal set. It is so annoying to do the event battles and then doing other type of battles with the event medals.

Bonus2: medal set selector arrows on the main screen, so I wouldn’t have to enter the medal configuration screen just to change to another set of medals.

My suggestion. Either 1 or 2 or both as selectors, 3 as a selector which cycles through my sets or a drop down menu, this is the less space consuming. We can find more space on the main screen as well.
Look at part 4, just move the numbers to the pointed locations, the xp bar is a useless information IMHO. To find space for button “2” move the glory indicator to edge of the screen (5).
Menus (6) to make space for “5” you can compact the menus into one button these are less frequently used so not a big deal if one more click is needed to reach them.

Regular battle screen. I shot this in delve but vault, pvp, and explore look the same.

On main screen I vote for “3” on the battle screens I would replace the crest (2) with the selector.
Thank you!

The rule of thumb around here now is, if it can’t be monetized it wont be added.

The explanation given by the devs was that there was no space for it that was available in all screen aspect ratios (please don’t ask me for a link—I have no clue where/when that came up last). The old difficulty selector would be a great place to put it, except that some game modes now use that screen spot for troop restrictions.

Make it vip as free explore. 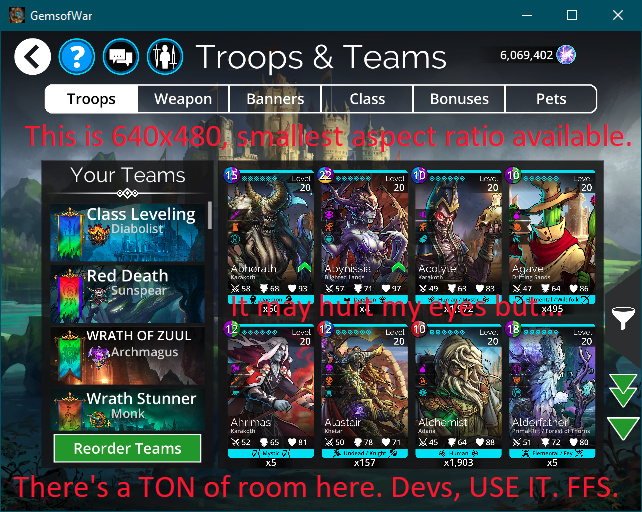 Pinging all the devs who care… and done.

The reorder teams button gets changed to a drop down sub menu and provides 3 options, reorder team, edit team, and medal select. The idea is already in play with the search feature.

You could even just change the troops/weapons/etc to icons and provide more room to display another category.

You are talking about the wrong screen

This has been mentioned in a couple of threads, and although it’s probably been seen, I haven’t seen any firm indication that it’s been read by a dev. Could we please get some kind of indication that this is known to have been requested? I’d hate for it to slip through the cracks – it’s #1 on my GoW Christmas wishlist (in terms of small QoL changes). Essentially, I fully support the idea of being able to change one’s Medal loadout at the Battle Preview screen, rather than having to naviga…

I’ve had it. I’m done. I set up a whole new team for a delve, realize I probably want to change up the medals … go to the map … change the medals … go back to the delve. And I’m good, right? I start? No, I wasn’t good, it reverted to the other team while I was gone aaaaaaand I now need to play that one for nine rounds. Sue me for forgetting the UI is this shockingly bad while I’m overstretched hitting these lengthy and monotonous events. We know the UI is bad. You should know the AI is bad, dev…

Lots of good suggestions and mock ups in the comments, too, not just the original post(s).

The explanation given by the devs was that there was no space for it that was available in all screen aspect ratios (please don’t ask me for a link—I have no clue where/when that came up last).

So the World Map suggestion may well be on the cards at some point.

Wow, I wasn’t expecting them to implement it so quickly! Thank you, devs!!!

Edit: This was satirical, and intended to show how clean adding a Medals button to the battle prep screen could look, and a mock up of what I think would be the easiest solution. I apologise for leaning too much into having fun in an exclusionary way. I’ve left this so that the posts below make sense, but am still happy to remove if that would be preferable, although I’d probably still offer the mock up as a clean-looking suggestion and as part of my response to the suggestions in the OP.

I really support the suggestions made in the OP, in particular the one for the World Map since it would have minimal impact on the visual load. The main complication that I can see in that case would be the loading whenever a different Medal set is selected with the arrows, making cycling through them a bit annoying (but probably still better).

I can’t see that medal icon on pc yet, neither on android.
I think it was the quick and dirty solution, and while it is better than nothing I still hope for a more sophisticated solution!

Okay, you got me, it’s a fake image. Better than nothing is what I was going for (also satirical, because nothing is what we have right now in terms of changing Medals at the team selection screen), thank you

It took me a while to notice the medal icon, but once I did, it does show how “Easy” it would be to fit it on the screen. Whether or not it would be easy to make it work, is another question.

I’ve suggested in the past that what seems easy to me would be to have the whole world event be it’s own little arena, similar to arena. The medals of the outside world don’t work there, and conversely, wouldn’t work in the outside world. The devs made it all too complicated. Perhaps intentionally.

I don’t expect from the devs to make it happen in one day, but I think it shouldn’t be too hard to put a new control on a screen. So sometimes in the near future we may see it happen.
I can live without this but it would make the switching of medals so much easier.

We clearly see the “no room” BS is just another effort issue. Not something that can’t be done.

Pinging all the devs who care…

But you pinged nobod… Oh, I got it.

So the World Map suggestion may well be on the cards at some point.

This seems like it should not be that complicated… From the Team Setup screen the Manage team button opens up a window with several tiles for additional actions. There is plenty of room to downsize the “Suggest a Team” tile and add a “Choose Medals” tile.

From there they could let the player select a team-specific set of medals in the best case scenario (understandably the more difficult option to code and a larger scale change), or at minimum allow you to choose which of the 3 main medals setups that team should use. The latter seems like it should be very doable without a tremendous amount of effort, and would likely be plenty to satisfy the concerns of the majority of players.