Shows how very little these devs care and was a convenient way to ignore the issue.

I wouldn’t expect anything less from them.

Shows how very little these devs care and was a convenient way to ignore the issue.

I wouldn’t expect anything less from them.

It was the bot who locked it due to flags by community members.

The devs have nothing to do with it other than having the bot work on this discourse platform.

That thread start talking about political issue and I think it is best for the game to stay away from that.

They sell flag avatars, politically oriented pets, but God forbid anyone speak about politics without paying real money for it.

@awryan You are right, saw that after I made this.

Not like there’s a way for us to find out either way.
May have been an employee too lazy to comb through the thread to weed out inflammatory posts.

You don’t think someone works and checks threads on the weekend, do you?

Not for this game community…

It was a bot. It always happens when there are too many flags. I guess it’s supposed to give actual humans time to review the stuff.

Yeah, but it’s a difference to have a country flag or a pet vs telling people that you hope they suffer - which got flagged and let to the thread being closed for now.

And it’s been the community asking to please keep politics out of the thread - can’t blame the devs for that. There was just some person who couldn’t stop themselves from being awful.

Yes please. Keep the game out of politics.

I will say I think the bot might be a little broken. The threads state they will automatically unlock in X time but they never do, the timer just refreshes.

The amazon leaking the patch early thread was locked on Feb 25 and still remains the same.

Just confirming that it wasn’t a Dev who locked the thread… it was the community itself.
One of the upsides of our forum software (Discourse) is that it allows the community to self moderate.

So if something happens while Devs are offline, the community is able to lock threads and hide posts by reporting it.

There is a trust system to protect against the system being abused, if you make false reports your trust score is reduced so that your reports won’t affect anything.

So the forum bot can take action based on community reports and flags and then during business hours a dev can check the reports that were made and check to see if the community guidelines were really broken or not and unhide the posts or unlock the threads.

Community self moderation is our preferred type of moderation, we would prefer to only step in when there’s guidelines being broken badly and community members haven’t moderated it themselves or if we see that the community moderation is being abused falsely.

Having said all of this, I’m leaving the thread locked because it did get quite politcal and abusive in there. Re-opening it would just be inviting more of those sort of posts. Thank you to everyone who posted in there civilly though.

@Kafka i don’t think it was intentional since the thread unlocked automatically. Might be worth looking into. 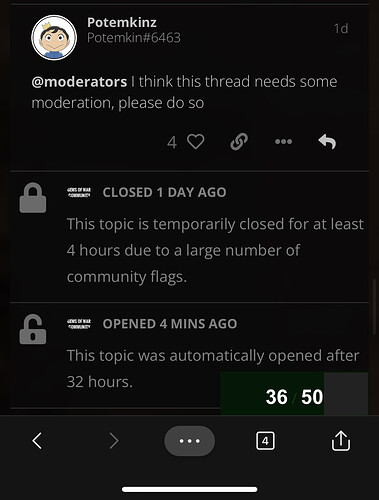 Google will be suspending (or already has suspended) their billing system in Russia. Might want to hurry up if you were considering buying in-game items.
(Changing your billing address might work too)

Changes to Google Play's billing system for users in Russia and Belarus -...

Due to payment system disruption, Google Play has paused its billing system for users in Russia as of March 10, 2022. This means users cannot purchase apps and games, make subscription payments o