What you were expecting to happen, and what actually happened:
With a faciton horde level 10, there is a x3 multiplier for defeating the boss room. Added with the regular Room Treasure Multiplier (in the top right) at x2 (decimal), that is a x5. But when I get ingots, I am only receiving 4 ingots. I had a level 9 chest, saw a mythic ingot on top, and a mythic ingot on bottom, and received 4 ingots total. Shouldn’t any appearance of an ingot be at least 5? This happened before, I received x2 ingots with a horde level 10.

How often does this happen? When did it begin happening?
It is happening in Hall of Guardians, with horde level 10.

Steps to make it happen again
Complete a delve all the way through in Hall of Guardians.

Do you mean the “quality” is 10? If so there is a PLUS 3 chest bonus awarded upon beating boss delve room not a X3. So if you finish with a chest level is 5 for example, the final chest would be an 8. If your hoarde “level” is a mere 10, then you just get a few extra HP added to your troops. Reread the descriptions and see if you still think there’s an issue. 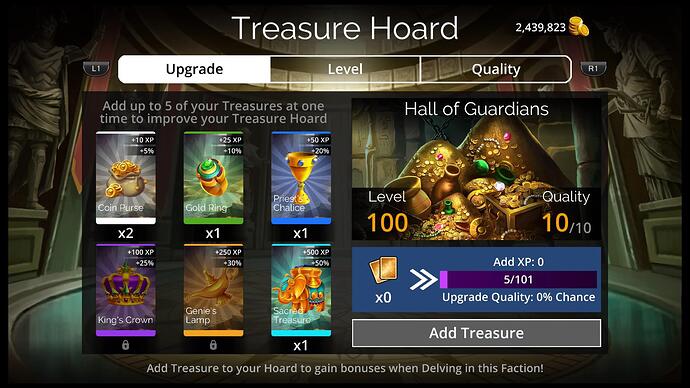 I’ve noticed the last few days ingot rewards are way down. This morning I got almost 60,000 gold, and 4 Legendary ingots for a lv 8 chest (and my QL is 10). So with my 2x Ingot modifier that means If I had less than quality level 8, I would only have gotten 2 Legendary ingots. And I also had one with only 4 mythic ingots lv 8, so that again means it was awarding me only 2 mythic ingots.

I haven’t seen a x16 Ingots in a few days. Perhaps that download/update a few days a go was a secret nerf. Too soon to know.

“They must have nerfed ingots” is going to be the new “I think gnomes were nerfed”.

We only get 3 tries to Delve a day, so getting “a bad run” feels amplified and it’s also pretty likely someone can get a no-ingot day.

Here’s how it works, more or less.

The level of the chest is how many “slots” you have. Each “slot” rolls RNG to determine what its prize will be. Somewhere out there someone’s reverse engineered all the prizes, but it feels like this:

The vast majority of Delve chests will be mostly gold or glory with a small amount of shards. In theory you could get 20 pre-multiplier mythic ingots. This is like hoping for 4 orbs out of a Vault Key. I find my most common chest is like this. Next-most common is “a lot of chaos shards or some legendary ingots”. The ones with high ingot counts are rarest.

There are going to be days you get no ingots. That’s normal.

We only get 3 tries to Delve a day, so getting “a bad run” feels amplified and it’s also pretty likely someone can get a no-ingot day.

I did 6 delves in two days, yesterday the most I got was 6 L. ingots, with my quality level 8+ level, that means I would have gotten 3 ingots with the Quality Level upgrade.

Last week I was averaging 8-12 ingots minimum. which means I was being awarded 4-6 ingots before the x2 modifier.

I do admit it could be bad luck, but they did make changes the other day, and since then I have not seen many ingots drop.

I haven’t had a day where I received no ingots yet, I guess i have been lucky in that respect.

I got 16 mythic ingots in a delve chest yesterday. Your bad luck will turn.

From My Drop Count Data:

I might be in a bad streak myself, I see Ingots drop as often as before, but the amount I get is more often 4-6 compared to last week, when it happened that I got 8-12, even 18 and 24 sometimes.

Oops, ok, let me try again. Hoard Quality is 10. In the hoard menu for quality it says x2 ingots. If I opened a level 9 chest, and saw a mythic ingot on top, and a mythic ingot on bottom. And had a room multiplier of 2 (decimal), and completed the delve defeating the last room. I received 4 mythic ingots. I thought that was not correct, because I saw a mythic ingot on top and another on the bottom when claiming rewards. Regardless, the faction delves have given me a ton of very much appreciated ingots thus far.

Thanks for the responses!!

You get one drop per level of chest. A level 9 chest is 9 drops, each random and each multiplied by the room multiplier and rounded after each step (any ingot @ 2.45 = 2 ingots, any ingot @ 2.5 = 3 ingots etc, rounded then doubled for hoard quality 8+). The chest open animation always resolves exactly 4 things shown, showing by unique types of item gained, and if it runs out of unique types it repeats indiscriminately regardless of how many “drops” you got of a given item. If you had a 2.x modifier with Hoard Quality 10 that resolved as 4 ingots, you had a < 2.5 modifier (and if this was in Hall of Guardians, it means you either didn’t completely clear it, or you picked the 0.5 modifier start option) your 9 drops were 1 mythic ingot and, most likely, 8 drops of various shard amounts resulting in 4 mythic ingots and 50-100 shards total. Your chest open animation before the rewards screen would have shown 2 shards and 2 ingots, because only two unique types of thing were in your reward.

If the faction you are at hoard quality 9 is regularly receiving groups of 8/16 ingots, you are most likely still progressing the level on this delve choosing the rightmost option, starting at 2.0 modifier and ending at 3.5+. Which would result in a single ingot drop being resolved to 8. As soon as you wall out and can’t do full clears anymore in this delve, or worse, start taking the leftmost “lower level” delve option to be able to clear it or because you don’t have time, your ingot loot will drop precipitously (2.0~2.45 modifier is half as many ingots per drop as 3.5+).

The more times I explain it, the more I’m convinced that the delve loot system was designed to be intentionally obtuse to prevent people from finding out exactly what drops they got, and, by extension, the cost/benefit for actually (irreversibly) raising delve level.

Thanks! The chest open animation explanation solves everything!

Though, I am mostly doing the lowest level delves at this point in time because I forgot to pay attention during the faction event as to what level I was at, playing out all my sigils… And now a couple of my highest delves, can be too difficult to complete.

Now I am wondering if I should just play the highest level delve and simply get defeated to get the higher multiplier. Will give it a go and see.

Now I am wondering if I should just play the highest level delve and simply get defeated to get the higher multiplier. Will give it a go and see.

You don’t get the multiplier if you lose the room.

I am glad you got that sorted @eneris! I’ve marked this as resolved