Recent interview with a gems developer. 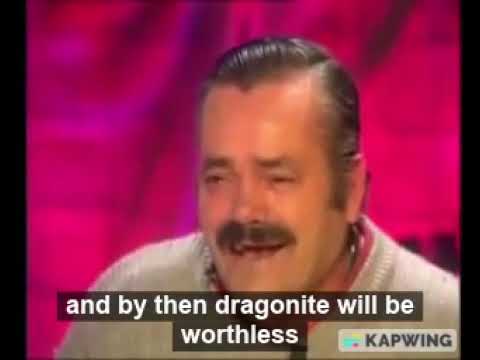 So true.
Literally the best thing I have seen on this forum.
You should remove the (parody) from the title.

I already had an idea to ask @Hawx @gary_dils @ElDuderino @TimeKnight @sls and all the other tool and supportive creator to shut down their helpful tools and such things like weekly spreadsheets and all the stuff around.
I wonder if we can make this happen and what the response would be…

Nah, must be parody. A dev wouldn’t give that much away to the public.

shut down their helpful tools and such things like weekly spreadsheets and all the stuff around.
I wonder if we can make this happen and what the response would be…

Unfortunately, that would only hurt the players.

You should think twice.

If those people, I mentioned above, shut down their support, half of the playerbase will quit after 2 weeks.
And now tell me again this will only hurt the players…

I doubt that would happen.

We would be very inconvenienced, sure, but I don’t think that that many people would quit.

It still would not change anything about dev attitude. There is a certain contempt toward the players, and taking away our input (whether it is helpful tools, videos, maintaining guilds, or commenting here) would not make them think any better about us.

funny video =) sadly you can relate to some parts being true.

Certainly things wouldn’t be as easy to navigate through but other creators would surely emerge. I’d say many play this game just out of habit, matches don’t take that long so you don’t have to be committed if you don’t want to be. Many people just play on their mobile device possibly not even knowing about what a steam or a discord is. Players that don’t use this forumor any of the great helpful tools some managed to provide.

I also doubt that too many players would quit.

Some new(er) players would surely get lost due to the massive amount of information, mis- and non-. No dev here would ever care about that. Of the yearlong players only a small amount would get lost which happens anyway due to multiple reasons. devs not doing good work is just one of those reasons and this has been going since years without a significant amount of the playerbase quitting. You could say the players in some form acclimatised to the circumstances they deal with, some heretics may call it greed and idiocracy.

I don’t care about their attitude.

They don’t care about the community.

Loosing half (or even if it’s just 10%) of the players will get them less money.

Acknowledge the fact that they give us the middle finger every week for month now.

How long will this post last before it gets inevitably taken down? RIP to a legend BTW

Haha that video is awesome, laughed so hard!

To @CaptainAwesome , I have pretty much already stopped doing youtube videos. I pop up with new pure faction clip every once in a while and if devs actually release a good mythic/legendary troop. Me stopping releasing videos doesn’t matter though as I have such a small follower base. If Tacet would go full stop mode, that would be different case…

Loosing half (or even if it’s just 10%) of the players will get them less money.

Looking at their pricing, they mostly care about whales. And those people probably won’t stop playing just because of losing some outside tools.

They would get less money, but I still think it would hurt the players more.

Acknowledge the fact that they give us the middle finger every week for month now.

Didn’t say anything to the contrary. They do.

They also don’t listen to the players at all. We asked for fewer events during GW and got even more. Yeah, I’d say that’s flipping us the bird.

“What are your plans for the future of Gems of War?”

“To make the game even more enticing and fun, we plan to replace the weekly 24 or 72 hour events with three daily event cycles of delve, invasion, raid, journey, vault, bounty, arena and tower, each lasting 1 hour. Of course we will adjust the amount of rewards so that regular participation remains important both for players and guilds. We are confident, that our players will love it.”

See, there is always a way, things could be made even worse.

Too funny. Almost fell over my balcony watching this. I come on here and see a lot of comments on what’s so wrong about the game and I get it. In my honest opinion, ya gotta be a hardcore gamer to pick up on all the things that’s off in this game because man, it’s just a puzzle game.

Of course if the bad things weren’t addressed, there wouldn’t be anything to fix right

I mean kudos to those who point these things out. I get the complaints, most of them I wouldn’t have noticed if I didn’t come here to check up on things (guilty as charged). My only complaint so far would be to make gems more available, drop gems like you drop glory, (I would honestly say like how gold is dropped but that would cause a heart attack, I think). If events need gems to continue, why not make it available more, or spend gold for them.

I like this video man, I want to see more, because I know we all can use a good laugh when it comes to these things.

If the community tools and guides went away, I’d quit. The last thing I want to do is play more GoW to finish an event because the scoring rules are more opaque than Vantablack.

Maybe if everything went down for a couple of weeks, the devs would come to their senses (for a while anyway) and look into ways to stop the monsoon of turds they keep dropping on us.

In all seriousness, I’ll say here what I’ve said on discord, the amount of projects I have on the go in GoW is actually insane now and I can’t continue to produce guides, tools and offer support to so many areas of the game without affecting the quality or my sanity. Currently both are suffering.

As you have probably seen, I have a lot of projects on the go in GoW

This is before I’ve even started to play on my own GoW account. Nobody is forcing me to do this, I do it out of my own free will but It’s a lot. I do it because I feel bad knowing that I know the solution to something that could save GMs time and players resources. I know people say that I kiss the devs asses and yes, sometimes I do but they could quite easily turn around and say “no more access to the beta server” and then the community suffers because someone has to spend gems on a live event or rush around doing it at reset.

I don’t know what the solution is to the state of things at the moment but something certainly needs to change so that people like myself aren’t burning themselves out trying to help people up onto life rafts if you get what I’m saying. There’s my little rant over. I don’t want to punish the community but I don’t want to facilitate bad practices either.

It has been said a couple of times in this thread, that the players, mostly a few shining examples, do too much additional work to support a game, that, by itself, does not deserve it. I would agree with that thought and suggest to scale back all public outside projects for a while. It may just not have the amount of impact on the playerbase as a whole, that some think it may have. Not even sure, if the really big spenders are in top guilds and do check those sources.

However, if the volountary testing users went on strike for a bit, the next update certainly would look… interesting. Both the inevitable flood of bugs to fix and the dissatisfaction among users for it might get the development team to finally show some movement.

You have to grind on a test server? Maybe even pay real money when purchasing shop offers?
Aren’t the ones, who made this thing, aware, that it is not meant to be competitive? An option to edit your amount of ressources would be the least, you could ask for.

You have to grind on a test server?

Salty sent me some gems once in 2020 and Kafka sent me some a couple of months ago so we could purchase dragonite to test the offer in the dungeon shop was working as expected (these gems are not on my account on the live server, the only people on the test server are other testers so I just want to make it clear that I’m not being given resources that I can compete against paying players) so I’ve kind of rationed myself some gems from that but yes, in short, I do need to either play events on that server to grab leaderboard rewards or annoy the devs in the hopes of some freebies.

All that said, the point of that staging server is to test updates and not to play events to develop strategies to save players on the production server a few gems so I don’t really want to draw too much attention to what I need the gems for.

While I would of certainly liked some dragonite for example to test with, I think the fact that I didn’t earn any on beta made my feedback on the new dungeon more realistic with the frustration the average player would be feeling

This was one of my main beta testing gripes. It costs the devs literally nothing to give testing accounts lots of resources to test things like drop rates, or test upgraded units, etc. It doesn’t have any effect whatsoever on the real live main account. But the doling out of resources to actually test the content was so parsimonious or non-existent. I get wanting testers to accurately represent what the live release would be like, but you can do that WHILE also giving the new mcguffin resource to actually test on crafting recipes and things. It doesn’t have to be famine when feast costs nothing but dropping the resources into tester accounts via in-game mail.

That’s how it’s usually done in other games - you get the resources you may need in order to test everything.

But other games also value the feedback of their players…