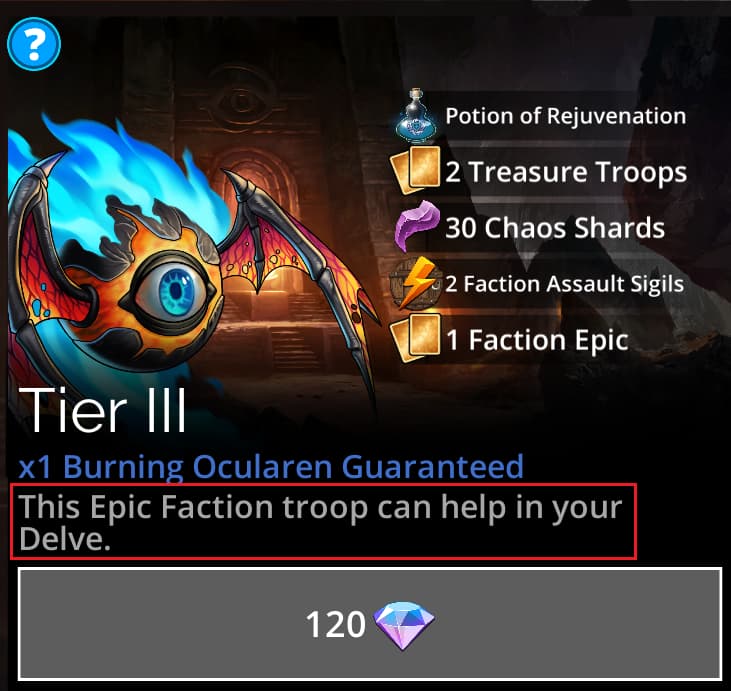 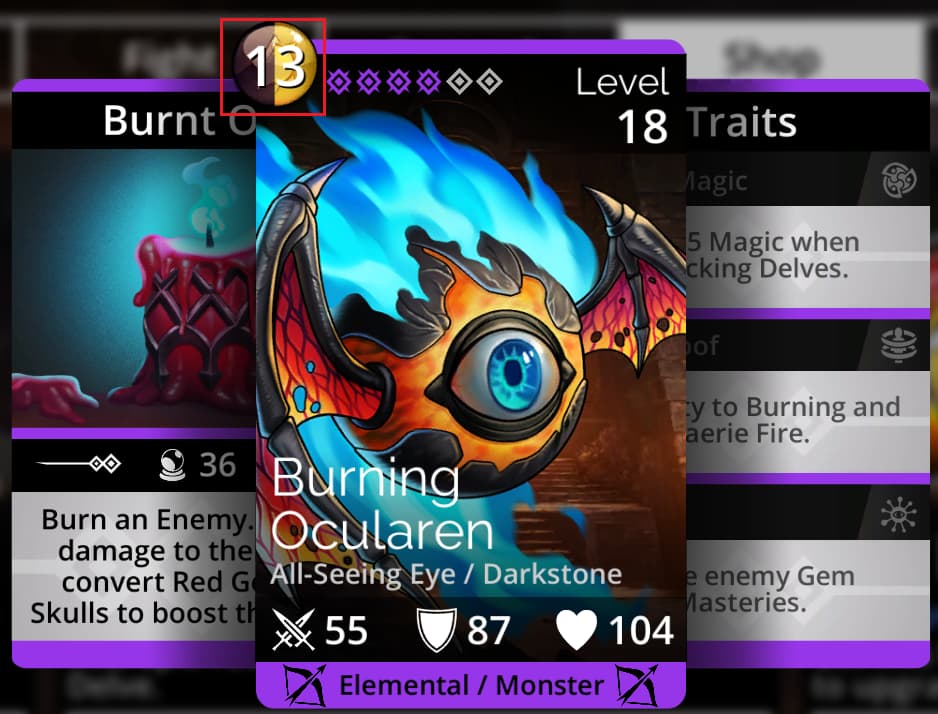 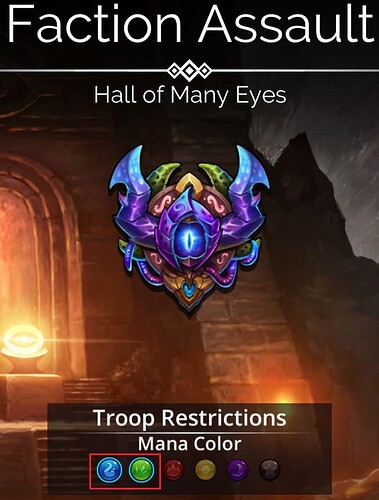 What you were expecting to happen, and what actually happened:
I was expecting the new troop specifically advertised to help me in the new delve event to help me in any way. Burning Ocularen can’t be used at all in its delve, neither for regular runs nor for pure faction runs, because it doesn’t use blue or green mana, the colors the delve is restricted to.

How often does this happen?
Way too often. I mean, an entirely unusable troop as the main event shop feature? I do hope this receives a real fix instead of the ever popular “works as intended” treatment, because the intent here would be difficult to see as anything but malicious.

Steps to make it happen again
Ignore a pile of baffled community feedback for over a month, while it was still time to fix the issue.

Technically, it can be summoned by Watch Mother. But yes, it’s a pity that you cannot add this troop to your team.

Technically, it can be summoned by Watch Mother.

Now I wonder if that even works, the summon pool might be hard-coded to the four standard faction troops. Would require purchasing shop tier 3 to test, I’ll pass for now.

Steps to make it happen again (Extended Version)
“Keep using programmers who do not play the game, coupled with mods who are not dedicated enough to keep an eye out for early warnings given by the players”

Second, Yellow/Brown coloring. This is especially notable because, as things stand now, you wouldn’t even be able to use this troop in the All-Seeing Eye delve . Unknown if this signals a new rule incoming for delves that allows faction troops to break the normal color rules, or if this is an embarrassing first-pass oversight that will (hopefully) be fixed before the troop actually goes live, since it is looking increasingly likely that this is a thing that will come to pass. Or, if it isn’t even intended to actually be usable in the delve, which would be a huge let-down given previous speculation on these troops being added to potentially give a few alternate options to tackling pure-faction delves.

Technically, it can be summoned by Watch Mother.

Yes, sorry, I forgot it. Tested the weapons: Chalice of Eyes summons this Burning Ocularen, and Jar of Eyes too.

You’d think that there would be a super easy fix to this problem. You program delves to either allow A) troops which are restricted to blue/green mana, or B) troops which are from All-Seeing Eye kingdom. Done. That way it allows for using Pure Faction troops which don’t fit that color scheme. I guess that was put in the too hard file unless it just got lost in the shuffle like so much else.

Exactly. It has to be a bug on how they are selecting from the database. Someone forgot to add the new rule to the select statement.

There are many things in the game which are working as intended and utterly stupid at the same time.

I will have to get some help from Metallica to answer you.

It’s been changed, Burning Ocularen is now yellow/green, allowing it to be used in All-Seeing Eye.

I’d really, really love to hear the story behind this one.

did they fix the troop image in battle where you can only see the top of its head?

(edit: Yes! It looks like they did. So happy they were able to do so without us all having to download 960MB of art assets again