Ok, so the last few months have been focused on the Dragon eggs, and we got feedback from the team that something is in the works. I would now like to ask for some feedback on the Hoard Mimic, and I would hope all my fellow gem players that have yet to get this troop would keep this topic fresh so it does not get ignored.

I don’t have the Hoard Mimic. I am only missing one mythic at this point. The first few months like many I pounded explore 12 runs to try to get the troop. I counted 38 total Hoard Mimic boss fights. No Mythic troop. I slowed down dramatically at some point as I was starting to get burnt. The thing is, the amount of Mimic, and Hoard Mimic fights has dropped like a rock the last few months.

I am no closer to getting this troop now that I was months ago.

Is there ANY plans to give those of use who have put thousands of hours into this game a path to get this troop, or is working as intended and will always work this way? Please give some sort of feedback on this.

I am in the same boat as you. Done a ton of exploring. I have come to the point where my brain does not believe the Hoard Mimic is in the drop pool at all when I get a Hoard Mimic battle. Those are rare as hell and I had 20. I just played an awful lot. Sorry for your bad luck, but we are dealing with a system here that is inhuman to deal with. Don’t expect any replies or changes.

I have crafted 12 dragons and 7 has been the same dragon too, 4 unique in. To make another example. (This is my own problem tho, that have been gamble addict in the past and just couldnt stop getting those eggs.)

And I heard Campaign weapon were not given? People paid for it. How can one trust anything that is said and done in this game OR if actually something works as intended. I feel we players get screwed over so much that it hurts to think of.

I’m in a boat slightly behind the TC. I’m missing roughly a half-dozen “ordinary” mythics, I have only hatched one Gem Dragon Egg, and I don’t yet have the Hoard Mimic. (I also don’t have the Onyx Giant from the last campaign; I could swear that there was a notification in my Guild’s chat that somebody in our guild pulled a copy on Monday but I also could be mis-remembering right now.

For me, this is a low-grade irritation. My “eye test” / “confirmation bias” suggests to me an uptick in the frequency of ordinary Mimic battles after the mythic fight, but I’ve probably seen one Hoard Mimic battle in the past couple of months. I do a fair amount of Explore 12 on a daily basis because I’m several kingdoms behind on my medal tasks for kingdom power levels – although most of them are for kingdoms where I couldn’t accumulate more stars even if everything were medalled up.

I guess it’s bothersome, and I wouldn’t object to changes that would make it seem less likely than the odds that I’d get mauled by a grizzly bear and mauled by a polar bear in the same day (and without visiting a zoo)? But it’s also one of those things that’s a much lower priority for me than other changes the developers could address. For example, books/deeds/writs and the quantity necessary to catch up in those areas where kingdom stars are concerned.

I got 1 Hoard Mimic troop yesterday. Another 1 today

I kinda do a lot of Explore every day though.

I’m at the point that I am basically giving up on ever getting the Horde Mimic troop. I like a lot of others grinded the hell of out E12 trying to get it with no luck. I didn’t start actually tracking the number of boss chests I completed until about 6 months ago.

And with the current Kingdom Pass running and having to hunt down the battle crashers, my E12 runs have dropped off completely. I’ve just been doing E1 to get it over with as I don’t feel like wasting more time than I needed to get the 10 of them.

With that as I don’t play but about a little bit each day, over the past 6 months I’ve had 1621 boss chests completed, of which only 5 have been Horde Mimics, and none of them gave my the troop. Meanwhile, I have guildmates that have done nowhere near this many and have 4 or more of them now.

The RNG and sheer luck it seems that you need to get this is complete BS. I don’t even feel like I am working to getting the troop as its purely random. I could grind this for the next 5 years and never get it. Things like this is why people quit games.

I got 1 Hoard Mimic troop yesterday. Another 1 today

I kinda do a lot of Explore every day though.

I think a lot of people explore everyday. The question is are you doing it every hour?

I went hunting for him in the summer. Finally got him afrer recording 746 boss chests, 65 mimics, 7 hoard mimics.

Posting this to remind that if you are actively looking for the Hoard Mimic as I was then make sure to just do the “lantern” kingdoms. The extra 20% mythstones make a huge difference to the number of ‘nul’ kingdoms (when you don’t make it to the Boss chest)
You can get a run of 8 chests doing LANTERNS but it is only 4 or 5 not which adds up to a lot of time doing wasted battles !

make sure to just do the “lantern” kingdoms. The extra 20% mythstones make a huge difference to the number of ‘nul’ kingdoms (when you don’t make it to the Boss chest)

I noticed this as well.

Not to forget the additional bonus for upgrading kingdoms to level 16. Combine those two, and you got somewhere around 95 per run, so only one empty run in 20.

“I went hunting for him in the summer. Finally got him afrer recording 746 boss chests, 65 mimics, 7 hoard mimics”

The thing is this is the problem…I have over 40 hoard mimic chest and I don’t have him…throwing myself at the game is doing nothing. People who have the troop lose interest in changing something that punishes the unlucky…and this game has a built in pity system for every other system outside the dragon eggs…

I finally got the hoard mimic last week. Honestly, it feels like an intentionally punishing end game goal telling even experienced players, IF you want this, you might have to put in hundreds of hours! More guildmates getting it pushes you to try for it.

Just got this fool… 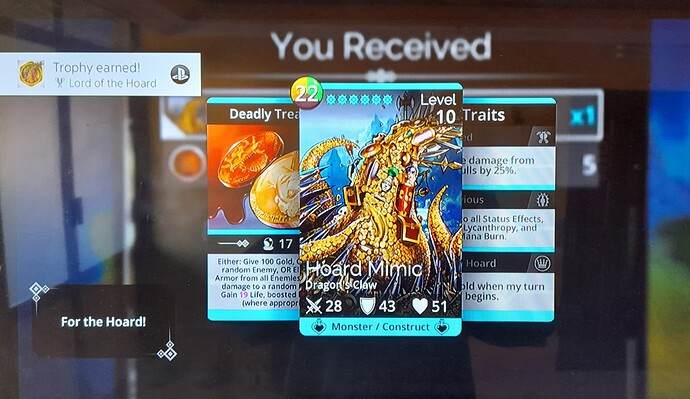 All I did was kept exploring at difficulty 3, the same kingdom for about 2 weeks. I was exploring for hours (about half the day) everyday, I did explore other kingdoms as well but I was mostly exploring just one kingdom most of the time.

Power level 7 is the highest for my kingdoms. I’m level 1,108 as of now. Happy I got this fool, since it’s hiding for most folks. Since I’ve been exploring the entire time I’ve been playing this game, I came across the mimic about x2, and the hoard mimic x1, this was my 3rd encounter for the mimic and my 2nd for the hoard mimic.

I must mention though, before the 2 weeks (about 2 weeks) of exploring, I wasn’t exploring much. So with that being said, grind for the hoard mimc

Note: This kingdom didn’t have a Lantern at the time.

I have only fought a hoard mimic once Needless to say, I have not got the troop yet…

@foxdvd In PvP I see those teams with 3 and 4 Hoard Mimics, and think to myself: “I just asked for one all these years.”

I wonder if they have nerfed the Hoard Mimic drop chance, if they have done that, I am 100 % confidence they did this to frustrate their players. There is no other reasons.

At this point I think the most disappointing part of this is the lack of interest from the players that already have the troop. They start a thread on dragon eggs with thousands of views and get a response from the team because they are getting dupes…but an equally unfair system that no longer punishes them gets ignored.

Let me me clear…the dragon troops and the hoard troop are all unfair systems. It’s disappointing more people who got lucky won’t drop support on a change to the system.

For the Dragonite debacle, the dungeon luck disaster needs to be gone. For the hoard mimc that keeps playing hide and go seek, I feel a battle between it should show up every + battles, giving the player a chance of getting it just like they would get repeats of Cedric in the vaults. I’m saying if we can get Cedric after not needing him, we can get the hoard mimic to show up often as well.

I’m all for changing/improving the Hoard Mimic experience, though I can’t keep posting it in every single Hoard Mimic topic that shows up.

Instead of expecting the small group of people that do have the troop to pipe up (since it really isn’t that many people in all of Gems of War), there should be more expectations from the larger majority that don’t have it to speak up.

There’s many that consider Hoard Mimic a low priority, love working towards things no matter how silly the system is, thinks of it as a worthless trophy troop that’s meaningless to own so why bother, think other things need improvements first despite each individual change being mutually exclusive and not a hinderance to other fixes, etc.

Between them and the fact its not monetized makes it a really uphill battle to get it adjusted, somehow. Shouldn’t be, but is.

The other thing is the token multiplier for medals that are in the mimic battles.

Medals are still somewhat long to grind for and are monetized pretty heavily. The chase is continuous with each new troop. Having 2 hoard mimics, i look forward to the mimic fights specifically for the extra tokens.

The main reason i don’t see this as a low priority as this troop is a symptom of the poor execution of new troops gained outside of chests.

Whether it be the dragons or the hoard mimic, it’s better to have a guranteed soulforge recipe like Zuul as even vault battles aren’t safe with an unclear window of when new troops are added.

These gimmick means for getting troops make them feel less special and all the more frustrating for those without them.

Well, now I have fought it twice and still no hoard mimic troop…