That’s (likely) a feature, not a bug. Every defense win is an offense loss. You think the forums are bad today with complaints about RNG/skyfall/etc, let’s see that defense win rate reach 50%

I thought of that after I posted, haha. Definitely a problem if we have a team the CPU can win something like 65% with.

It just makes for a weird scenario with GW defense. The “best” teams are the ones with high-variance overpowering moves. Those are also the most frustrating to face, because when they hit their lucky strike there’s no counter.

Rofl. Rickys comedy strikes again. Next he will be popping a gag saying this time next year his guild won’t have been significantly overtaken. Maybe those defs that only “you” invent will save the day

How many times have you won guild wars? Less than I have fingers on one hand.

Please continue this discussion in the new ‘Xbox Drama’ Category 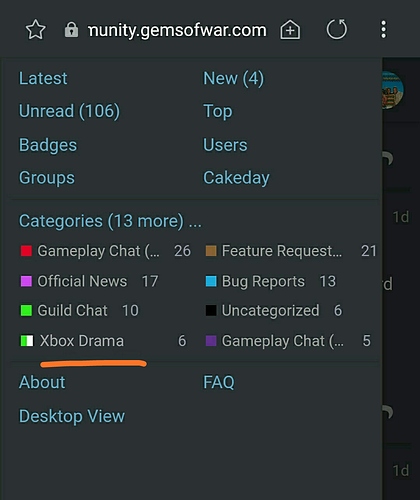 I won 15 times today and 15 yesterday and 15 the day before that with no loses but who is counting. Crap you were talking to the other guy lol.

How many accounts do you play Guild Wars on?

Not you silly, how many times your guild get the 1500 gems? No more than three I bet.

Me personally…I haven’t. I fail to see the connection between that and the glaringly obvious fact that you will be crushed under the wheels of the unforgiven trophy express train in due course, regardless of how many of their departees you recruit. Choo choo

70,000 gems is what winning guild wars 47 times gets you. But you guys don’t even come close anymore.

Isn’t all that “mine-is-bigger-than-yours fight” a little OT?

I don’t know who you are responding to…but you clearly have no idea what guild I am in. I continue however to see the obvious. Certain guilds are masters of exploitation and have no moral conscience regarding repeated abuse to “appear” victorious; with a hefty whiff of narcissistic hubris and bragging on the side. Many see right through it and despair at the mockery on show. I find it titillating how desperate people can be. Keep up the good work and the comedy.

Pull up, thread, pull up!

Priceless. Obviously you have the entire server monitored so that you can state with conviction that it was always your invention.

Priceless. Obviously you have the entire server monitored so that you can state with conviction that it was always your invention

Well when you do lot of pvp you play against same people over and over so yeah it’s easy to notice when they change team. Maybe you can say it’s coincidence but when it happen 4-5x i think it’s intentional.

Of course you have no idea what im talking about. You too busy to suck their ass

“Too busy to suck their ass!”

Not quite sure what that means but I do know that you don’t do a lot of pvp, unless ur a casual player. So more unfounded claims from the comedy legend. We all come up with teams that work or don’t work. Trying to take credit for the best defs is hilarious…a sad indication of how underachieving your “real life” is. Chins up, Ricky…

Anyway instead of watching other guilds, if i was you i would check my guildmate and tell them to not abuse a gem bugs so they won’t get banned…