Add a button ‘open 200 chests’ for glory buys as well

There was another post for this but Idk if the devs would even do this since we already have open 100 chests.

For buying chests with Glory the biggest option is 50. I’d love to see a 200 option. 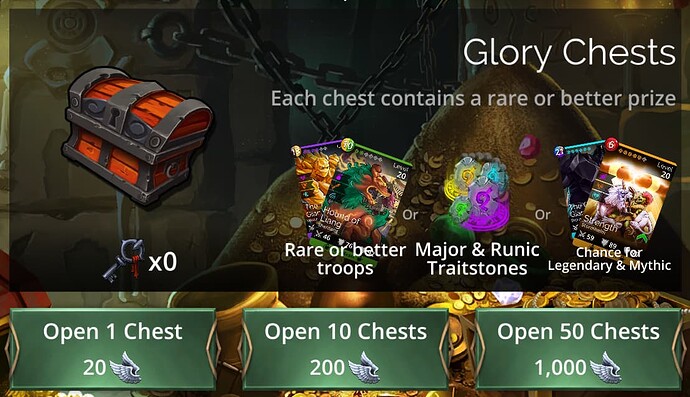 Isn’t this standard across ALL chest types?

The “open 200 chests” option only appears if you have over 200 keys – if you are purchasing them with currency the maximum is always 50.

True but I normally get about 300 keys after reset plus I know people with like 2k keys maybe for people over level 900 should have a auto open button where it can open your chests automatically and you can spend the amount you want with this.

This is one of my biggest gripes with this game. I have, right now, 2.6 million glory. I would like to spend a few hundred thousand of it to open chests and get some more hellcrag troops, but I can’t be arsed to sit there clicking “Open 50 chests” for 6 hours. I get that they might have server concerns or something, but when we can already open 200 at a time if we have the keys, I don’t get why we can’t AT LEAST open 200 when spending currency.

Also there are times when I want to spend just a few keys, for example, to get a new legendary from event chests. Maybe 10 at a time. But because I have a pile of event keys, my only options are 1, 50, 200. The UI for this is awful.

There is a pool of available troops per “opening”.

Incorrect. Yes there is a fixed drop table but lacking further information about how it is generated serverside, we have no reason to assume that the drop table should ever “run out” regardless of how many chests per batch you open.

This post was flagged by the community and is temporarily hidden.

Do you even read what you are writing?

1 - Completely irrelevant to your argument.

2 - The Mythic drop rate from Glory Chests is stated to be 0.01% (1/10,000) and the maximum number of chests we can open at once is 200, which averages a 2% “drop rate” per batch of 200. The chance of getting two Mythic drops from any 200 Glory chests is therefore 0.04%, now divide this by the size of the available Mythic pool and you’re approaching rarities that are difficult to find even among thousands of players. So given this should be expected by default, how is it even relevant to your argument?

3 - That’s is a patently absurd example of … something that doesn’t even feel relevant to your argument to begin with? But to be fair, streaks are easily calculated by the desired drop rate exponentiated by streak length. And to make this easier let’s analyze a much easier drop table: weekly Summoning Stones. Each Troop has an apparently equal chance of dropping (proof), so if you craft even 10 of a given Summoning Stone, your chance of getting the same troop every time is 1/(8^10) or about 1 in a billion. Again, why are you providing such a patently absurd example and what makes you think it supports your claim?

This post was flagged by the community and is temporarily hidden.

Whatever you two are arguing about isn’t even relevant to this topic, right?

The reasoning given by the devs (I’m too lazy to try and find the post) is that it would strain the servers to open a lot at once. I wonder if allowing us to do multiple openings in a row would be possible? Like, you tell the game to open 200 chests 10 times in a row.

I think in this case it’s probably more that Glory as
a resource was scarcer when the options were set. They may not have seen a need for anything larger, or figured they could cross that bridge when they got there (oops). So it may just need an update based on a resource threshold, i.e. once you have 40k+ or 80k+ Glory (or some other number), your options switch to 1 Chest, 50 Chests (1k Glory), 200 Chests (4k Glory).

Glory Keys themselves were probably able to follow the rules set for Gold Keys (as a general set of Key opening options).

For future-proofing/bringing it up to inflation and better gaming standards, they could include a custom amount text box entry/sliding scale, as has been suggested many a time.

And yeah, a simple disclaimer text for opening amounts larger than the max would resolve that, at least for the UI:

“Note: Amounts greater than 200 will be opened sequentially in lots of 200. This may take some time.”

You may click the red cross to halt this process at any time and view your opened Chest rewards.

I think in this case it’s probably more that Glory as
a resource was scarcer when the options were set.

It’s also kind of ironic that the intended means of acquiring Glory (PVP battles) is literally the slowest method over time of collecting it.

Seen this argument before and it does make some sense – it all gets processed (to completion) on the serverside before you get informed of the results. Opening 200 chests means 200 updates to your row in the relevant database table(s) plus whatever ripple effects that might impose on other database tables elsewhere on the server. All while the game client is left waiting for a response…

I have removed some comments that were getting off-topic and breaching our Community Guidelines. All for having a discussion as long as it is kept civil and within the thread’s discussion.