It shouldn’t be there to begin with; I shouldn’t have to curse it first.

I stopped using LD in wars because it stopped getting wins. I guess I’m playing different people. There is way harder stuff out there than that

If we get rid of everything that is annoying then I will go 30/0 every warS without any thinking. I want annoying and hard to beat stuff. If it’s hard for me then it will be hard for others trying to beat my Def. PVP I could card less. Go to explore.

Everything and anything CAN be beat.
The hoops necessary to jump through to beat it is what shows how unbalanced it is.
My level 20 troops can beat a team of level 500 troops.
Clearly that doesn’t mean that it’s balanced in a normal competitive environment such as PvP or GW.

– A bunch of minor technical bugs, including a treasure hunt bug.

– New Adventure Tasks: Added support for “Special Adventure Tasks” (final name to be determined); replaces one of the daily adventures, higher rewards than normal. Planned to be used for special events and holidays.

– Holiday art is removed until next year. /shockedpikachuface

– When leveling up, the player’s level number is shown on the Mana Mastery upgrade screen.

– When clicking on a faction in the Underworld, clicking on the help “?” on the main menu for the faction will generate a pop-up with the faction’s pet and banner.

– After looking at a player’s roster in the Guild Roster menu, the menu no longer resets to the top of the guild roster.

– Werewoods faction is linked to [EDIT 1/16]: Urskaya.
– No plans (likely ever) for a rotation of cosmetic pets on Saturday cosmetic pet events in the future.
– The weekly event rotation will be changing to… something… when 5.0 releases.
– A bunch of under-the-hood stuff to prep for the next update, 4.8.
– Treasure map update in second half of 2020 (Q3 or Q4). Nothing even remotely set in stone otherwise that there will be some kind of revamp yet.

– The weekly event rotation will be changing to… something… when 5.0 releases. 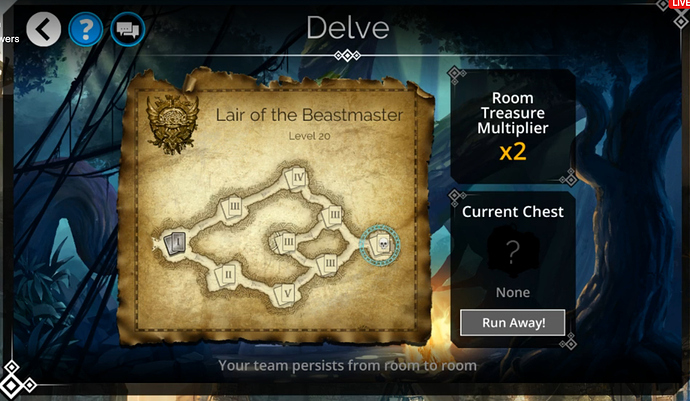 Looking like it. With 4.8.0 being the next update, 5.0.0 is looking like June or July-ish, which is pretty much where Sirrian conjectured it would be back on the last dev Q&A.

Does this mean an additional weekly event will be added on top of guild wars, towers, tower of doom, raid as well?

Does this mean an additional weekly event will be added on top of guild wars, towers, tower of doom, raid as well?

Salty said she was not authorized to discuss any of the future scheduling changes. Something as large as a major version update is going to be presented by Nimhain and Sirran on a Dev Q&A stream well before Salty gets authorization to talk about it on one of her weekly streams.

Although, based on how she presented this information on-stream, I think it’s pretty safe to assert that 5.0.0 is close enough now (2 updates away) that some basic form of the update has been settled upon internally and is out of the whitepaper stage, with coding started on it.

Will there be a Druid or a Salty Class?

How about more uses for treasure maps?
Should we feed them to Salty until she comes up with more uses?
You know I like that idea.
I only have 5 mill treasure maps.
I hope you eat a lot.

One can only speculate at this point. But considering invasions are soon getting to the point where every troop type has a siegebreaker and a few months later, every kingdom will have a godslayer, I suspect those two events are on their way out. No doubt to be replaced with new and improved gem sinks

I’m not complaining, I’m excited for what’s coming. And they need to make a living too. It’s just a bit too “in your face” sometimes.

From what I remember from last Dev Q&A I watched, Aprilish is when a new monthly event will happen due to no new classes being released.

How’s that? We all saw new troops, they belong to “Werewoods/Urskaya”. Will it be changed at the very last moment? And I’d like to remind that Maugrim Woods’ faction is Hell Gate (very probably, of course, “not set in stone”).

I dont even know which one is right anymore

I’ve come away from that thinking consistency isn’t Gems of War’s strong suit… =/
The inconsistent list might be due for another tally. Welcome Werewoods, I guess.

How’s that? We all saw new troops, they belong to “Werewoods/Urskaya”. Will it be changed at the very last moment? And I’d like to remind that Maugrim Woods’ faction is (very probably, of course, “not set in stone”).

I dont even know which one is right anymore

It was stated on-stream that the current link to Urskaya is incorrect. So yeah, it would have to be fixed before the faction goes live on Friday to change the link to Maugrim Woods.

What do you have against Brown....Kingdoms?

Please be aware that our schedule is not set in stone, and often changes. Anything in Taransworld is subject to change.

Game data is not “official” until that game data actually hits the live production servers. That really shouldn’t surprise anyone here.