Welcome my Elder Scrolls brethren and sistren! I’d like to call upon the might of the Gems of War Forum’s Skyrim fans and see what fun playthrough methods or builds you’ve mustered up throughout the years whilst playing this amazing game!

I’ve played this game since it’s release, and I’ve put in well over a thousand or more hours across Xbox 360, Xbox One, PS4 (Normal AND VR), as well as PC. If you can’t tell, this game brings me a slight amount of enjoyment.

I’ve played the classic Completionist character, though it gets pretty boring once you get so strong, so I’ve found myself throughout the years splitting up the game into manageable, very fun and separate characters to do different questlines, etc. So, I’m welcome to ANY build idea, even the one about the Khajiit Caravaneer who is restricted to following the Khajiit Caravans and can only associate with nearby dungeons and towns.

PLEASE NO SPOILERS! You think I’m kidding as a man who’s put over a thousand hours into this game, but I have yet to beat the main story, the companions, the civil war conflict, the Dark Brotherhood, Dawnguard, or Solstheim… so, in case anyone ELSE has also not partaken of these or any other aspects of the game, let’s just leave the ideas vague or include spoiler warnings please!

I’ve played many characters and playstyles, but here are some that I can remember off the top of my head:

Arcemius, you seem to be playing the game many of the ways I was!

Having a character fully devoted to one fighting style or honor code really makes you play to your strengths. It changes how the whole game goes. No crime is by far the toughest I think.

I’m out of likes at the moment, so once I get my like-check, I’ll be sure to pay you!

But, NO CRIME?! Blasphemy! But, that’s how my Honrobound Nord was going to be played, and I agree that it is SO hard. Especially since I’m a kleptomaniac and I tend to make all of my characters thieves to some extent.

Bow only is fun for me, but it gets REALLY boring near the end, as things just die in one shot. Late game Bows put the DEATH in Draugr Deathlord.

It is really fun though to play characters that are restricted by some form of code. Philosophically, it sort of speaks to me. My thief that was supposed to clear as much as he could without killing anyone unless absolutely necessary was tough. I found myself questioning myself at every turn, having to stop myself from killing people. All the while I’m just thinking, “Geez! Am I really THAT blood-thirsty? Can’t I simply NOT kill these people?” It’s not like I had to kill them to get their gear either, because my thief had level 100 pickpocketing, so I just stole all of their equipped weapons and gear!

Can I suggest a fun playthrough would be finishing the main quests?

Why didn’t I think of that?!

I plan on it. That was going to be my next character. In fact, I planned on doing so a long time ago, but for whatever reason I got side tracked and never got around to it.

On another note, I think I haven’t beaten it yet for the same reason I never like to finish a good TV series, or a good graphic novel. Once I beat the main story, I feel like it’ll steal away some of that unknown excitement I get while playing the game so much. Eventually, I plan on beating it, but until then, I feel like I’ve always got something to look forward to doing no matter how much I play the game!

It’s not like I had to kill them to get their gear either, because my thief had level 100 pickpocketing, so I just stole all of their equipped weapons and gear!

I’ve played at least 1000 hours into Morrowind, Oblivion and Skyrim individually and I still have never leveled pickpocketing. I’m guessing I’ve pickpocketed 30 items total across all three games. I’ll steal everything in sight, but nothing in pocket. It stresses me out too much when they catch me.

No Crime Oblivion was a heartbreak. There is a point in the main storyline where you go fetch a tome from Necromancers in a cave. The game counts it as theft.

Sadly, I never had the chance to play Morrowind, aside from a 10 minute excerpt on a shoddy-level laptop.

BUT, don’t get me started on Oblivion! Amazing game! If the graphics were caught up, and the game polished a bit more like Skyrim, it would be better than Skyrim in every way! I too played that game for about the same time you said you did, but I don’t quite remember the pickpocketing mechanic in it.

Pickpocketing is so much fun - lot’s of great stuff to purloin off of unsuspecting victims. Just save it right before you begin the pickpocketing and steal a few things successfully, back out, save again, and repeat until you’ve acquired all of the things you desire. Eventually, you’ll be taking entire inventories without batting an eye. It’s also so easy to level. With my current character, I’ve Ledendary’d it twice, so lots of free levels and perks. Just enchant a set of gear to enhance pickpocketing before you reset the stat.

I’m currently on a mod frenzy

Yeah, obviously the PC has the best Mod support/capabilities, but the Xbox One version is a close second. I’ve not followed up to check, but while reading articles for my Playthrough Idea research I read some things leading me to believe there might even be explicit mods available for Xbox, but I don’t really like to get on my Xbox One. But, back to the topic at hand, the PS4 has… “okay” mods. I’ve just been playing without them so I can get Trophies - not that there was anything I was crazy about downloading anyways.

I AM glad that they added that new Creator Club. You should check it out, it’s like “official” DLC made and submitted by fans, and picked by Devs to release.

Hope you dont let me down when Fallout 76 comes out

Of course not! Still waiting for Black Friday sales right?

I definitely have to see it before I am onboard.

Just kidding, I will buy it regardless as soon as possible.

From what I’ve seen, I really like it. Sadly, there’s not any gameplay out at the moment, but the explanation of how the game works so far seems pretty cool. I already know it’s not going to be the same experience as the Fallout or Elder Scrolls games, but it does look to be an exciting, NEW experience that I’m looking forward to. I keep getting warned by people I know to not get my hopes up, but I’d rather be excited and then let down rather than be let down the whole time regardless.

I want to start a new hero on Skyrim (my first one is a classic warrior, no particular skills)
For you, which is the build that has the best “difficulty to use / power” balance?
I’d like to build a new character that can follow the road “well, just do this and you can run through all the game without thinking too much about strategy because you are just too overpowered”

My current dilemma with my character I’m playing right now is that he’s FAAAAARRR to overpowered. Like, holy crap! I had to bump my game up to Legendary difficulty just to pretend that the game is a challenge. I can tell you this much, if you play a character that is overpowered between the levels of 1 - 25, you will NOT enjoy yourself later on.

I like the fact the servers will be divided into small groups, so when you enter the game there wont be another 100 people in that session, so would be a more realistic post-apocalyptic vision.
I really hope you wont go to far and wait for my character @Arcemius

you need to pull my weight

NO NO! We’re going in together, LOL! I’m a stickler for saving money! You already sold me on waiting for Black Firday deals.

I hope it appears on BF with a 20% off at least, that would be awesome.
Also i will clear out the nuclear dust from my Vault-Tec HeadPhones to do in-game chat 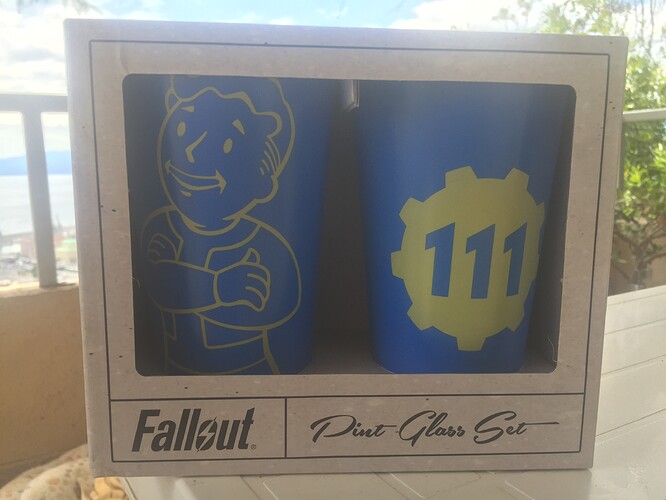 Did i show you this? My wife got them for me