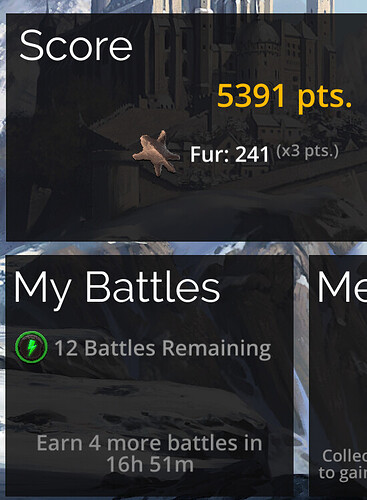 image550×749 91 KB
As @mitamata pointed out that score above is the whole guild score. Wish I know why is that there!

Here is my personal score, still a piece of cake!

If I would spend all my sigils right now I would end up around 2k personal score, on Monday!

No no all is working as intended.
All is true random/equal chance until detectable patterns are discovered…

I don’t like it too. Hard to determine how many battles we need to get the minimum score.

The score in your screenshot is for your entire guild this week. Check your guild’s leaderboard for your individual score.

OMG you are right, but why is the whole guild score is shown on that page, doesn’t make sense.

If you are fortunate enough to be in a high rank guild then almost every event is irrelevant because the rewards offered have not been updated to make them relevant. We have objected to event overload but many of us have no reason to engage. So don’t. Make them offer something (unlike daily offers) that is worth gem or other investment.

I currently see nothing in this game that is worth a single gem.

why is the whole guild score is shown on that page, doesn’t make sense.

I guess this is how they designed it to show when it’s an event with a guild leaderboard (instead of individual leaderboard). So you know the score that goes on the leaderboard?

I don’t know, it is kind of odd.
We’ve never had a guild leaderboard for a world event before, so we never got to see it in action. My guess is this one is like that by mistake.

It could be by mistake. It could be to make the bots which calculate how many tiers are needed fail. Could be for any reason.

No no no, as we learned from dungeons, the correct complaint format is:

WOW! Players are benefiting from a HUGE bug in this week’s event. It’s super EASY to get all the rewards this time. Thanks DEVS!

Thats why no bugs benefitting the company should ever be reported again.

Just chasing this up this morning, the Fight screen map score should be displaying your individual score but as you have discovered currently it is displaying your Guild total.

The team is working on a fix for this.

1 Like
All the Rage
[Not a bug] World event switched from guild leaderboard to individual leaderboard
gow October 4, 2022, 2:09am #14

Looks like it has been resolved. Now the leaderboard shows personal scores

All of the players that spent gems for sigils to play a “guild” leaderboard should be reimbursed for thinking this is a fun event for the whole guild. Only GoW can take everyone to Disney Land, and make them only ride “its a small world”.

I guess World Events are so old that the current dev team has forgotten Guild World Events were actually part of the promised features of the flexibility of World Events. I feel bad for the people that spent heavy on it. yikes.

4.8 UPDATE [image][image] With Invasion and Raid Bosses reaching a point where all Kingdoms and Troop Types have had a turn, we’ve looked to what’s next for Live Events and how will this affect Gems of War going forward. We have implemented a new Event system that will slowly replace the existing events (except for Guild Wars), and that will allow us to expand on the Krystara story in a new way. This new system has been designed to allow us more flexibility in how we create and run events, so…

The scoring! Oh my God they promised so much and delivered so little.

Why can’t we have guild leaderboards sometimes?

If the goal of the devs is to reduce peoples gem stashes then that is the easiest way. I don’t care for my own score but I’d help the guild get into the leaderboard every time it was applicable.
I’m sure there would be others and then I’m sure it would more competitive so more gems spent.

I’m glad I held off yesterday as I just can’t trust things to be left alone now. But a lot of people were excited and spent their gems only to have the rug pulled.
I did make a topic on this 15minutes after reset but deleted it to avoid this scenario.

Not to mention that the original post in this thread was referring to the imbalance of scoring, last week was a very expensive event and this week the OP finished the minimum score before using all sigils. OP is asking for consistency.
But CX team change leaderboard and mark as [fixed] without even reading the post

it’s Legendary Trait is the conflicts

Always thought this was ridiculous

Wait… It isn’t a team event? I spent extra gems on this thinking the Guild was working together on this one…

And whatever happened to this…?

Scoring: New events will have new ways of scoring. They may score off of items dropped by your enemies, specific troops or troop types killed, colored gems matched, or even 4-or-5’s of-a-kind that you match; every event will be different. And will clearly explain the scoring method.

“and will clearly explain the scoring method”