[Fixed in 4.2.5] Sudden game crash during startup or loading on Steam client - 2

Screenshot or image:
None.

What happened?
Game crash log was generated outside the game, I could still play it, but once I selected the Yes option, the game closed to finalize the issue, probably creating a log in full.

How often does this happen? When did it begin happening?
It’s actually quite common since 4.2.0.07 Update. There must be some stability issues.

Steps to make it happen again
Start the game on Steam client. (no special settings)
Hope that you get unlucky/lucky enough to get such a notification?

Support ticket ID: #69099
All the necessary details are included there.

Very similar (if not the same) issue that already happened once before:

Platform, device version and operating system: PC, Steam client, Game: 4.2.0.07, OS: Win 7x64 Screenshot or image: None provided. What you were expecting to happen, and what actually happened: The game crashed as soon as it started loading. It generated the files. Steam verification 100% passed. No issues. How often does this happen? When did it begin happening? Very rarely. But it happened today, after 4.2 update got released? Stability issues? Files: (not allowed to upload) the files …

So you clicked the play button inside Steam?
You didn’t use any shortcuts or any other way to get into the game?

Yes, always inside Steam.
I never used any shortcuts.
Steam window is not resized. if it’s maxed, the game will always lunch not in full screen, but minimized.

@Kafka
Also, before 4.2.0.07 Update, there was never short hangout, like 3-5 seconds, where the Steam notification freezes or delays a bit, at least until the loading bar comes.
I am not sure if this issue is somehow related or not.

I have submitted a new ticket about the same issue.
I provided more details and more fresh logs.

I felt that there is no other option, since the game crashes started happening more often, like 3 out of 10 times a day.

To mention this as well. I recently get more of this: (I tested my connection and I found no issues on my side.) 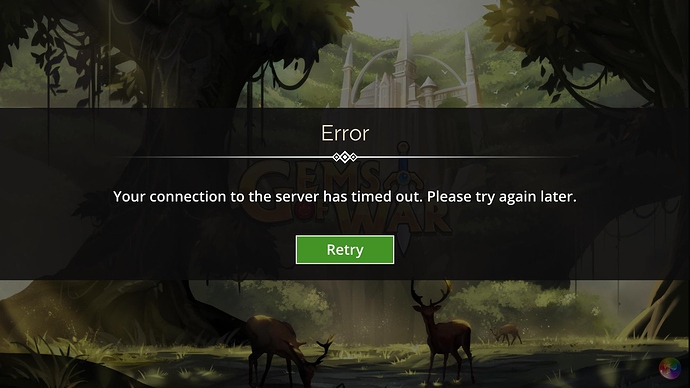 since some days I get exactly the same errormessage. But it’s just in the loadingscreen and if you click retry, it always works then. So no crashes or other harm done.

It’s on Steam AND on mobile device here.

Hey, I replied to your support ticket.

This is caused by the active window switching while starting the game up.