These ‘Visual Updates’ - are definitely not upgrades. Removing the visual ‘character’ from the game is not an upgrade, it’s definitely a downgrade. The menu bars along the top look totally unfinished. Like absolutely NO effort to make it look good has been considered or included - how do you call this an ‘upgrade’ in any way? There is no character anymore. It’s base code, unedited. “Put a box in at the top of the screen with these words in it.” That’s it.

The removal of colour is the removal of life.
Instead of feeling somewhat happy about a level up, or even a kingdom gold collection, the new button colour is dead and lifeless, it mutes / dulls the feeling. ANY feeling.
It increases the amount of monotony already present in the game.
The style of the buttons is an improvement, but the colour is so dead that I can’t be happy about anything I am clicking on now. The sound effect that plays in my head when I click one of these is “Bleh.”
Clicking these buttons makes me feel dead inside. Depressed. And we are to expect more of the same dullification over the next 12 months?

Maybe it is time for me to move on. It hurts to see a game that you used to love be twisted into something that you just don’t like looking at anymore. A part of my daily life and routine for years, now feels dead whenever I have to click a button. Why start a game up if it makes me feel bad?

I have a lot to consider, but - I have to say that I am deeply saddened by these downgrades in graphics.

Yep – the color is so dark and dreary.

Shading, bevels, and some flair were added, and all the bright colors were drained. It makes me sad.

To be fair, the autumn 2017 graphics downgrade (that was never reversed either) was worse. Before that, the game looked much better. 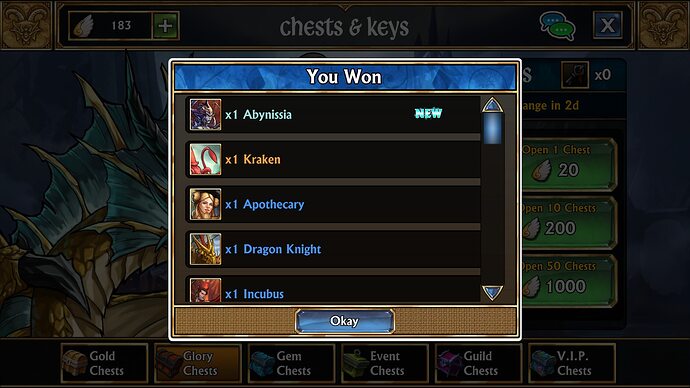 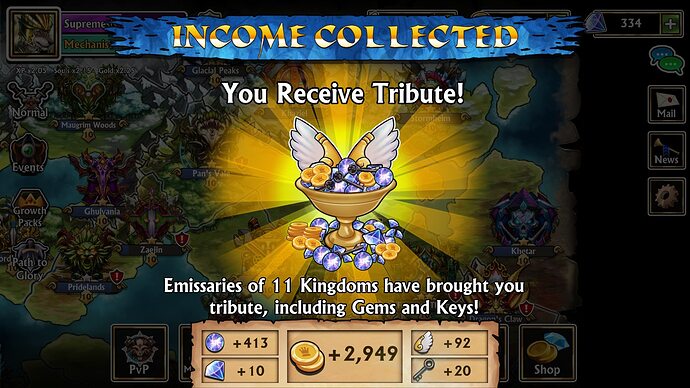 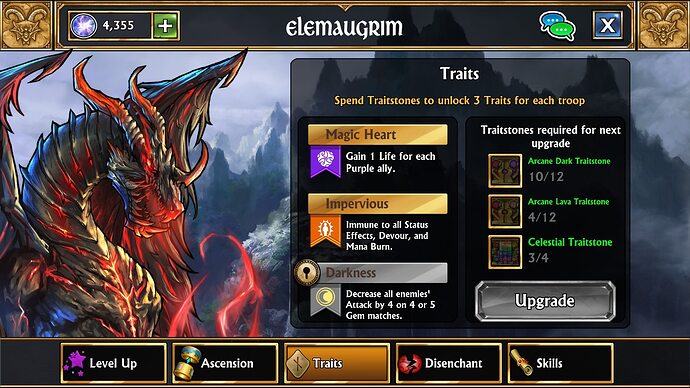 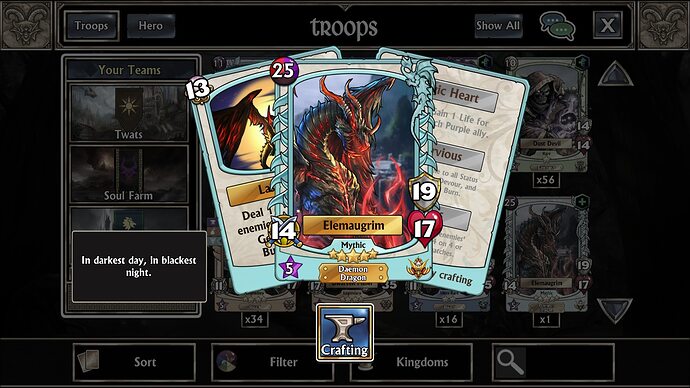 1920×1080 415 KB
And ofcourse can never forget how good the design of the troops card looked, with everything in colour just ahhh.
But anyway topic wise it’s a nice little touch to make the buttons stand out I don’t really see it as much as an issue? Being filled in with a certain lighter green I like it. I’m sure more awaits us though.
23 Likes
Jerog July 13, 2022, 5:41pm #5

Oldtime screenshots. Awesome. Looked even better than I remembered. Damn, I miss that.

P.S.: If I don’t misremember, graphics were saved as actual graphic files then, and not as unity assets.

P.P.S.: From what I recall, the feedback about the switch from the graphics up there to the current model was so devastating, that even Kafka admitted, it is a step back.

The sound effect that plays in my head when I click one of these is “Bleh.”

This made me smile

New graphics are nice, but very dreary and drab, it’s so depressing to play now, nothing bright and cheery. It’s just about a game breaker at this point for me, and I have been playing since Oct '15 and I’m VIP rank 15 if it matters.

So now we want it all colorful and pretty? Can’t please everyone.

Hey everyone, just jumping in to discuss some of the issues regarding the newly added particle effects. While we believe that our new particles are in line with other games in this and similar genres, we can appreciate that the change from a game with minimal visual effects to one that is much more modern and rich has reportedly caused a few problems for some players. It is one of our aims at Gems of War to make our game accessible to a wide range of players, and we will be looking into the part…

I’ve been playing for 3 years now. I like and even love some of the changes made. Of the changes i dont like, only 1 annoys me to no end. The status effects flashy lights. There are several reasons. Im sensative to flashing lights, it makes me nauseous. I’m also colorblind. So flashing changing lights are hard to decipher. I really cant remember all of the meanings for all the colors. Solution suggestion: please give an option to turn them off and get the little icons like before, or at …

I like the upgrade in visuals, yes the green could be brighter but overall i like the new visuals

Yes, I remember these graphics. They were great! It’s what brought me to the game, and fit the game so nicely in its genre. I was so sad when they changed these too, and left for a while because of it too.
I came back because… at least it still had some colour.
I guess I’ve been clinging onto the only colour we had left more than I knew, because now that it is gone too, it feels dead.
In the same way that a healthy plant is a nice healthy bright green - when it wilts and dies it loses its colour vibrancy.

It’s just another step in the same direction they took all those years ago, killing the fun atmosphere of the game. I really shouldn’t be surprised, I am just sad that it’s happened. Again.

Yes, I’ve been playing since… before Kerberos was released. I remember them releasing troops being a big deal, but I never really watched a stream until Kerberos, and I was so disappointed when I spent all my keys at the time and wasn’t able to draw him yet… but I got him eventually. He made for a fun team.

Yeah I kinda like the new buttons - they are out of place with the rest of the UI but I presume that’ll be updated over time.

The previous screenshots are an abomination to the visual cortex - sorry if you fondly remember them.

I agree so much lorien. The old visuals in the screenshots look…horrible, too bright colors and very busy

Just get the old green and you can keep the new flair.

Yep, like I said, the new style for the buttons is an improvement, but the loss of colour is terribly sad.

I very much preferred and still prefer the old design posted up there. Looks like much more effort went into it; more small details; more individual flair.
Just putting the old and the new chat button next to each other is an example of a downgrade in my eyes, and the same goes for the rest.

If I had been asked with current and old screenies side by side, which one is the up to date version, and which the early beta, I would not have named the one with the bland monocoloured outlines as the latest and greatest.

Did it look like a mid-90s Commodore Amiga game? Sure. Loved that computer. Still better than some mobile touch screen stuff.

I like it for the most part, maybe there should be a frame around the words but other than that i think its a good look

I think the new UI is fine. I just wished they had a border around active menu tabs.

They have been doing little UI tweaks along with a lot of the content so I also assume it will fit better with the future updates as they continually tweak the UI. We can’t see everything in detail they have planned and I expect the buttons were made with some bigger picture in mind. I do like the Details added the tabs still feel unfinished but the style of the buttons is nice it could use a bit more colour though as i agree it looks a little too muted. The title banner at the top of the tabs I do think does look nice as well.

Oldtime screenshots. Awesome. Looked even better than I remembered. Damn, I miss that.

Those shots are from my break period, so neat to see. I was part of the player base that was upset they introduced “ascending” using multiple copies of troops… after we were already disenchanting troops.

Also, I remember the PVP sucked back then because you would have to win enough times in a row… verses teams made entirely of “The Great Maw”.

I remember it wasn’t an awful game, just limited and time consuming (lol…), so I put it on the backburner and moved on to other games.
(And by that, I definitely mean I parked my butt in a guild and kept collecting stuff once a day… lol thanks to that guild!)

I have some old ones from 2015 I can share. I came back fully in 2018 because I actually liked the newer style. 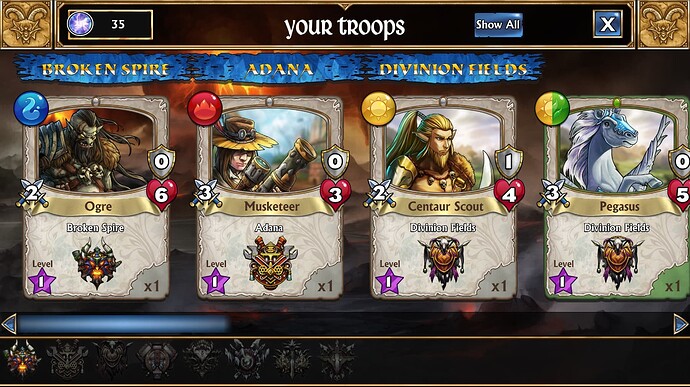 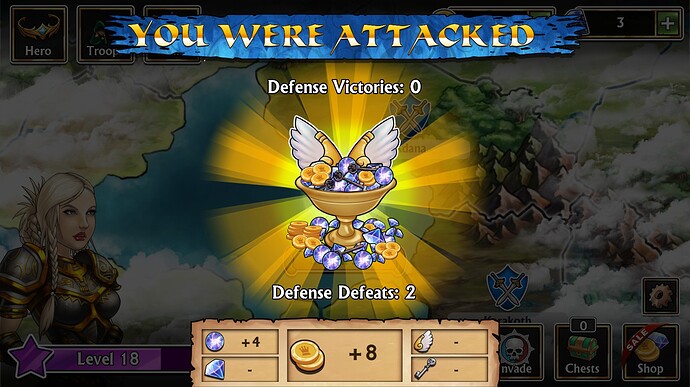 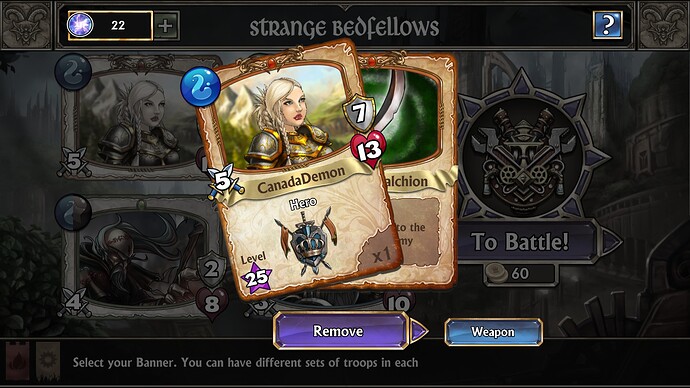 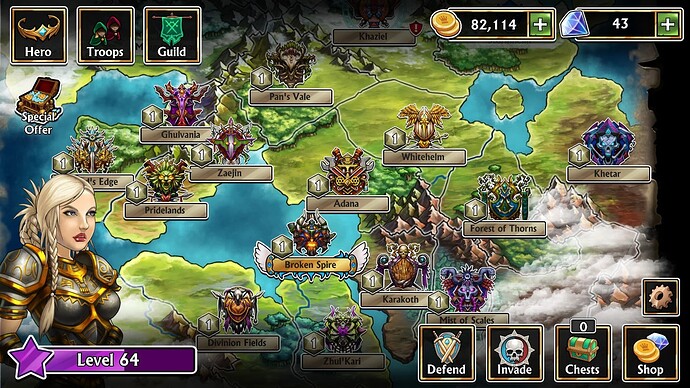