I have seen a post here in the forums, spoken to guild members and at least 10 friends who play this game and the dragon egg drop is indeed BUGGED for at least 15 people that I have spoken to…

Please @Jeto , @Kafka and @OminousGMan … Give us some feedback or at least acknowledge the issue.

Emeraldrin was my first dragon.

The dragons, I got from opening 3 dragon eggs so far, were:

You definitely did not speak to enough people.

Have more Garnetearlin than any other dragon.

We’re working with a very small data set right now. I recorded over 150 community drops and it seemed somewhat evenly distributed. I haven’t updated it in ages though.

It’s very easy to get frustrated by inconsistent drops, and that’s fine. But as far as I’m aware, there is no collection of data points larger than the sample I collected in the linked thread (if someone has a larger collection I’d love to see it though!). The data does not reveal any notable inconsistency. RNG can be rough

If someone wants to continue my chart, go for it. It got messy to track in the thread.

i do think its just crappy RnG.
these are my dragons

i do think its just crappy RnG.

Even that is debatable. I a clean random environment, any troop that gets a head start is more likely to keep the lead. It’s only when you bring in an artificial equalizer, that you end up with equal drop amounts in the long term.
Relative differences narrow down. Absolute differences grow. Compare 4 vs 1 dragons out of 10 to 250 vs 120 out of 1000. That’s how propability works.

sorry, i dont know how to word this without sounding agumentitive.

im not saying that the RnG is ballanced in their favor. my first 4 eggs were all diferent.

i done basic napkin math being that each dragon has roughly 16% chance and the probability of a new dragon reduces by that percentage each time a new one is pulled.

but i am in agreement from previous post here. dragonite should not cost 300 gems for just 60 and the perfect runs should not be so hard to get.

i also understand the dragons are hard to get to make them seem “special”.

this is a guy however that belives that when you have 1 copy of anything it should be harder to pull regardless or rarity.

I say we should be able to pick the Dragon we want for our collections and that Dragonite (that resource should be renamed since you know there’s a Pokemon with that name that’s been around a good bit longer than RNG the Game er Gems of War has been.) should be awarded per boss fight in the same increments as Diamonds and that we get a big helping of it for perfect dungeon runs.

Honestly the Dragons being “special” is just another way of saying we would have “PrIdE aNd AcCoMpLiShMeNt!” aka the EA excuse for excessive grinding. 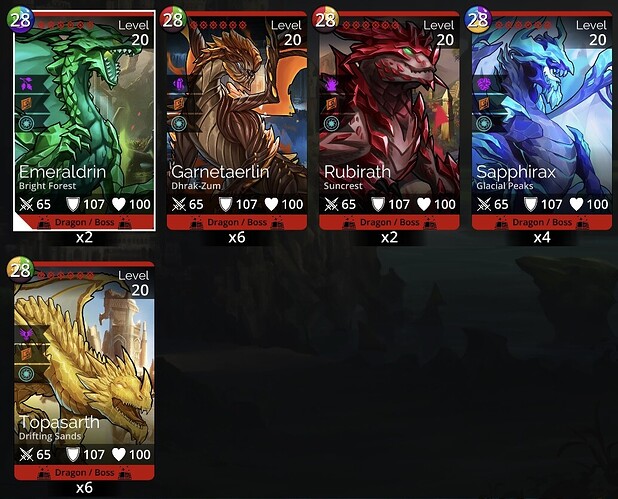 While others had Rubirath very early on, that was the last I got.

I think I got green, brown, yellow, purple, blue, red in that order, not counting dupes.
Not 100% sure if it was p/b or b/p but sure about the others.

I’ve moved this thread to feedback so it doesn’t get lost (it was in the “uncategorised” list) - I also changed the title. Please don’t write to support about this. We can’t do anything with support tickets that have feedback in them other than what we are already doing on the forum - which is passing the feedback on. But the added downside to receiving feedback support tickets is that they take time away from helping players with account and technical issues.

I hear ya out here loud and clear.
I have given the feedback, I’ve been told it’s not bugged.
I also tested this again yesterday myself.

If you want my results:

Given I’ve been told this isn’t bugged, I will focus more on the fact it FEELS streaky and unfair and leaves a bad taste in the mouth, when I’m sharing this with the team to see if anything more can be done from that angle.

Currently the plan is to make them easier to target in some way in a future update, but I know that doesn’t leave you feeling good now, even if the RNG is working correctly.

If you got a coin with a 50/50 chance, and you get numbers on a flip, the next flip is not guaranteed to get you heads. And getting a streak of multiple same results is not only possible, but will eventually happen.
Randomness is an unintuitive feature for the human mind. That’s why many games choose to manipulate “random” results into giving out what players expect.

I still think, we are bashing our heads on the wrong part of the game the last months. Dragonite is annoying for a year or two, but will soon fade into the background.
The real problem aspect in the recent past are tarot troops. Cash exclusive for months, and then given a minimal (and still shrinking) chance to appear in a time-consuming feature requiring a very rare ressource.

I really liked this response!

If you want my results:

Raw data is always the best for analysis purposes. 17 eggs with a noticeable streak of Amethialas (twice the expected value), this really does match other screenshots posted by users.

I still wonder if there may be other factors that influence the RNG on which dragon you get. But I know it’s EXTREMELY hard to even theorize from the user side, without some massive collection of raw data to go sifting through.

For example, one idea I had is, you know how each day of the week has an associated color boss? What if you have a better chance of getting a specific color Gem Dragon based on day of week? I am not suspecting this to be actually true (again, requires massive data collection) but it is definitely the sort of thing that could (a) produce conspicuous streaks of specific Dragons while (b) actually working as designed, and (c) generally average out to an even distribution over the course of a week (especially when viewed at the grand scale of the userbase as a collective, rather than individual unhappy users).