Delves: all about rooms and plans 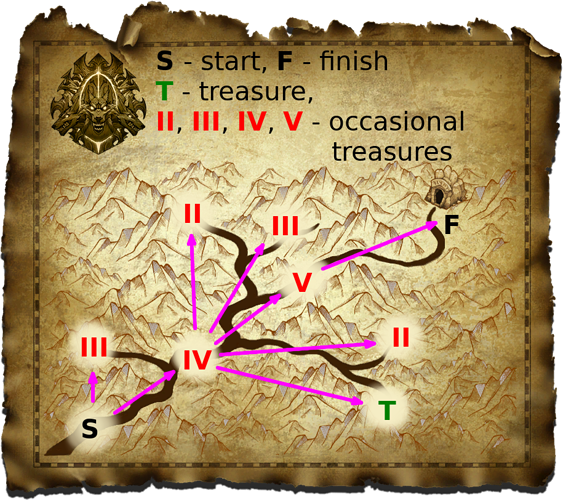 Faction title: The Gate of the Dead
Faction map name: The Gate and the River
Start room: The Gate Room
Finish room: Hall of Judgement
Faction info: On the other side of the gate once guarded by Kerberos, the Judge of the Dead awaits any would who come his way.
Added: 30th April 2021

1 room is a firm treasure, 6 others are occasional treasures. But my estimation is about 2 treasure rooms per delve. Sometimes you’ll see only 1 treasure, sometimes - 4 (I never saw 6 or 7, can’t guess what are chances of this event). The most rare treasure room is IV, I saw it as an actual treasure only in 1 of 60+ delves.

Number IV can be Dark Magus’s Secret, so I guess, occasional treasure as well.

I’ve also found a Treasure room in that hard-designated Tier IV space. (Dragon Fountain if I’m recalling correctly.) So it probably is another “occasional treasure” chamber.

Number IV can be Dark Magus’s Secret, so I guess, occasional treasure as well.

I’ve also found a Treasure room in that hard-designated Tier IV space. (Dragon Fountain if I’m recalling correctly.) So it probably is another “occasional treasure” chamber.

Okay, thanks, I fixed it, but I asked to notify me about mistakes privately. 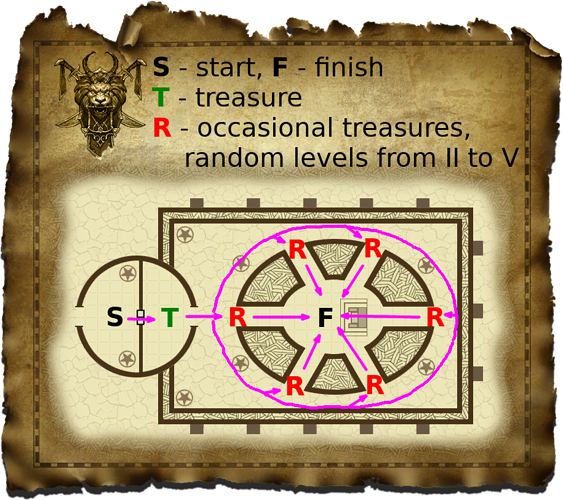 This faction is almost total chaos: 6 rooms surrounding the throne room can be anything at all: any level from 2 to 5 (no rooms level I), treasure or plain. The only rule remaining is that all rooms are different within one delve. And yes, after passing the first and second rooms (S and T), you have an access to all 6 rooms around the F room, that’s what I wanted to show with a magenta oval with arrows.

With 1 firm treasure room, the average of treasure room amount in one delve is about 2.08 (by my own observations during the faction event: 53 delves from level 20 to level 500). Maximum what I could see was 4 treasure rooms at once. (What is probability of a treasure room in such conditions? 10 treasure rooms remain among 62 possible, so for 4th treasure room it’s 10/62 * 9/61 * 8/60, or about 0.3%.) The average of the room level is about 3.46, so it’s not very useful for everyday delves, just another curious faction. You may use it as your “luck meter”: spend 1 sigil and see how many rooms are treasures and how many rooms have levels V and IV. I hope the devs won’t add another faction with such a mess of rooms.

It’s a uniform faction: more Rakshas to the kingdom of Pridelands.

About using these schemes in statistics: there is a post by @TimeKnight ( Delve's Statistic ) that shows average values of chest upgrade chances and treasure multipliers. I improved this approach and calculated these parameters for known factions, you can see results in a GoogleCalc sheet: Delves Effectiveness - Google Sheets . They may answer some questions, like “why City of Thieves is so good” or “why Duergaroth is nothing special”. Figures presented in the sheet can be not very exact due to a general approach, without deep examining all possible combinations of rooms in delves.

I improved this approach and calculated these parameters for known factions, you can see results in a GoogleCalc sheet

I saw that you include 6 new Palace rooms as well, nice!

I still updating my file privately, just kinda abandon that old post, as I don’t feel like being here anymore.

In my version, I named that 6 rooms “Wild”, as it can be anything (except Common), including Treasures. But as there are a lot of possibilities, the avarage ended up at just 1.24 multiplier. So it doesn’t make Indrajit’s Palace a good farming place. But still, it’s the only faction with 5.20 as maximum multiplier!! And I thought 4.0+ is hugh! 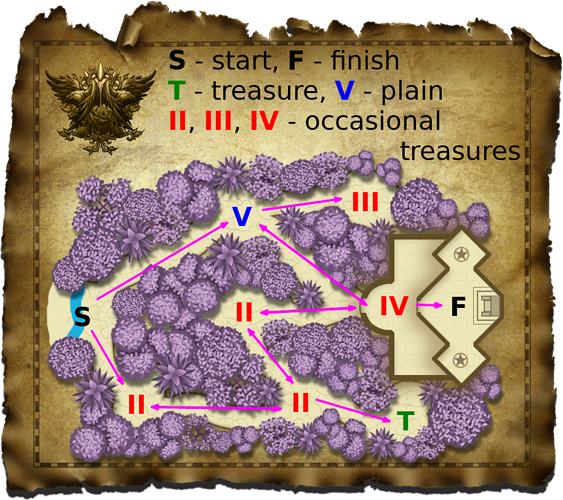 A usual faction with many occasional treasures. You can see that it looks similar to Wild Court (another Underworld flora). It’s a better version of the Labyrinth, so to say: more clear faction map and the same 2 paths to the final room: 4 or 6 rooms in total. Average treasure room amount is 2, maximum that I saw was 4.

Mark Leanansidhe from this faction, she can help in fighting Mythics. 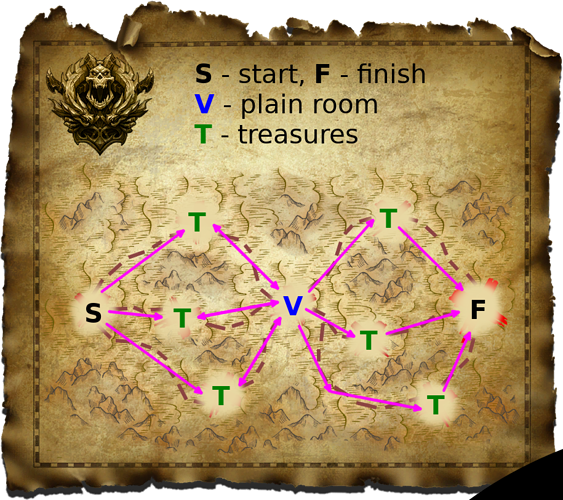 The most rich faction ever. 6 treasure rooms - that’s where you’ll want to spend your daily delve scrolls hunting for gold (and some glory too). It’s less user-friendly than the famed City of Thieves, but not very much. The map may remind you one of Lyrasza’s Lair, many ways to choose for the shortest path. The central room is a plain V as far as I could explore.

A very useful troop from here: The Great Wyrm, which creates 2 Skulls each turn.

Dripping Caverns ( Delves: all about rooms and plans - #40 by Nullings ) were updated on 28th September '21: two rooms on the south became firm treasures instead of Epic occasional treasures. It lowered average parameters for treasure multiplier and chest upgrade chance. (I doubt people were using this faction for everyday delves though.) 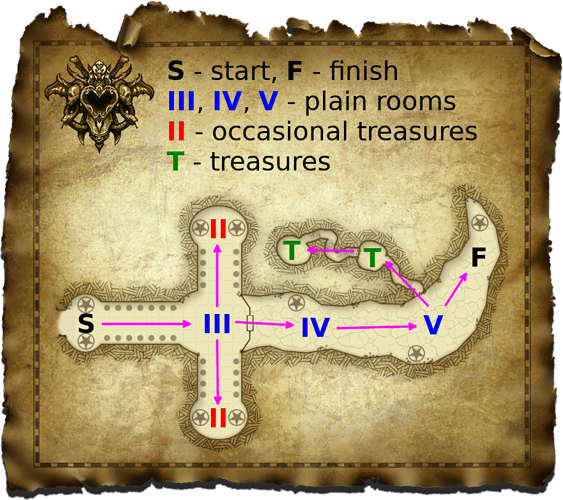 A simple faction with only one path 5 rooms long (not user-friendly), may remind about Fang Moor. Maximum 4 treasure rooms, but you’ll see both Rare (II) rooms as treasures seldom.

Useful troops here are Bile Blackheart (Legendary generator like Gorgotha) and Deathblade (pair him with some Doomskull creators). The faction weapon can be used in one team with The Maraji Queen, for example. 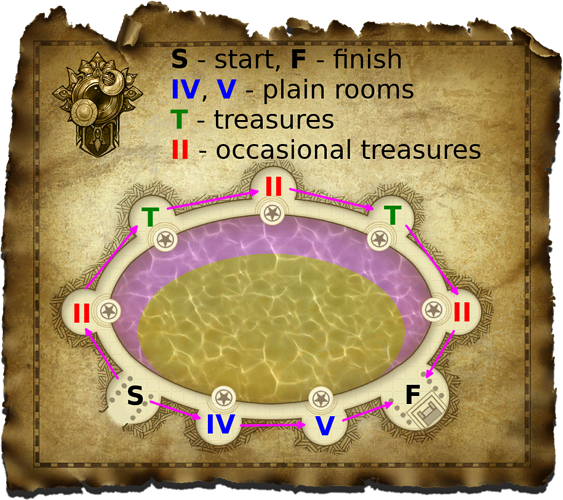 A uniform faction: more Elementals for the kingdom of Nexus.

The faction banner was changed in the last moment, and not all troops were updated accordingly. We may expect Void Wisp be changed to Green/Purple or Blue/Purple. 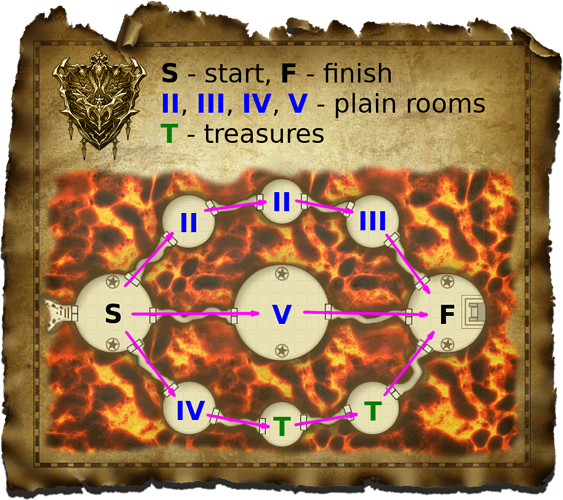 Three paths are available here, and one of them has just 1 room luckily. No occasional treasures here, just two treasure rooms in the south pass.

Useful troops are Fire Spirit (generator with bonuses) and Magma Dragon (AoE damage with Lavastorm conjuring). The faction weapon is a generator too, and it can find its uses in defense, for example.

Another uniform faction: Elementals added to an Elemental kingdom. 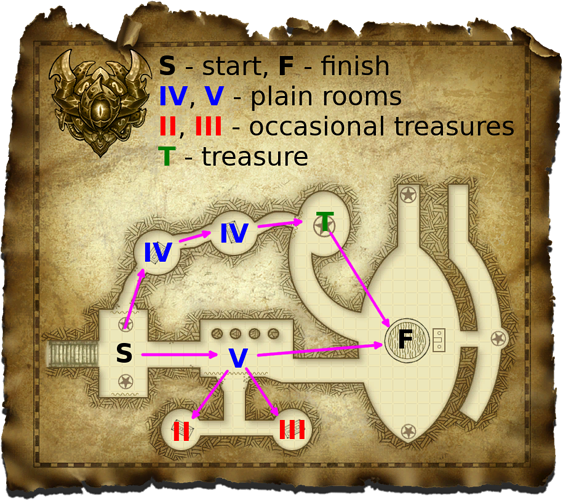 I didn’t want to mix this scheme with the regular one. The main update here is that any room can be replaced with Gnome Treasure room (level VI room with TM 1.4 and chest upgrade chance 60%, where you can meet a gnome - any except Pet Gnome). All other parameters are the same as for the regular All-Seeing Eye delve ( Delves: all about rooms and plans - #23 by Nullings ).

A fifth troop has been added to this faction: Burning Ocularen. 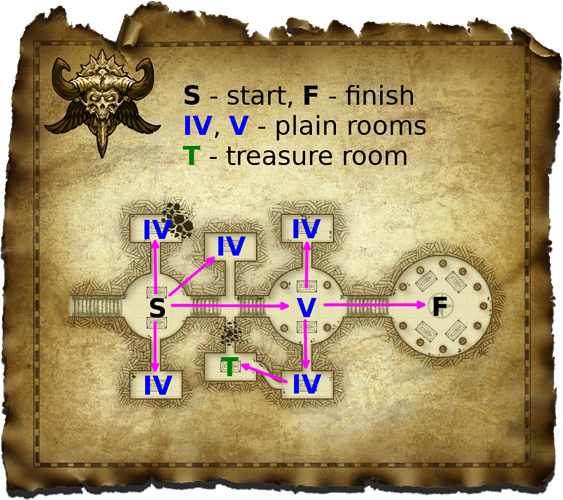 A very simple scheme without occasional treasures. Many rooms IV, but they are all plain. And any of these 7 inner rooms can be replaced with Gnome Treasure Room in a deep delve.

A fifth troop was added to this faction: Crypt Hound.

Regular Crypt Keepers delve: Delves: all about rooms and plans - #26 by Nullings 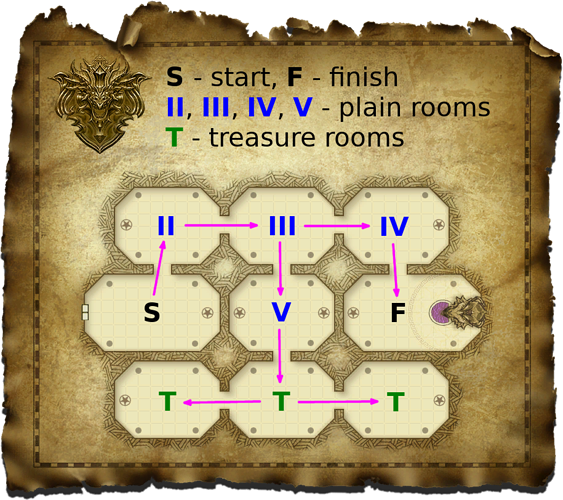 And like in Duergaroth, there are no very useful troops here. Maybe Obsidiaxas can be used in specific battles. Faction weapon is rather good as a generator. 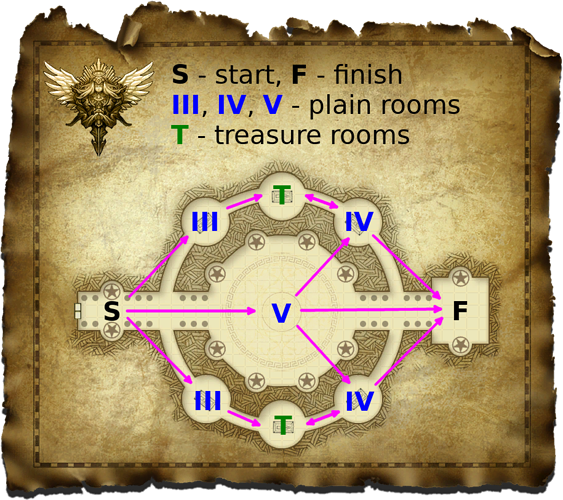 Only 2 treasure rooms here, and no occasional treasures (as far as I could explore). The most weird thing about this delve is that rooms IV are not connected, while you can reach both of them after beating room V. Maybe it’s a bug which will be fixed sometimes.

A fifth troop has been added to this faction: Guardian Pillar.

The regular delve in the Hall of Guardians: Delves: all about rooms and plans - #13 by Nullings .

The image might suggest IV & IV should be connected, but, at least on Steam, they are not.