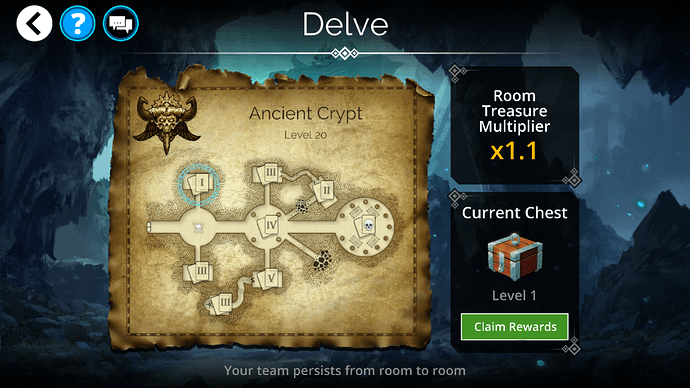 What you were expecting to happen, and what actually happened:
Defeated first Delve room in crypt keepers. Expecting to progress as normal. Next rooms did not unlock. Only option available is to collect the lvl 1 chest

How often does this happen? When did it begin happening?
First time I have seen this

Steps to make it happen again
Start a Delve, win first room, see what happens? Team i used in first room was ishbaala, Valkyrie, infernus, dawnbringer. This was my 3rd Delve of the day. First delve I used faction team, completed full Delve. Switched to this team for 2nd Delve, completes full delve. 3rd Delve is the one that froze.

A while ago I had the same thing and all I had to do to unfreeze the game was restarting the game and everything was ok.
Perhaps you can try that?
If that doesn’t work send a ticket to Kafka, he has helped me very well in the past.
You can reach him at: https://gemsofwar.zendesk.com/hc/en-us/articles/202997425-How-do-I-contact-support-or-report-a-bug-

Had this happen to me when someone turned off the xbox while I was playing. Ended up with the only option being to claim the rewards and lose the one attempt.

The game thinks you lost the first fight, otherwise the text below the chest would read “Run Away” instead of “Claim Rewards”.

I did try restarting, thanks for that tip. Interesting, I guess it does think I lost the fight. At this point I think I’m just gonna claim my puny chest and move on, missing one Delve reward isn’t gonna break the bank

thank you everyone for responses

. [edited title to reflect win counted as loss, not frozen]

@jdk Thanks for letting us know about this!

Did you see any error messages around the time this happened at all?
Were you experiencing any lag around this time?
Did anything else unusual happen in the battle (ie, defeated troop remained on the enemy side?)

What was the last move you made before you won the battle?

Hi @Kafka I dont remember any error messages, lag, ghost enemies or anything else unusual. With my current hoard upgrades all my low-lvl CK battles tend to be 1-shot w/ dawnbringer, so I can’t say 100% that was my last move but it’s most likely. I think after I won the battle I switched apps to answer a text so maybe something hung up when I did that. Sorry I don’t have more helpful info for you