Defense Color Bonuses to Relieve the Monotony of Apo/Beast

So, after I finished fighting the same Apocalypse build four times today (Psion/Something/Famine/Famine) and the “Beast Meta” build once (FG/GS/Kerb/etc.), I really started to feel this is getting kind of monotonous…

What if single-color bonuses applied to defense teams as well as offense? If there was a motivation to alter the defense teams by day, giving buffs and/or point bonuses to certain defensive builds, then you’d achieve two things:

I think it would be more interesting to pit Red Offense vs. Red Defense (or even some other color, perhaps random color vs. color per day) than Red Offense vs. “The Usual Suspects” all the time

Not saying this might not shake up the variety in defense teams a bit, this solution would still result in Faminetimesx 3 days of the GW week.

At least not in combination with Psion. That alone would be a relief.

I think it would also be interesting if they rewarded something for using 4 unique troops in defense, to try to get away from Famine/Famine, Kerb/Kerb, Fox/Fox, Kraken/Kraken, and other sorts of things. Not disallow it, but make using 4 distinct troops a more attractive option to try to break up some of these standard builds a bit more.

Psion being a minor inconvenience in this setup one that was added to it long after multiple Famine already plagued the GW meta, i am sure people will find colour appropriate replacements for that, i sure have some options in mind.

That i think is a much more interesting and more easily implemented approach.

Oh yeah i think Psion is a very potent option for the Famine teams, definitely an annoying one, i was just saying FamineX happens with or without him

but if that is also implemented, i think the whole thing would be good idea

Can you explain what you mean by abuse and complications? I’m just wondering how you envision gaming the system if defense teams could award GW points.

Well first we would have to establish what actually would award points for defenses. If it were just wins, then this change would do very little to nothing as people would still field Famines and devours to go for the point deductions for lost troops on the enemy instead of the colour boosted extremely slim chances of actually winning with a colour limited defense.

True, it would have to be some kind of fixed bonus - something like 1,000 points each time your guild fields a defense team that meets the criteria, regardless of win or loss. Some kind of value that would average out to a greater overall point gain than “win-based” points that were awarded, as you say, infrequently due to not very many defense wins. 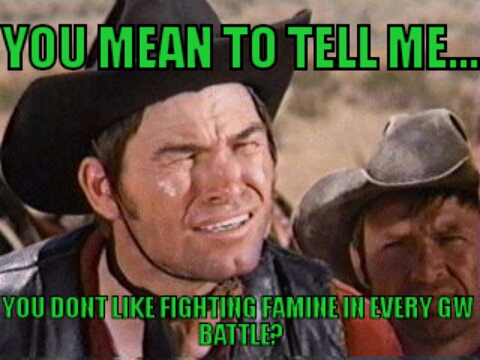 Do one for Kereboros too!

I’m not going to forgoe a chance of my defence team defeating my opponent (and reduce their daily obtainable points) to give them more variety.

Can you explain what you mean by abuse and complications? I’m just wondering how you envision gaming the system if defense teams could award GW points.

and since we do want to change the defense meta we need to rather use either 1 or 2 not the 3
(im thinking rather only the 1. would work great)

and so thats why id prefer defense team to be locked

We disagree within the guild, I think if you want variety, you cannot leave it to the players to choose among their troops. Famine DK will still be around a lot. Also single colored defense makes it a great target for freeze.
Already today the win rates are high in GW matches but the games are boring soooo boring (and forced to be played on a certain time).

I don’t think a colour bonus is working with def-teams because real mythic use 3 colours so triple famine can still be the defense for 3 days.

The problem I see is the players lose the fun in the game. To fight the same douche teams over and over again and with the added stress of being in a GW-battle it might cause some players to simply quit.

And for what do people use those teams? Some points that mean nothing. And then to kill the fun for others is even poorer.

You’ll do it if the math works out. If the points you allow the Offense to have from increased wins is less than the points your own guild gains from you fielding a particularly-configured defense, then you’ll either do that, or your guild will lose points. The idea could be that a certain flat number of points is awarded to your guild each time a competing guild battles you and your defense is set up according to some bonus - 4 unique troops, 4 same-color, 4 unique traits, or whatever. You can’t “game” that, because you can’t know when your Defense may or may not be called upon for a battle, so you can’t quickly switch it up before such battles occur.

The points would have to be enormous for it to be worth it as win rates from any other teams are so drastically low, especially mono colour.

I think, To get players to be able to field a variety of defences and have them remain somewhat challenging is to have mono colour defence teams get a stat bonus multiplier like the Warlord difficulties. Warlord 4 probably too much so perhaps Warlord 2.

Defences need to be kept challenging, not gimped by some arbitrary points system.