When you look at it like that yes not that much difference.

The death knight pack is listed in specials not in the armor menu on PC/mobile. If similar on consumes it may be the source of the confusion.

It’s under “Bundles” on the console to which is the same as Specials on PC (the real money part of the shop outside of gems.)

I believe someone did the math on the value and found that the armor was essentially free given the cost of all the other goodies in the pack. Up to you whether you want to invest $50 in the game, but it’s definitely a good value if you do.

Personally, I spent enough to get to VIP 3 and am content there, but given my playtime it would be easy to justify $50. Certainly played this more than any $60 game since probably Fallout: New Vegas or Dragon Age: Origins, and it’s probably beat those by now.

The other items are particularly necessary though. Be nice to get the armour on its own, for 5 bucks.

Here is the breakdown that @Studs mentioned.

After some discussion recently on these forums about what’s worth paying for in the game I got curious about how much things are actually worth. So I’ve put together a spreadsheet that breaks down the main in-game shop items into real world currency values. It’s still a work in progress, as I’m still missing some info on the traitstone packs that cycle around. (Thanks to @Cell for his contributions on that matter so far!) Also hoping to try and find a way to value armour and/or glory. But these…

And for those just interested in the DK part: 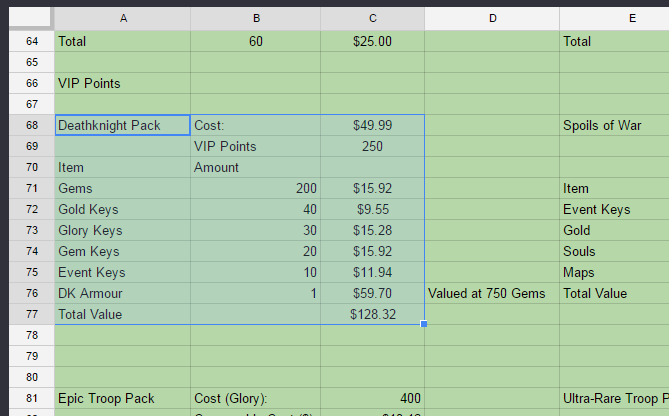 Yup, I have it. It has been activated.

Any word when the rest of us will get the armour??
@Nex @Mr.Strange @Foresti

not available for me. x1, german store

not available for me. x1

We apologize that some of you are still waiting on the Deathknight Armor DLC. Unfortunately, it’s out of our hands as to when it appears in your store. We submit the data to Sony which pushes it live at various times depending on your region.

That’s great for ps4 users but what about the Xbox one users?

Everything the Console developers do is submitted to Sony/Microsoft, who approve and release at their discretion.

Hello,
It’s Thursday after the Daily reset (if that matters) and the Deathknight Armor Bundle is still not available on the Xbox One.

PS: I opened a ticket with support a couple of days ago about the “Wild Bundle Armor” that I purchased shortly after starting. As Its still listed in my Bundles section of my Store as limit 1 (and has been for months) like it was never purchased. In the past when purchased a limit one item it is removed. I don’t know if this other armor set is interfering or whatnot…

PS: I opened a ticket with support a couple of days ago about the “Wild Bundle Armor” that I purchased shortly after starting. As Its still listed in my Bundles section of my Store as limit 1 (and has been for months) like it was never purchased. In the past when purchased a limit one item it is removed. I don’t know if this other armor set is interfering or whatnot…

I can almost guarantee that’s not related. It’s like I said earlier: We submit the update data to Microsoft, then they push it to the live servers. I’ve been trying to find out why it’s taking so long, but so far have not heard anything useful back. I’m going to keep bothering people about it, but my fingers remain crossed that it will be appearing on the Xbox store any time now.

what info have you heard?

Largely just confirmation that it isn’t on the store, which we already know.

aww, i was hoping for a bunch of text that tl;dr into it is not in stores yet but it should be soon.

I hope it will be this weekend already.

I’m still trying to find out why this happened, and we’re working to see if it can go up any earlier, but for now you can expect to see the Deathknight Armor on July 14.