I wasted 5 minutes of GAP.

Have to agree with that, if you’re planning on doing this method. I went back and found a topic where some folks were researching the reward reduction with the change in GAP. Seems to me any time over a minute should be safe.

Platform, device version and operating system: All Screenshot or image: Reference found in the following two threads: https://community.gemsofwar.com/t/gnome-a-palooza-changes/71394 https://community.gemsofwar.com/t/gnome-a-palooza-reward-formula/71425 What you were expecting to happen, and what actually happened: I expected reduced rewards from gnomes in GAP during a fast fight. However, the rewards are also reduced in a slow fight. According to @Kafka, playing 2 battles a minute won’t…

Love your stats @ALP. Thank you.

There’s obviously no point doing this with a goal of getting cursed runes. It isn’t working as it should. Evidence is clear.

I’m now up to 8 Cursed Gnomes giving VKs and only done 4 GaPs.

I did a GaP, doing PvP until I triggered a Pet Gnome. I also got one Cursed Gnome which gave 6 Cursed Runes.

After that I did Level 1 Explores in Divinion Fields with Greed, Dust Devil and 2 x Ironhawk, got one more Cursed Gnome for 2 Cursed Runes.

The Devs need to understand the difference between making resources scarce and making them almost impossible to get.

Oh and anyone who even considers crafting a Guildmate Gift of 25 Gems using 4 Cursed Runes and 50 Gems really needs their head examined!

Adding to the long list of complainers - 3 cursed gnomes that dropped keys (outside of GAP). Grrr.

I want to complain about the frequency of the Cursed Gnomes, they are not coming up as frequently as they should. For the past 3 days I have been grinding it, over 3,000 trophies, and almost no cursed gnomes. Today and yesterday I received exactly zero Cursed Gnomes. Well, today I got 1 Cursed Gnome but he gave me a Vault Key instead of runes, which is very annoying.

What’s the point of adding 10 levels to the soulforge if you cannot use them because the runes are not coming up?

Can you please make Cursed Gnomes come up more frequently? And they should always give runes, not vault keys…

PS: I usually pay the $10 dollars for the campaign, but I decided that to protest my huge waste of time in regards to the runes, I will not be buying the $10 campaign this time, unless I can gather enough runes to reach level 20 in the soulforge and craft the mythic…

it’s laughable at this point, no?

Having just lost two Cursed Gnomes to Vault Keys in the same Gnome-a-Palooza, and having lost count of the number of Cursed Runes I’ve lost out on this weekend: no longer feeling sanguine about this.

I suspect we either get nothing, or a few gems or runes in the mail, as compensation for this. But what I’d really like to see is a bonus day of Vault to allow us another crack at some of the runes we missed out on. How about a 1-day Vault event on New Years Day?

So you say if they give you more opportunity to waste time it is better than some compensation? I think you got some holiday spirit in you!

I support this idea but with the compensation, so some runes for the vault keys and a new vault event with the increased rate when they really fixed it.

I had three cursed drop keys off my last GAP, not funny.

Although my data is far less organized…
A gnome encountered every 12.5 battles. 68 gnomes encountered. 0 GAPs done.
15 cursed gnomes (including 0 on Sunday).
31 verse gnomes (almost half of which, 15, were the one I already had the most of).
22 various other gnomes (no demon gnomes, though).
Vault keys dropped: 2. Both by cursed gnomes, of course.
I do believe that’s over 100 “treasure” gnomes over the last 3 events and a grand total of 3 keys dropped. Which is pathetic.

For @Tacet to see. 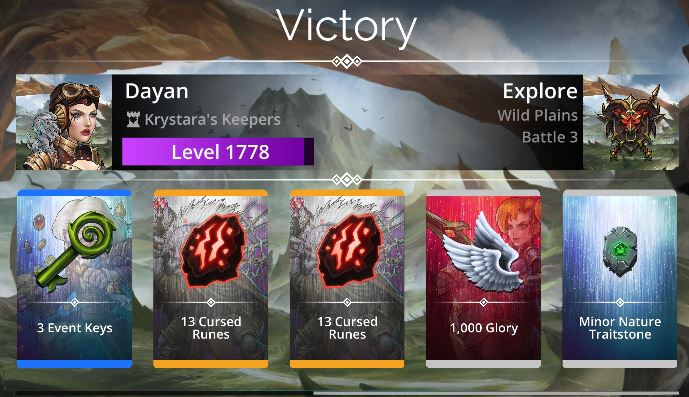 I heard someone got 20 runes from one and I thought they were pulling my leg. I then got a 25 so I guess anything over 15 is possible but quite rare.

Have to agree with that, if you’re planning on doing this method. I went back and found a topic where some folks were researching the reward reduction with the change in GAP. Seems to me any time over a minute should be safe.

I’ve not actually used a GAP since before they made the change to the reward system. What a crying f-ing shame. They really gutted the one good thing they put into this game. And the fact that they won’t tell us specifics… while I expected that, it’s still hot garbage. It’s OUR resources that we’re spending.
(Note to newbies: NEVER EVER, EVER run a GAP outside Vault events.)

That said, I used up 6 GAPs and tried:

Of note: If you do wait until the GAP is finished (I used a timer outside the game to keep track), then you do get the full rewards, absolutely every time.

In conclusion, the way I see it, it just depends on what your focus is:

That said, I used up 6 GAPs and tried:

Makes sense for E1 (or any low level explore, unless you’re beginner with super small stats) - it’s impossible to get full rewards while palooza timer is active because they either get reduced for speed or, if one waits 60 seconds as you did, for too easy battle.