Hmmmm, gonna be a long wait then…

Yup better find a side game when you are tired of gow. I know i will be playing when
RDR2 when it will be out but it’s in a while

@Rickygervais is right, settle in.
Historically its 2-4 months between updates. We just had the 3.05 very recently. You can guess from there when 3.1 will release.

Should be within 3 months at worst. @MrsAffects: And we appreciate it! It’ll help us track down new issues

Hope it didn’t cost you the day, though.

Do we need to stop disenchanting and save our extra cards for crafting?

i would suggest to save all sort of keys, if you want to save something for the crafting system, who knows maybe new crafting currency will be added to them?

Have a great day everybody! I’m off to continue work on the crafting system… nothing quite ready to share yet, as I’m still working on some of the details involving how we select which Mythics are available for crafting at any given time (since offering them ALL is something that’s not going to scale well as we move forward).

I think you should add this to the list, from what i understand, we will be able to craft certain mythic at a specific time

Nice catch, I hadn’t noticed that. Even when he says he has nothing to share, he’s sharing something.

I could see it being something around mana colour or something too. Even with 1 a week, there are so many Mythics now it would still take a while to cycle through them all.

Also worth noting that he said “how we select which Mythics are available” ie Mythic s, plural. So probably more than 1 at any one time. Yes it could be a typo, or it could change, or I could just be reading way to much into this, but still felt it should be pointed out for now

thanks, added the quote you found to my “what we know” list

Not sure if it’s related to Crafting but as Crafting should come with the next update and:

This should be fix later today (as we’ll be putting fixes out for King Mikhail and kingdom weapons) A couple of new troops for the next update manage to sneak out with Urskaya without us realizing.

The “new troops” are named “Troop_dungeon”…

Assumption: the new game-mode that Sirrian told us about the new currency could be dungeons: a set of fights + a boss battle.

@death beat me to it!

Bro i hate this answer lt could mean 5 month

Btw i prefer alpheon, at least he’s not affraid to answer

Next is the crafting system - the Soulforge.

Here is a first screenshot of crafting. I’m not going to go into any details on crafting TODAY (more coming on that later), but just wanted to give you a teaser for the various bits of crafting! Crafting needs a new resource called JEWELS, and Jewels come from the next item down… 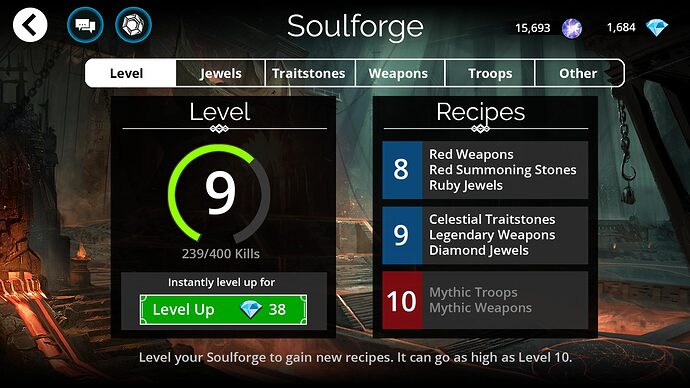 Full disclosure: Another mockup, though we have this screen working in game now, and it looks like this one! Also… numbers on here WILL change!

Now there is something!

so… the crafting recipes are obtainable by… kills?

Hopefully not mini-boss kills in the dungeon. That would take a while at a maximum of 3 per day.

I wonder what that cube icon next to the chat icon is, upper left.