This part I like, actually, except for agreeing it shouldn’t be a medal at all, but just a universal buff. But I often forget medal loadouts— a helping hand is appreciated.

They know exactly what they are doing, from their perspective on the matter. This is going “in” on weekly event monetization, while requiring players to hard invest in weekly shops, pets, deeds, and every other advancement system in the game to the max to scrounge up enough stat points to even be viable in an event.

Oh… and wasn’t it already said that there was going to be a full shop price Invasion event this weekend? Good times, ahead…

Thanks as always for your discerning perspective, even if it’s bad news, it sort of makes you review your future involvement in the game. Managing gems is going to be (it appears) much more difficult and 2 bad Mythics in a row destroyed my previous months of management!!

My overriding choice has been to not ever Mythic a pet, never buy past T5 (now that will be T3, maybe 4) on new faction delve weekend, occasionally go T2 (but been doing it mostly at T4/5 recently) in bounty and never go past T4 in any other event, T2 weekly faction. That strategy costs me gold and hoard, makes it difficult with insufficient treasures, but saves gems and time. I will aim to complete all delves without potions, but that still has some ways to go.

This new format obviously has been reviewed by the developers and it follows that they want more gem expenditure, so bottom line every player unless swimming in gems or want to invest wads of cash, will have to make stark choices, as you explain.

Just throwing a data point out there for reference. 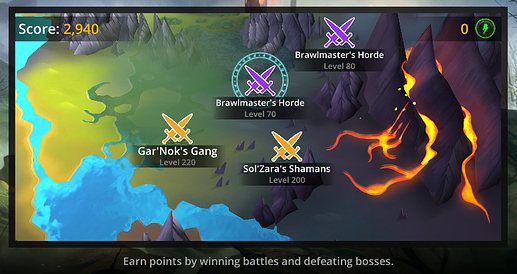 This is what my game board looks like after Day 1 with a Tier 6 normal “full shop” purchase. No losses, no missed ravens.

Multiple event medals do appear to stack. I’ve done some ridiculous damage amounts on skull matches stacking event medals with Earth’s Fury/Mang. High-level dynamic difficulty modifiers causing those (in)famous skyfalling skull matches are hilarious to watch on the player’s side when they happen, as the other side just fall like bowling pins on 4x speed.

My Tier 4 purchase got me here:

Not pictured of course is the other fights, like Gar’Nok’s Hang and Sol’Zara’s Shamans and the Mythic one. Those are around level 100 for me, but of course the game gives you no way to view those unless they come up as a choice.

I wish, but no averaging around 4 skulls a match now I think.

So I just learned about the medal popup. What exactly is the point of THIS level of stupidity?

This was discussed on the beta thread?

This was also discussed on the beta thread, on stream, and in the patch notes?

We will be looking into an alternative means for players to switch between medal loadouts in a future update (most likely from the World Map menu), so players don’t have to go into the medal menu every time they wish to change loadouts.

The devs couldn’t find a solution that they were happy with in the UI on mobile devices by the time the update had to be pushed out the door to be on schedule. Hence, the commitment by Salty to work on this for a future update.

That said, after playing with this on Live for a bit, I think similar to unique Event-only Team slots, there should be unique Event-only medal loadouts (now that multiple loadouts is a thing). It’s driving me up the wall every time I go into the event and then back out, that I forget that these event medals do nothing outside of the event and wonder why my team suddenly was so weak.

Im fine with a limited amount of medal loadouts. But they should be available to assign to each team, for reasons like @Lyrian said, so you dont realise you are using the wrong medals mid fight as you have 0 way to check outside of the world map.

I know devs have said no to medals being linked to teams, but they also said no about classes linked per teams.

Simple things like in GW, setting medals for a def team is part of the team. If you then change them because of an attack team, and event, a delve, 1 of any other mode that they will effect, it changes the difficulty of the GW battle for the person who fights you at that time.

Changing it either on the team troop menu where you set banners and classes, or setting it when you are going into fight the battle so you can do a last sec check is needed.

So in a nutshell it’s a mode that wants you to chase the shiny new medals at a cost of epic scaled purchases to bag all rewards so you can convert your medals onto other medals to chase Geoff’s carrot. BUT how much each player will need to spend to do his or her “share” is anybodys guess. Rewards are same old rubbish tbh…portraits and major growth orb ffs. And the game is dull. I prefer the old raid and Co tbh. Plus, how can doom possibly become a weekend gig when organised scouting and comms is fundamental. There’s no time to do what’s needed and new factions need to be slotted in somewhere too. Forget constructive feedback and all that jazz…this is fecking shite.

What really baffles me as well is that in the Guild tab, we get “Collectibles” and Score: 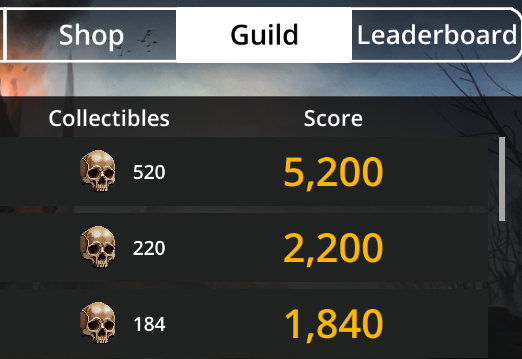 But on the leaderboard we get Battles Won and Score:

My score is listed in the Overview as well: 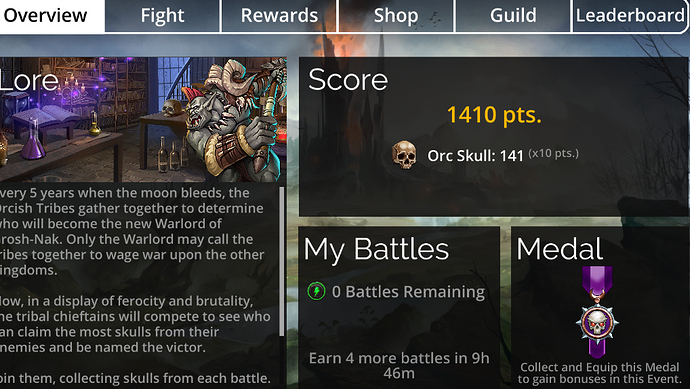 And the score is what determines your guild rewards threshold and your ranking on the leaderboard: 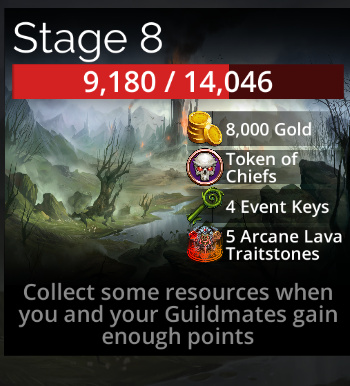 …which leads me to ask, why are collectibles listed under Guild when Collectibles is just how score is calculated? It’s no secret that for every skull collectible, you get 10 points. So, yeah, duh your score is going to be ten times as much as your skull count. But then on the individual leaderboard, there is no mention at all of skulls earned. Of course we know that, for instance, if first place has a score of 18,010, that means they’ve collected 1801 skulls. From that we can further determine that they’ve collected an average of 8 skulls per battle.

From that we just have to assume that the skulls per battle slowly increases the more battles you do, but unless your guildmates are on the leaderboard, you won’t see what their average is.

“Collectibles” under Guild should be replaced with Battles Won, like it is on the Leaderboard.

Have to agree, this design is incredibly confusing.

I mentioned in another post that there needs to be some sort of maker to distinguish bosses. Apparently, that wasn’t important enough to include in 4.8. Seems pretty important to me!

I’m pretty confused how this event works. It’s not very clear or intuitive. The map changing regularly threw me off, too.

What would be handy on each version of this event would be an Info tab.

On there, it explains, in plain terms, what the point is.

For every X you kill, you get 1 “Event Collectable”. This is then x10 to get your score while will help unlock the guild rewards.

During this event you are able to use “limited team building choices” for both troops and weapons. You can use any class but “Class related to weekly event” works best for those troops. (if needed)

Lore is all good, and its great to read and get a backstory, but not at the cost of knowing what it is we are meant to be doing in the event.

I’m extremely confused. Level 15 battles… and a level 10 battle with the same name… 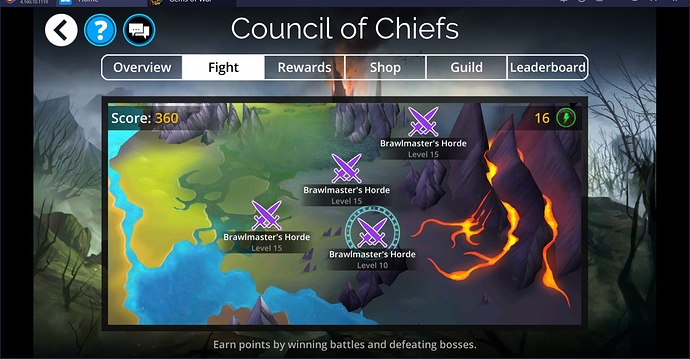 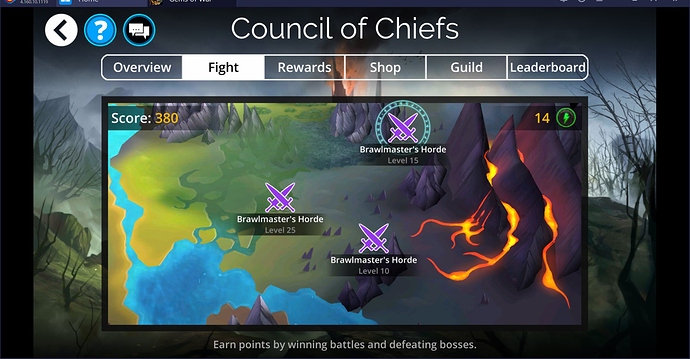 With how long major updates take to release, it’s really a shame that things aren’t more refined when we get them. The whole theme of this update is the event system, and it seems not only confusing, but broken.

As for the scoring and everyone going crazy.

This is about everyone in a guild buying to tier 4 and not being able to complete the event.

It may work like raid boss with the scoring. The higher the level the more skulls on average you collect.

If you calculated day 1 tier 4 purchase on raid boss for a guild you would also not be able to complete all rewards.

No. Look at the leaderboard, people with 100 battles still haven’t reached 6000 points.

Tier 4 will only get you 84 battles total for the week including valravens. About 3500 points approx.

This event will require all 30 members to buy Tier 6 or 7.

Raid and Invasions could be done with all members buying Tier 3.

As for the scoring and everyone going crazy.

This is about everyone in a guild buying to tier 4 and not being able to complete the event.

It may work like raid boss with the scoring. The higher the level the more skulls on average you collect.

If you calculated day 1 tier 4 purchase on raid boss for a guild you would also not be able to complete all rewards.

Unlike Raids or Invasions. It seems that RNG determines how many points we get. Which it’s clear that Gems of War vision is to have everything determined by RNG. Slots of War may be a more appropriate title.
While other companies are getting away from loot boxes. I+2 seems to keep leaning towards them.

If things don’t change. Outside of the folks chasing the Leaderboards. No one is going to buy past tier 4 (the weapon) for this new shittiest of shit events after this week.

I want to like your comment. But the choice to replace an “e” with a " ’ " is something I can’t endorse. I’m good with everything else though.

This dev team got bought out by the Kolkata refund scammers. There is no other explanation. They use the same tactics…

If this is how things are going forward. I’m done.

I think if the devs had sponsored a competition to design the least interesting event possible, the Council of Repetitions would have scored really well, if not won outright.

And to think, a week ago I was excited about there being a new event. I was picturing something like delvs, with new game mechanics and new strategies, and not this current lame mess.

In the gow support page on world events it suggests buying tier 3 for the weapon lol.

From the page:
If you want to spend the least Gems possible, try purchasing to at least Tier II so you can get at least 1 Event Badge to equip. If there is a special Weapon avilable you may want to purchase to Tier III instead.