Extra brownie points to you if these troops can be fixed without another full update!

Sorry, we’re looking into the other bugs, but wanted to address this quickly to ask if you could please provide the video? We’ve run some tests internally with them and they appear to be working correctly.

What he’s saying is the fewer troops that ate left, the less damage Bul and Rowanne are willing to dish out. Bul’Tauros used to be a 2:1 ratio so maybe it got stealth-nerfed but Rowanne was AMAZING at a 2x armor ratio; she got me to 8th place on the PVP leaderboard early on in the PVP board’s life. Hopefully she wasn’t nerfed because I may have to call upon her mighty thorns once more.

Sorry, not very good at this but here goes. There are a number of videos at the bottom. You can just look at any video that has Bul’Tauros and Rowanne in the opening screenshot.

Spotted on PS4: Ascending a troop displays more than its maximum
I used some event keys and got some more Mantis Warriors, so that he could be ascended.
As usual, with ascending, I press the left trigger to go to the maximum, and it displayed something like 11/10, something which I haven’t seen before. When I ascended it automatically ascended my troop, and the extra troop to, so that I didn’t have to ascend twice?

That is correct! We added the ability to ascend to any higher level in one go, assuming you’ve got the cards of course.

One more QoL feature I hope people will enjoy. (We also fixed the ascension bar not actually changing to the correct colour for the next ascension, which I think we can all agree is the real win here).

Spotted on PS4: Most excellent patch that adds new stuff

We’re looking at addressing this grave issue in a future update.

@einsteinle: Excellent! Thank you very much. We’ll investigate and see what’s causing this.
Edit: We’ve found the cause and I’m sorry to say it will be a full update required

Very sorry about this. Fix for another bug caused this one, which we unfortunately didn’t catch.

Unlike some others here I will not start picking on devs or helpdesk operators, but I would realy like to play a normal game again.

Rowanne is definitely broken. She’s not even wiping a team of mechs on normal difficulty with 45 armour!

And should a satyr musician have the same sound effect as elywyn? He’s got a lute, that sounds more like an electric guitar, but too many troops share sound effects. It’s a bit of a cop out imo.

PS4… New issue that just started today. Every single time I try to open the chat my game crashes and restarts.

Impossible to access to guild chat now. (6 circles turning indefinately and forced to reload game)
Also sometimes the guild roster dont appear, that was already the case before update. Closing menu and reopening it fix the problem.

Yeah the chat is still completely broken on Xbox. Endless loading and it often freezes the game

Chat is even more broken for me than it was before. When I try to load chat, it brings up a blank pop up and makes the game behind it look distorted. The worst part is, the controls no longer respond in game and the only button that works is the Xbox button. I can not select either blank button on the prompt or push B to cancel or any other combination. All dpad and analog directionals, A,B,X,Y,L1/2,R1/2, ect do nothing. When I push the Xbox button, it will take me back to the dashboard where I can close the game and restart it all over again.

This happened to me 3 times last night immediately when I would click on in game chat. A fourth time I tried and the chat loaded. 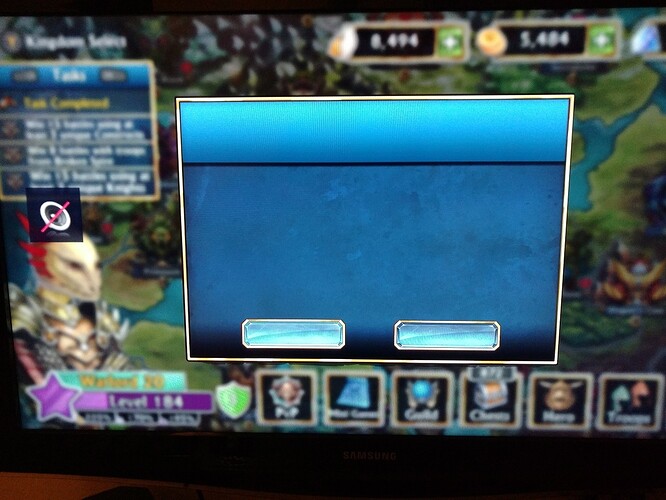 Has anyone else been having issues with “this battle has already finished” errors? I hadn’t seen this since the server migration was completed, but my wife and I are both getting tons of these when we play ranked PVP since the update. We’re on PS4 in Canada.

I had it happen once on Xbox last night while doing PVP. I had already won the match, but it counted it as a loss.

Horrible day to play today on xbox, chat is broken and if you push the chat button while you do pvp fight (kinda my fault bad habit) you still can finish the match but you will need to deal with unstopping loading animation in center of the screen so you don’t see gems under and if you try to do magic the game will freeze and in the top of that you win fight and get lost and now i just finished a pvp fight and getting server error problem, so gonna be another lost

Hey guys, looks like the chat servers are having issues on all problems. We’re currently taking a look but don’t have an ETA for a fix at this time.

Chat should be back up.

Dragon souls magic says 8 damage x 3 dragon troops.
I had 3 other dragon troops and the damage was 20.
It should be 24 or 32 if counting dragon soul also.

Thanks for the reports, we’ll investigate them and add them to the list.

As far as we’re aware, Freeze & Stun should be working as intended. If you could provide a video of the behavior you’re seeing, it would help us track down what the issue.

@Xbox_guy: This is the correct behavior. The tooltip can be a bit misleading, but the damage is calculated as the number of dragon troops x3, including The Dragon Soul itself. Which would be 12 extra damage on a team with all dragons.

I shared a few clips and screenshots on my xboxlive account Michael6369. I can make more if you want as it is persistant.
Also applied a ticket to zendesk @Lila36