New Campaign Begins A brand new Campaign begins today. Investigate, alongside Keghammer, a brand new type of Giant that has mysteriously appeared in Krystara. New Heroic Gem: Giant Gems During this Campaign, we have a new Heroic Gem that players may encounter in puzzle battles – the Giant Gem. Giant Gems when matched with their…

Campaign Tasks: We have reduced the effort required to complete Campaign Tasks, where possible, by about 25-35%.

Campaign Tasks: To keep these inline with the new changes for the regular Campaign Tasks, we have reduced the amount required to complete these tasks by a similar amount.

I think there might be something missing here, what tasks is the second paragraph referring to?

Happy to see some dragonite in the rewards

As for the giant gems: Not the most annoying thing you ever thought of. I’ll take it as a win.

While looking at all the possible rewards throughout the 10 weeks I nearly drowned in Dragonite. Uiuiui. Don’t get me wrong - I appreciate that some Dragonite got added, but tbh, that change compared to the overall Dragonite needed is so slim noone playing daily dungeon or buying daily Dragonite will even notice it. Thanks anyway, but hiding most of it behind elite+ is a shady move. Carrot and stick?

About the reduction of efforts needed for certain tasks, I’m curious if the called %ages will indeed work correct and also which tasks are even affected. Hopefully we have data from previous campaign(s) to compare if everything is working as announced. Lets be hopeful. 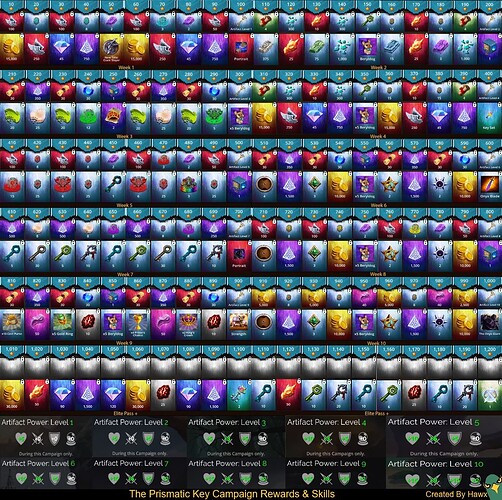 Yeah I’m on it, will just take a little bit for the bot and the graphics to reflect this due to work commitments today

So who have won the “Design the most stupidest troop” contest this time.
Creating uber doom skulls when taking skull dmg trait?! So the enemy can beat me more with even better skulls. Gratz!! lol

I said the same thing in our chat.

How about creating doomskulls when I do skull damage. Not take…

Whose idea was that?

Please say it’s an error in the trait description.

Well, there’s precedent for that

But we get some dragonite and cursed runes at least.

And yay for lower requirements for tasks. Gotta give credit where credit is due.

But that troop though… Either goes in the trash fully upgraded - for the kingdom stars - or will be a mythic with only two traits.

I added them up (approximately, skipping traitstones and underworld treasures and no doubt including some mistakes)

Definitely appreciate the reduced campaign tasks. It was getting way too busy.

Thanks. I never paid super close attention. I just know we have usually always got at least +4 magic by the end of campaign.